Home/Internets/Humor/Punching Down: Behind the Babylon Bee’s practice of Christian Mockery 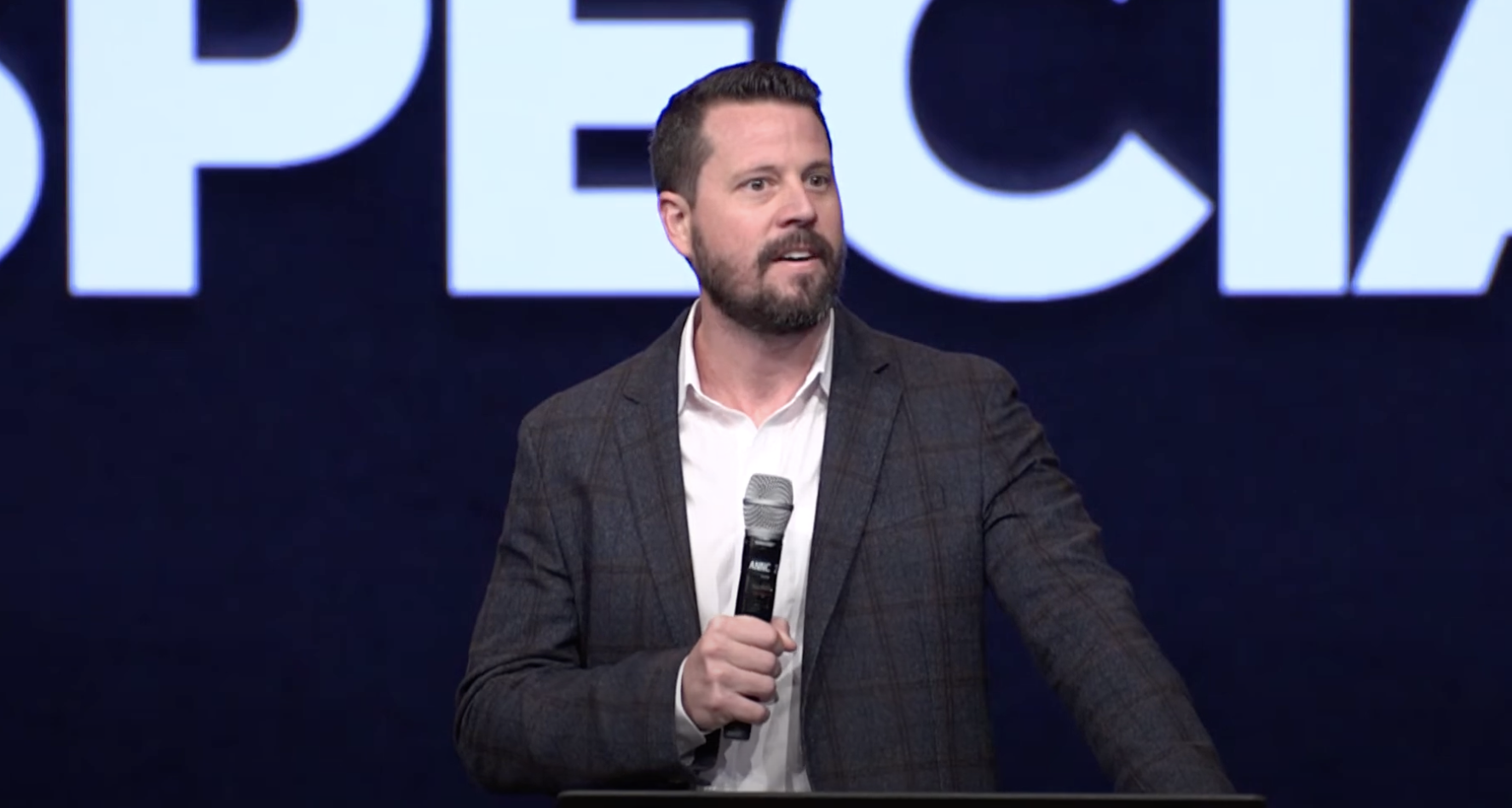 After being banned from Twitter, the CEO of the Babylon Bee reveals why they punch down at marginalized groups instead of focusing on the powers and principalities.

I think I have a good grasp of how humor works. While I was growing up, my dad worked as a professional clown (birthday parties and corporate events, not circuses, mind you!). For my formative years, I saw firsthand how he handled humor. It was his job! He’s still one of the funniest people I know, though his humor has become more subtle and off-hand than meticulously crafted. Also, I survived middle school with a clown as a father–so no one can make fun of me for it now.

In my four decades of watching and learning from him (I still hear his voice coming out of mine for children’s sermons!), I never once saw him demean or make fun of someone in a way that would hurt them. Even if he knew the person could take the heat, he found a way to have even the roasted walk away feeling like something funny happened.

I wish the people at the Babylon Bee grew up learning about humor from my dad.

The Babylon Bee is an allegedly-satirical conservative Christian website that pokes fun at religion and politics in headline and story formats. I admit I chortled at many of their articles and takes on things. They write from a conservative Christian viewpoint, but since I grew up in the Bible Belt, I can usually roll with the one-sided nature of their humor.

Unfortunately, over the years, in addition to taking potshots at the religion and political zeitgeists and personalities, the Babylon Bee has consistently made fun of transgender persons. Over and over, like a crutch that they needed to lean on during a slow joke day. Even as I write this, the front page of their website (which I won’t link to) has a hateful transgender article. I would tweet against those types of jokes, saying to fellow clergy “friends don’t let friends share the Bee.”

Finally, in March 2022, Twitter banned the Babylon Bee, in response to their unrepentant misgendering of a trans woman.

Five months later, I saw the CEO was giving a talk to a megachurch in Virginia, and I tuned in to see if the Bee has learned anything.

Spoiler alert: They haven’t. In fact, they have doubled down on what I find to be a dangerous philosophy and fallacious theology.

In August 2022, Seth Dillon, the CEO of the Babylon Bee, was the speaker at a young adult-oriented worship service at Cornerstone Chapel in Leesburg, Virginia, USA.  You can watch the video here (speech is minute 31 to 80, then an interview-style conversation after) or read about it in the Christian Post. There’s a lot I disagree with in this speech as a pastor, advocate for LGBTQ+ inclusion, and humor aficionado.

But where I want to spend my time on today is his response to exactly what I tweeted against them for years: that Babylon Bee is punch-down frat humor, not real satire that punches up. They make fun of the marginalized in society in ways that don’t land the same as making fun of the powerful–and in particular, making jokes at transgender persons’ expense.

Mr. Dillon spends several minutes of his speech characterizing and defending himself against this allegation of “punching down.” Quote:

The rule that is weirdest to me—that I reject wholeheartedly—is the idea that “comedians are not supposed to punch down.” They are saying “you are not supposed to joke about people who are beneath you, who have less power, less privilege than you. If you do that, you are punching down.” It’s a really weird situation to be in as a comedian or satirist, to be thinking to yourself, not “is this funny?” when you are writing a joke, but “am I making fun of somebody who sees themselves as being more marginalized and oppressed than me, and is going to be offended by that, are they going to think I’m punching down at them?”

So that’s Dillon’s characterization. How does he respond to it?

Imagine how condescending it is to think to yourself “I shouldn’t joke about those people, they are beneath me” (laughter) That really puts into perspective, doesn’t it? ”I’m better than them, they are down here and I’m up here.” If we are all created equally in God’s image, then shouldn’t we be able to joke about each other indiscriminately? Right? Isn’t that the way of treating each other equally?”

So we have here the Babylon Bee philosophy and the theology. Let’s walk through both of them.

Jesus warns against punching down

Dillon claims that all are created equal and should be satirized equally, but in Matthew 23, Jesus condemns those who claim to be religious and pious but fail to care for their neighbor. He says “they tie together heavy packs that are impossible to carry. They put them on the shoulders of others but are unwilling to lift a finger to move them.”

The transgender community already has heavy packs that are hard to carry. The transgender community is constantly an object of bias (especially from Christians), of political legislating against their civil rights, and of violence—especially violence against BIPOC trans women.  Even well-meaning progressives and the gay community are re-learning hospitality to gender and identity considerations.  The journey of being a transgender person is beset on all sides, and those who I know personally are amazing people.

Scripture is very clear that placing burdens on our fellow humans, and then turning a blind eye to their struggles is the work of “hypocrites” and those who Jesus likens to “whitewashed tombs.”  For Christians to claim they have the right to add to the burdens of transgender persons by ridicule—and then wash their hands of responsibility by claiming “equality”—is a sin.

While I have good preacher humor, it’s not my primary voice online, so I needed to enlist some help to respond to the Babylon Bee. One of my favorite online accounts (and “friend of the blog”) is Unvirtuous Abbey (Twitter, Facebook). I reached out to them to get their professional and well-practiced opinion on this “punch-down humor” question.  Here is what they wrote back:

Like a lot of people, too often I see the Babylon Bee retweeted into my timeline. What is worse than “punching down” for me is how they craft their cruel humor to make it appeal to a broader spectrum of people on social media who represent the majority of Christians–as opposed to honoring the people who bear the brunt of the “humor” with further dehumanization and harassment–because it’s all in good fun, right? Wrong. Their “punching down” is the soul-killing feeling of being targeted by the majority for the sake of a laugh,  rather than being lifted up and welcomed for the sake of your dignity.

What the Babylon Bee cannot seem to distinguish is the difference between “laughing at” and “laughing with.” The “power” and “privilege” that the Babylon Bee wields are weaponized with their approach to humor.  It becomes the Gospel at gunpoint. What the Bee writer misses time and time again with each cruel jab at those whom he perceives to be ‘beneath him’ is this: God loves them too.

I honestly had been expecting a joke in the Abbey’s response, but the seriousness of the reply speaks to the ongoing harm taking place.

Humor Alongside, not Against

The reality is Christians understand good humor. Even though I’ve had personal beefs with Jon Acuff, his humor targeting the conservative Christian culture is appropriate because…he’s part of that culture and satirizes it, not mocks it! He’s making fun of things in the culture alongside him.  He shares the distinction in a 2010 interview:

There’s a world of difference between mockery and satire.  Mockery has a victim. Mockery’s goal is to hurt and wound. Satire is humor with a purpose. And my ultimate purpose is to share the love of Christ.  The bottom line is that mockery is a great shortcut to laugh but it removes your ability to speak and love later…My goal is to make this huge mirror that is big enough that we can all look in it and go “hey is that us? Are we okay with that? Is that what love looks like?”

Sometimes a community can take outsider criticism and reclaim it. The early followers of John Wesley were disparaged as spending too much time reading the Bible and analyzing their lives that they were too “methodical” and they were…wait for it…“methodists.” Now you know where the name of the Methodist tradition came from! I’m glad they chose this one—the other term lobbed at them was “Bible Moths” and that would be super weird to put “pastor of First Bible Moth Church” on my LinkedIn.

These examples and myriad others show Christians can use humor and satire (heck, Jesus used them often) and use them well. So why is Babylon Bee, which does traffic in the above on occasion, so mocking and condescending towards transgender persons in particular?

Later in the speech in Virginia, Seth Dillon claims the Bee isn’t punching down at transgender persons; in fact, they are…punching up?

*deep breath* Okay, so here we get to the root of the problem: they reject transgenderism in its entirety. So it’s hard to believe the professed theology of “God created everyone equally” when you believe an entire group of people are outside of the human condition enough that you can mock them relentlessly.

So this philosophy betrays their bias that there can be no punching down because conservative Christians are always down. They’re always being attacked or persecuted. It’s a powerful defense: it is ingrained in a conservative Christian tradition, and you can misuse every other chapter of Scripture to support it.

So it’s an impasse: Conservative Christians can never accept the humility and responsibility that they are on top so long as they support media companies and attend churches that constantly claim they are at the bottom and oppressed.

As the United States takes more steps toward White Christian Nationalism and Dominionism, I’m fearful of what this type of humor will become alongside such extremes.

Called to be Equitable Opportunity Offenders

Someone once asked Jerry Seinfeld of the long-running Seinfeld show—a show that depicted many situations that are just not funny today, such as an entire episode of Native American jokes—someone asked Jerry Seinfeld if comedy is dead because of “people being too sensitive.” Seinfeld responded in the negative, saying no matter the situation or the sensitivities in it:

There is always a joke. You just have to find it.

We are called to do the work to find the joke and take responsibility for it.

People like the Babylon Bee want to hide from responsibility behind being equal opportunity offenders. But I believe we are called to be equitable opportunity offenders, focusing our satire on the powers and principalities and laying off the marginalized. We are called to make the powerful uneasy and unmoored. We are called to make fun of ourselves and our people to provide relief to the oppressed. What we are not called to do is to throw burdens on others who already have so many. What we are not called to do is write for the popular so that we get name-dropped by the powers and principalities. Satire is there to provide insight to the rebellion, not appeasement to the powerful.