Home/Internets/Why the Christian fixation on Haters? 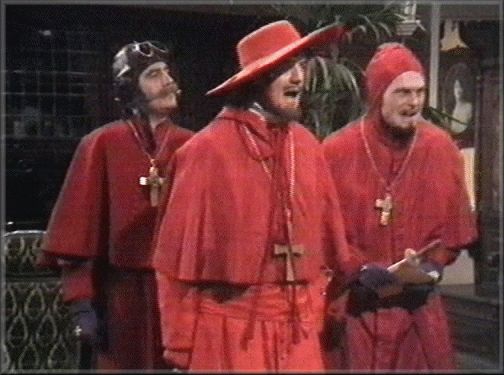 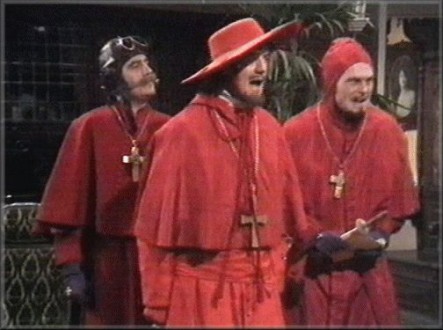 In the past month, two big-time evangelicals on twitter have referenced “haters” when it comes to dealing with online folks. Once is a phrase. Twice is a pattern. Why is this?

The first one is tragic, actually. Rick Warren, pastor of Saddleback Church, lost a son to suicide. Because he’s a high-profile person and gained some enemies thanks to his support of Proposition 8 in California…plus the fact that there are absolute jerks on the Internet, he got a lot of unsympathetic and hateful comments. So he responded with this tweet:

Grieving is hard. Grieving as public figures, harder. Grieving while haters celebrate your pain, hardest. Your notes sustained us, thank you.

Understandable. I read some of it, and it was awful stuff. Although there were also people pointing out difficult truths…but it wasn’t the right time to do so. So hate = bad bad stuff for our first example of Rick Warren.

The second example was much more personal…because it was about me.

Jon Acuff is the blogger for the popular Stuff Christians Like page that became his own named website. Very hilarious guy, regular tweeter. In fact, he live-tweeted every episode of The Bible TV show recently on the History Channel. I was also live-tweeting it and saw that while I was being snarky and pointing out errors that I thought violated the biblical account, Acuff never once questioned or even referenced the series’s adaptions of the biblical text or the outright errors made on it.

So I called him on it and asked him to contribute an assessment of the series’ inaccuracies (which I would think an evangelical would be bigger on biblical literal interpretation than progressives). So here’s our exchange (the instagram link he posted is here and no, he sent no other tweets in the interim nor did I see anyone else that he would be referencing). 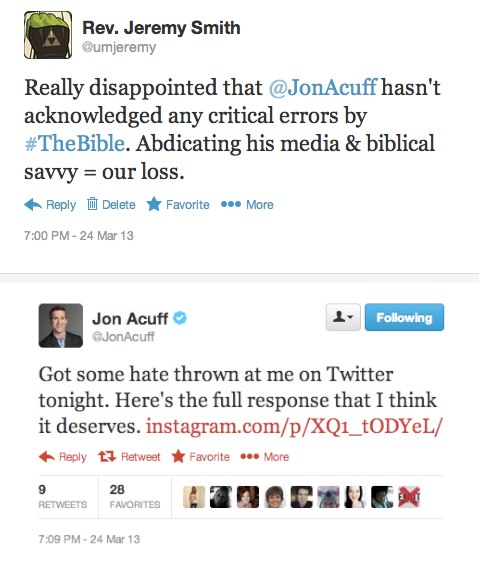 Acuff has called out “haters” on his blog before.

Those are all good reads, but in none of them does Acuff really define how to differentiate between hate and critique. So I have no idea if I fall under his rubric or why my question–combative as it was, I was honestly asking why he glossed over all the errors when he points out errors in media and bible depictions all the time–qualified as “hate” to him.

It could be that Acuff is drawing attention to his new eBook “Haters.” Maybe he’ll have a definition in there. Maybe my request (even if strongly-worded) falls under the term haters. I’m not really willing to pay $15 to find out.

But I do wonder…as Christians become bigger voices and larger personalities, does their ability to distinguish between hate and critique becomes more callous. If Acuff and I were both Christian leaders in a small town, critique would be more personal even if I just showed up on his doorstep sans relationship with the comments. We both share the same ministry area. But online, our shared Christian ministry as fellow believers in Christ and perpetuators of His word is less obvious, maybe even not acknowledged by both parties.

Maybe we aren’t even on the same plane. I’m a mere local church pastor that has a blog. I have, currently, 2,200 twitter followers whereas Acuff has 152,000. We have very little in common other that our shared interest in Christianity and media.

We are all connected…and I wonder if the more people we get connected to, the less connected we are to our shared status with one another and the easier it is to lump groups of people together who do not share the same heart.

Prayers for the haters, and for Warren, for Acuff, and for all those who struggle with being in the spotlight and what it means to those of us on the margins.

Thoughts? How would you define “haters?” And what makes them different from folks–even strangers–that offer critiques?