You are here: Home / Church Talk / The Anointing Card: The Christian Free Pass for Trump

We cannot excuse Trump’s violations in the past and present because of the possibility of a political deus ex machina in the future. 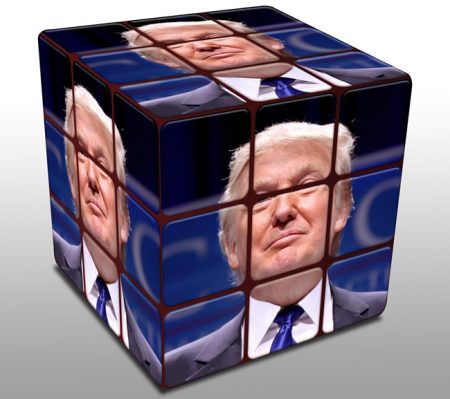 The Jaw Bone of an Ass

As a Christian, I have to say that Christians drive me crazy.

Crazy enough for me to waste a blog post on American presidential politics in order to correct a Christian sentiment that I believe is fatally flawed.

After the video of Trump’s 2005 discussion of sexual assault was shared by the Washington Post, I saw an uptick in one meme that I had seen only sporadically in Christian circles before. Here’s the clearest example set in the context of encouraging folks to support Trump over Clinton, even after the video aired:

It’s all about anointing. God anointed many through life who were still being refined and defined. Their carnality did not stop the plan and the anointing for the project.

God used the jaw bone of an ass to destroy 1000 men in the hands of a man who had a weakness for Philistine women. God used this man to begin to deliver Israel from the hands of the enemy.

God did not and never anointed Jezebel. One is carnality, yes, but God works with our carnality ever moment. But the other is wicked and evil plot to gain control.

There are many versions of the meme, but they all center around anointing and Samson or some other biblical character’s sins being excused because of what one action they did for God.

Here’s the basic framework: God uses flawed people throughout history to protect and build up God’s Chosen People. Throughout the Old and New Testaments, we see Moses killed a man, David killed a man and married his widow, Jacob was a liar, the Apostle Paul spent his life murdering Christians, and even Noah got drunk first thing off the ark. All of these people played powerful essential roles in the history. This is absolutely true and inspirational for all of us who are not perfect.

The historical character that the Christian Meme above refers to is Samson, the Sunday School character who was super-strong until he was seduced by Delilah and lost his super-powers on the barbershop floor. Samson was blinded and enslaved, but regained his power in time to push over some pillars and cut off the head of the Philistine’s leadership.

But before all that, Samson broke several rules and took a Philistine wife–which was against the Covenant. He had serious flaws and killed thousands of people, but that’s all okay, the story goes, because he chosen by God for that purpose–and the people he killed were a rival tribe anyway.

For the full story, read Judges 13-16, with chapter 16 as the best-known part of the story.

By now you can see the political message. If Trump is like Samson, then his alleged violations and indiscretions–bragging about sexual assault, leering at Miss Universe contestants in changing rooms, and all the other things–they don’t matter.

How on earth could they not matter, especially to the Moral Majority? The meme says because if he is elected, he’ll have the potential to accomplish conservative Christian goals (ie. nominate a pro-life Supreme Court justice who will finally eliminate abortion access once and for all in America). Jezebel (ie. Hillary) will not, so she is to be defeated at all costs.

Even though he has a multitude of sins and is blinded and bound by the media, Trump could stand next to the pillars of sin and finally do what he is called to do. That the allegations mostly come from people in the media and in Hollywood culture–which the Moral Majority categorically opposes as carnality–means the violations occured to people from another tribe anyway.

That’s the message, and it hinges on Samson’s “anointing” as the Trump Card (ha!) that covers over all his previous indiscretions, which Trump is also named as being anointed too (1, 2).

The Problem with Anointing

I asked my friend The Rev. Ric Shewell, a United Methodist pastor in Idaho (and guest contributor on this blog), what he thought of the anointing meme, and this is what he said:

By the way, “anointed” is never used for Samson, but it is used for Saul–the leader that the people cried out for despite God’s warnings. King Saul actually was anointed, and God took it back because he was acting like a fool (1 Samuel 15). There’s nothing “permanent” about being anointed in the Bible.

We see that Samson was not anointed at all, though Judges 13 indicates he was born to be special (or written that way in retrospect). His indiscretions and breaking of covenants were not necessary steps towards becoming used by God, but they were adapted to be used in that way.

And here’s the key: the decision to use Samson in that way was from God, not from humans. We did not know and only see it clearly in retrospect.

Only One Anointed One

Rev. Shewell concludes with this reminder:

After Israel’s string of bad kings and exile, they longed for an “Anointed One,” who would restore the kingdom like David. The sought after “Anointed One” would make all things right. “Anointed” in Hebrew is Messiah, and in Greek it’s Christ.

For Christians, Jesus of Nazareth is our “Anointed One.” He’s THE “Anointed One.” We made it his name. We call ourselves “Christians” for it. So to use “anointed” like spiritually blessed or chosen for a job is to take it away from Jesus. He is THE anointed one. Christians of various traditions tread dangerously with how they throw around that word.

Anointing is used to protect God’s Chosen People in the Old Testament, that is true. But as Christians, we follow only one Anointed One and cannot ascribe that to anyone else who we think may be blessed or chosen.

We cannot excuse the actions of the present because of the possibility of a political deus ex machina in the future. That sort of self-justification could excuse any sin, even voting for the Zodiac Killer because they might outlaw abortion. The ends do not justify the means, and the ends are God’s domain anyway.

We are called to vote for the candidate that matches our politics and values, without trying to explain away egregious violations as somehow “all part of God’s plan.” My hope is that as the election enters its final 30 days we Christians do better about explaining our values and really wrestling with the violations and violence instead of blaming God for all this mess. That’s not a faithful response that we are called to be.

Thoughts? Sorry for the political commentary, but it was too much of a meme for me to let go of.