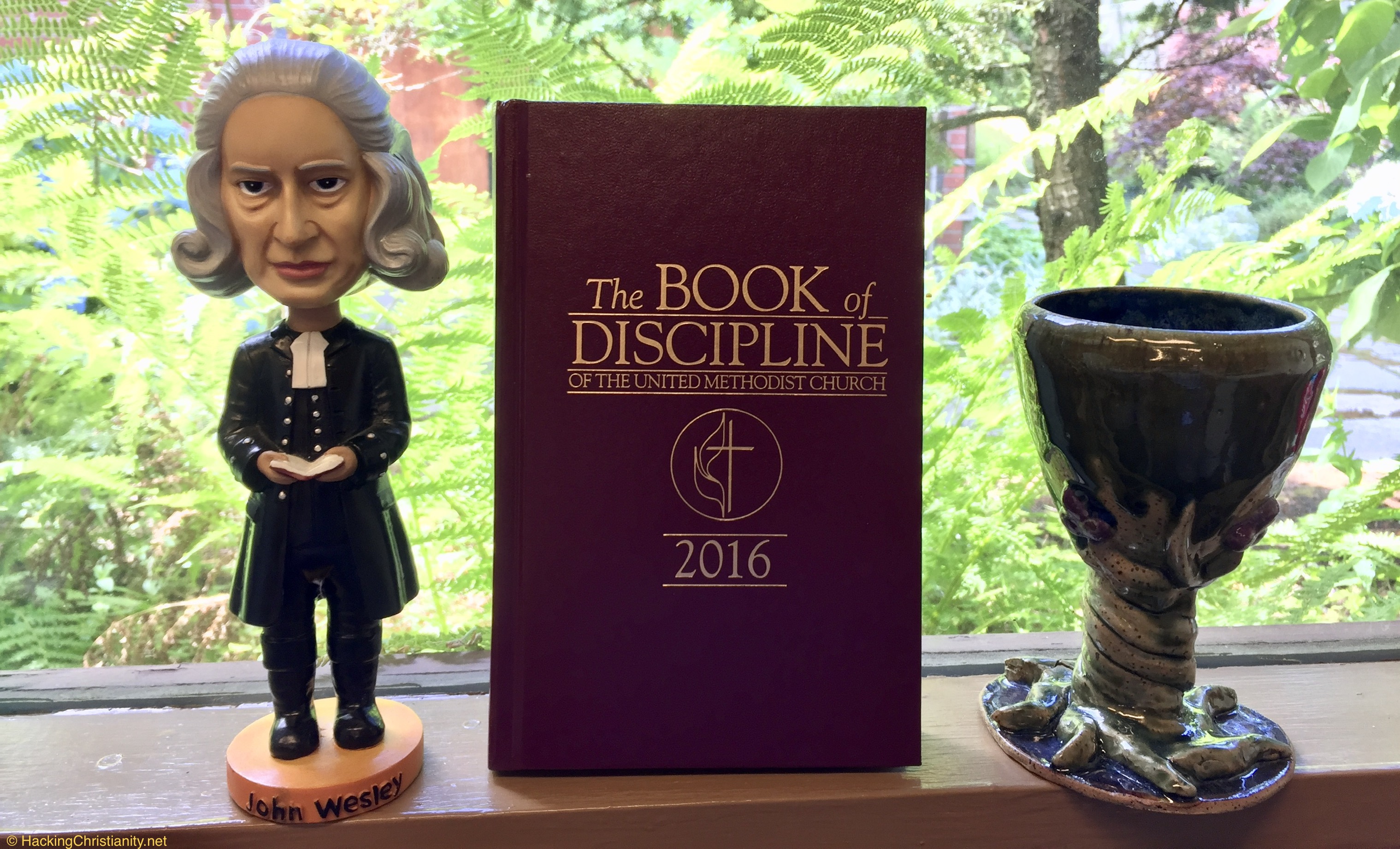 Since the deferral of the General Conference to 2024, there’s been an odd thing happening: churches that want to align with the Global Methodist Church have said they found a loophole paragraph (¶2548.2) that they claim would allow them to leave without paying the withdrawal fee. Indeed, there is an ecclesial-ambulance-chasing law firm whose $1000 legal advice to churches is…to use the loophole.

In May 2022, Hacking Christianity hosted an epic blog post disputing the use of this loophole in our polity (a “comity agreement”) to exit churches from the denomination without paying their fair share of withdrawal fees. The argument in the blog post was so well done it actually made its way to the top of United Methodism as the Judicial Council (our Supreme Court) heard arguments on the topic.

In August 2022, the Judicial Council released JC 1449, a decision on whether a ¶2548.2 comity agreement could be used as a loophole. In a word: Nope. But, since you are also a Methodist nerd and you like to go into the weeds with me, for more detailed commentary I reached out to the guest contributor who wrote the original epic blog post for his responses to four of my questions. Here they are.

Four Q&A’s on ¶2548.2 disaffiliation decision by the Judicial Council

1. What impact does Judicial Council decision 1449 have on current United Methodist churches seeking to use ¶2548.2 to disaffiliate?

The short answer is that Judicial Council Decision No. 1449 clearly and unequivocally  states that paragraph 2548.2 “may not be used as a pathway for local churches to  disaffiliate from The United Methodist Church.” The rationale for this is derived from the  understanding that 2548.2 outlines a process for dealing with property that is actually  quite limited, and can only be used in conjunction “with or after processes effectuating  fundamental changes in the membership and ministries of the local church, such as  interdenominational church mergers (2547) and ecumenical shared ministries  (207-209).”

This interpretation is consistent with my historical research and analysis of the Book of Discipline, as these are the contemporary iterations of the paragraphs that originally structured 2548.2 when its antecedent was introduced in 1948. While these paragraphs have been shifted to different sections of the Book of Discipline during the intervening time, the Judicial Council’s decision confirms that they remain connected and, consequently, 2548.2 cannot be used in isolation to effect the transfer of a local church out of the denomination. On the contrary, the paragraph can only function as a  supplement to other preexisting and concurrent ecumenical endeavors.

Interestingly,  the decision also includes a critical line of argumentation that states, citing prior Judicial  Council Decision No. 424, that “under a long-standing rule of statutory interpretation,  special legislation supersedes general legislation.” Counterfactually, even if paragraph  2548.2 had been a viable process for disaffiliation prior to the 2019 Special General  Conference, the procedures introduced through paragraph 2553 would still supersede the use of 2548.2 as “general legislation” in the present moment.

As I understand it, one of the implications of this is that the financial remediation many churches were seeking through the substitution of 2548.2 was a mirage, as the withdrawal terms established in paragraph 2553 would still have been obtained due to the supersession principle.

While JC 1449 takes 2548.2 of the Book of Discipline as its object, the complexity of the polity questions raised necessarily expanded the scope of the decision beyond a  simple interpretation of the paragraph alone. Two of the questions addressed by JC  1449 pertain to who, exactly, gets to decide which ecclesial bodies qualify as a  “denomination.”

Importantly, in JC 1449 the court affirmed that “the Constitution, not a statute, is the  source of General Conference’s full legislative power in matters of ecumenical  relations.” As such, while the Global Methodist Church may consider itself to be a  denomination, it cannot be treated as such by The United Methodist Church until an agreement is negotiated between the Council of Bishops and the, to be determined,  relevant leadership of the Global Methodist Church. Even then, such an agreement would not take effect or become actionable until it had been confirmed and ratified by  General Conference.

According to the decision, actions conducted by Annual  Conferences that attempt to circumvent this reserved power of the General Conference, including the use of 2548.2 for disaffiliation, are thus, “unconstitutional, null and void,  and of no legal force or effect.” It remains to be seen how the Ecumenical Office of the  Council of Bishops will proceed in negotiations with the Global Methodist Church.  However, I have the highest regard for Bishop Sally Dyck and trust that her office will proceed with exceptional integrity and wisdom.

3. Am I right to read that the only two paths forward for disaffiliation are ¶ 2553 or simple exit and renunciation of property? That no one can use ¶ 2548.2 at this time?

Yes, and no. To my mind, “disaffiliation” means something quite specific: a situation in which persons invested with trustee powers and responsibilities by, and on behalf of,  The United Methodist Church are permitted to make decisions about the disposition of church property despite the renunciation or suspension of their fiduciary responsibility to the denomination. To the best of my knowledge, prior to the introduction of paragraph 2553, no historical precedent for disaffiliation exists as I have defined it here.  As such, to be technical about it, there has only ever been one path for disaffiliation –  through paragraph 2553 – which will remain a viable option until December 31, 2023.

Simple “exit and renunciation of property” is available to effect the closure of a local church, as is the renunciation of membership and surrender of clergy credentials.  Membership in The United Methodist Church is, after all, voluntary.

In the event that local church property was abandoned in such a way, paragraph 2548.2 could feasibly be used to transfer the property to another denomination (a designation, per JC 1449,  which the Global Methodist Church does not currently hold). However, the critical distinction to make is that, contrary to disaffiliation as I have defined it, under a proper usage of 2548.2 those “trustees” involved in determining the disposition of the relevant property would not be persons actively seeking to leave the denomination.

I consider it reasonable to infer that the legislative intent in drafting 2548.2 assumed that those persons positioned to oversee the process – the Bishop, majority of District  Superintendents, and Board of Church Location – would faithfully uphold their fiduciary responsibility to The United Methodist Church and its professing members.

4. How closely did the decision match your analysis? What are you happy about and what are you troubled by, either a decision or lack of clarity?

I understand that there will be many who are disappointed with this decision, especially those who have devoted significant time and energy to drafting legislation and organizing toward the use of 2548.2 for disaffiliation. There was certainly enough confusion around the paragraph’s provenance, wording, and polity implications to merit interest. Indeed, the decision itself was contested, and Dennis L. Blackwell’s brief dissenting opinion adequately demonstrates the complexity of the issues involved.  Those entanglements are ultimately what led the Council of Bishops to unanimously approve the Petition for Declaratory Decision that resulted in Judicial Council Decision  No. 1449.

Nevertheless, I applaud the work of the Judicial Council and am pleased with their announcement. The decision is rigorously argued, faithfully attends to the diverse facets of the issue, and its key assertions appear congruent with the extensive research and analysis that I have conducted throughout the past year. I choose to believe that my deep dive into the massive tomes, journals, minutes, and Daily Christian Advocates was helpful to the Council of Bishops and Judicial Council even if legislative precedent did not feature prominently in the final decision!

Ultimately, what stands out to me is how both the Petition for Declaratory Decision and JC 1449 both ground their rationale on a concern for, and defense of, the Connectionalism that is the distinguishing feature of our denomination. This has certainly involved upholding the Trust Clause in this particular instance, but, more broadly, this decision clarifies and facilitates the uniform implementation of ecumenical relations across the denomination. In the immediate moment, this may undercut the hopes of individual churches who aspired to utilize  2548.2. However, it is my hope that, in the long run, this decision will aid The United Methodist Church and The Global Methodist Church in establishing respectful,  equitable, and mutually beneficial fraternal relations in the future for the benefit of all.

Lawrence E. Hillis is a Ph.D. student in Drew University’s Graduate Division of Religion specializing in the intersection of religion, politics, and economics. In addition to his work on political theology and violence against children, he maintains a concentration in Wesleyan-Methodist studies and conducts original research regarding Methodism and biopolitics. He has previously provided research and analysis to The United Methodist Church regarding Methodist involvement in Indigenous Boarding Schools and the history of Methodist schism(s). Hillis is a candidate for ordination in the Greater New Jersey Annual Conference and serves as an independent research consultant engaged by the General Agencies and the Council of Bishops.

So there you have it. The only way out for disgruntled churches that seek to exit people, property, and money from The United Methodist Church (at least more than they already are) is to pay the disaffiliation fees, which were supported by Traditionalist leadership at the 2019 General Conference.

The hits keep on coming for the WCA’s legal strategy to exit churches from the UMC. Maaaaaaaaaaybe, and I’m just spitballing here, churches should stop hiring law firms with bad advice, uphold the Discipline, and give accurate information to their congregations so they can make decisions within the United Methodist polity, not back channel around it.