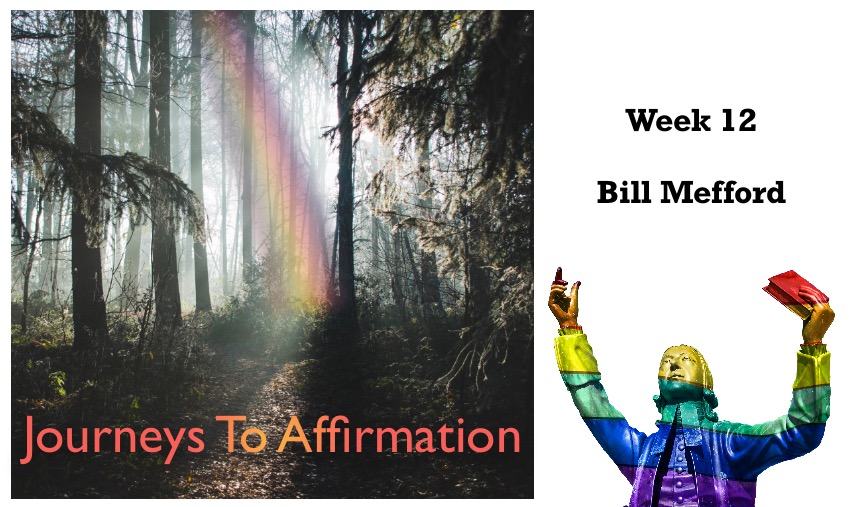 Alongside that effort, a group of former students/professors are now sharing their stories of how they have individually journeyed to the affirmation of LGBTQ+ people. For 12 weeks, each person will share their story as part of the project, Journeys to Affirmation.

These are their stories.

Back in 2008 I was working in Washington DC and one of the issues I was advocating for was the Matthew Shepard and James Byrd Jr. Hate Crimes Prevention Act, which provides funding and technical assistance to state, local, and tribal jurisdictions to help them more effectively investigate and prosecute hate crimes based on the actual or perceived race, color, religion, national origin, gender, sexual orientation, gender identity, or disability of the victim. It was ultimately passed and signed into law by President Obama in 2009 and I was so excited to see it pass.

It was during this time that I worked for an agency of the United Methodist Church based in Washington DC. My title was an impressive one: I was the Director of Civil and Human Rights. For a straight, white, cis-gender, southern, (former) evangelical male who had long been passionate about seeing God’s justice be manifest on earth, being the Director of Civil and Human Rights seemed to be a realization of what I was called to be and to do. I was both proud and deeply humbled to be in a situation and to work on issues like immigration reform, ending gun violence, ending mass incarceration, and LGBTQ equality.

So, in 2008, during the work for the passage of the Hate Crimes Act, I was in a coalition meeting at the offices of Human Rights Watch when I looked around the room and realized I was the only hetero person in the room. For whatever reason, I suddenly started having a panic attack. Thankfully, it was not evident to others what was happening, so I quickly left the office once the meeting was over and went to a small park near their office and sat on a bench and tried to calm down. Being in a room where I was the only hetero person was not new to me so I could not understand what was happening, but as I reflected, it dawned on me that my panic likely stemmed from my own past participation and silent acquiescence from homophobia and violence done to members of the LGBTQ community. This is the stuff I never shared with anyone. How could I? I was the Director of Civil and Human Rights! So, in shame, I sat there and cried. The deep shame I felt came from my past actions – and inaction – and from the dissonance of realizing that even though I had the title of Director of Civil and Human Rights I was still mired in the sin of homophobia. I was a fraud.

Homophobia and gender-based violence does not care about our titles or reputations. It does not keep tally of how many rainbows I plaster on my Facebook photos or how many PRIDE parades I attend. It doesn’t give a whit if we are part of a Reconciling congregation or wear rainbow stoles. Homophobia is sin on both an individual and societal level and like racism, no matter who you are or where you reside in the United States, no matter your place in life, or how many times you go to church (and in fact, the more you go the more you are impacted if you are United Methodist), everyone has been touched by this sin. For me, I have more than touched by it; I have waded in it, swallowed it, been drenched by it. I have done tremendous harm to others through my past actions – and inactions – and attitudes and speech.

Yes, I have told homophobic jokes, but admitting to that is barely scratching the surface. I have taught Bible studies and preached sermons that have done violence to my LGBTQ siblings. I have counseled youth and college students who were “struggling” with their sexuality and gender identity and I have done violence to them and their growth in Christ by trying to force them into hetero norms. I have attended so many classes in seminary where violence was done through distorted teachings and sermons and I never openly challenged this harm. I have been an overt practitioner and a complicit actor in discrimination and violence.

Even as I write this the shame digs deep into my stomach; my heart literally aches. The tears come again. The shame is real and it should be. I have done violence to my LGBTQ siblings and I am sick because of it. I am Saul who held the coats of those who persecuted Christians for I did this for my seminary colleagues and teachers. And I also was one of those doing the persecution who gave my coat to Saul to hold. I have done violence to my LGBTQ siblings. I have sinned and sinned deeply and my sin has caused deep hurt and harm and I am wrecked by it. It hurts.

So, while I was a student at Asbury I began to realize that the discrimination and violence directed at LGBTQ people was a complete distortion of the gospel of Jesus. But this realization came slow. I was a moderate, but being a moderate in the land of bigotry can make you feel pretty proud. So, as this truth dawned on me I did what all southern, white, (former) evangelical males do when we feel bad about something – I tried to fix it!

When George W. Bush used hatred of gay people as a way to get reelected in 2004, I joined the state  campaign to organize against this effort. Being the only person from the county where Asbury Seminary is located on the organizing team, I made sure to wear my Asbury Seminary sweatshirt to every event, especially when it was to be photographed or news cameras were to be there. And I organized listening sessions between Asbury students and gay Christians so that there could be greater understanding and compassion.

I also repeatedly raised the issue of marriage equality in my yearly accountability group, made up primarily of other Asbury seminary grads. I have been defriended on social media by a lot of former seminary friends because I pushed justice issues – including marriage equality – too hard and because I was too passionate. And I pushed too hard for an overt campaign to change the Book of Discipline at my former workplace.

Yes, to make up for being a hate-filled bigot to LGBTQ people I became an asshole to evangelicals.

Yeah, I have done a lot of things, organized a lot of events, raised a lot of hell and while most of that is pretty cool (I suppose to some people), and all of it served to give some polish to my street creds as a fully-fledged liberal activist, absolutely none of that eased the ache I carried in my gut. Frantic activity is not repentance. None of it gave me peace from the memories of harm I have caused. And none of this has erased the deep shame and guilt I feel for all that I have done. Being liberal just ain’t the same as being free.

I guess these last few years I have decided I don’t care anymore if I am regarded as a prophet or a liberal or an asshole. It helps a helluva lot now that I am no longer held captive to the title of Director of Civil and Human Rights. That was just an institutional disguise anyways. Institutionalism is to the left what nationalism is to the right: golden calves which grant social and personal identity and value. But this false sense of security is idolatry for it robs the soul of vulnerability. And it is through vulnerability that we are honest, that we are pierced by the truth of the Spirit, and that we are made whole. I am free now of so much and institutionalism is no less a former means of captivity than is my homophobia. I thank God for God’s grace in all things and in all means.

I find peace now and I sense God’s forgiveness now in a lot of ways and one of those is when I hang out with my LGBTQ siblings and I’m just present. I just listen. I listen A LOT. I don’t lead, I don’t try and be a liberal hot shot, I just am. In fact, I think I am done being a liberal. Too much damn work. I sure as hell am not evangelical anymore – too much damn harm. I just try not to suck at following Jesus.

Part of not sucking at following Jesus starts with recognizing the loads of privilege in my life. I am a southern, white, cis-gender, straight, (former) evangelical, (former) liberal, Christian male and the grace of God is that even with this I am called to mission. Jesus is my Savior and honestly, that is awesome.

Bringing all of these together is God’s love and it is God’s love that lights my way. It is God’s love that has lit the way for my eleven siblings who shared their stories in this series, Journeys to Affirmation. Their willingness to be vulnerable, no matter the pushback from powerful forces that would prefer we remain silent has been transformative to me and I hope for you as well. Through their stories I have seen and heard about some good that many of us have received through our experiences at Asbury Seminary, but much harm was done as well. The prayers of many alumni and current students for Asbury Seminary to repent of the harm that has been caused will continue. I hope those prayers will be answered soon.

It is God’s love and only God’s love that leads us. I feel that deep in my bones. May we all continue to journey towards affirmation and liberation. May we receive and live in God’s love anew; a love for all people. No exceptions.

Bill Mefford is the Supreme Commander of Love at Fig Tree Revolution and he received his Masters of Divinity in 1998 and his Doctor of Missiology in 2008, both from Asbury Theological Seminary.

About this series: Journeys to Affirmation is a group of people affiliated with Asbury Theological Seminary who are sharing their stories of how God’s grace moved them from non-affirming to affirming of LGBTQ+ people. Click here for all entries in the series.

Thank you to these Asbury Theological Seminary students, alums, and staff who share their stories. And special thanks to the curator Bill Mefford @ Fig Tree Revolution for his guiding, editing, and leading of this project.