Home/United Methodist Church/Journeys to Affirmation 11: A Wide and Loving Embrace 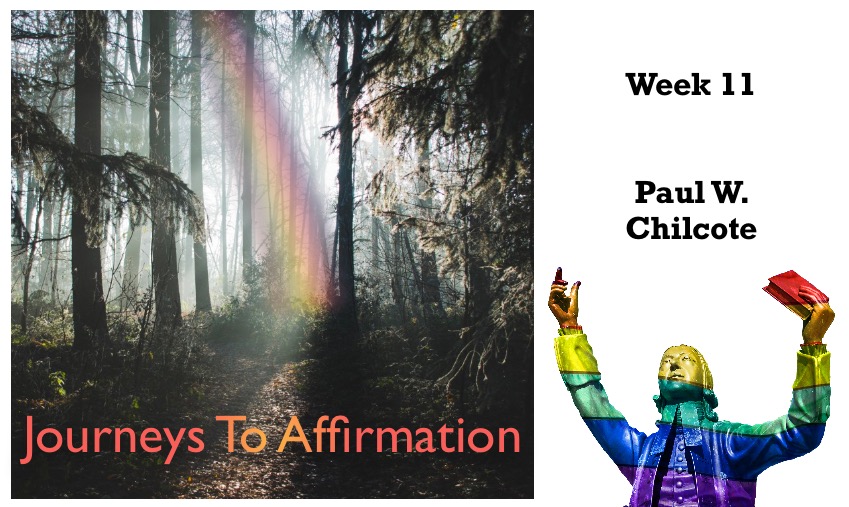 A Wide and Loving Embrace

All of us experience conversion on multiple levels. Sometimes change comes as a consequence of cataclysmic events; in other circumstances, we experience transformation in the context of a lengthy process. For me, my movement in the direction of affirmation reflects the latter processive experience. To put this metamorphosis into words has not been easy for me. But I cannot conceive the changes I have experienced as detached in any way from my foundational vision of the Christian life, the important head and heart work in which I have engaged, and the personal relationships that define my life.

If you cut me, I bleed Methodism. In my home we learned two languages, English and Methodese. I speak both rather fluently. I am a third generation ordained Elder, with numerous kin who have been or are currently pastors in the United Methodist Church. My father, who was 50 when I was born, was schooled in the great Boston Personalist tradition in the first quarter of the 20th century. Personalism was the particular form that classical liberalism took in the American Methodist heritage. Its influence was pervasive prior to World War II, and it produced  theological giants like Georgia Harkness and Martin Luther King, Jr.

Dad began his ministry at the height of the fundamentalist/modernist controversy and he never relinquished his deep antipathy towards fundamentalism – a worldview that simply claims to know the truth above any other claims. I inherited this sentiment. My father’s favorite poem was the poignant quatrain of Edwin Markham, what I have always considered to be a lyrical summation of that classical liberal perspective with its focus on grace and love:

By the time I was a teenager, I had heard it so many times I had unconsciously memorized it.

My middle name is Wesley. Ironically, I didn’t really discover what it meant to be Wesleyan until I studied theology at a major Lutheran university. My own research at that time led me to fall in love with the theology of the Wesleys. John Wesley proclaimed a way of salvation – a theology of grace upon grace – that won my heart. And Charles Wesley, oh my goodness, sang this “love divine, all love’s excelling” into reality for me. The Wesleyanism I came to love was generous and open, forward-moving, even elegant. Its goal was the fullest possible love of God and the fullest possible love of others. Combined with my father’s Personalism, this Wesleyanism shaped me, I pray, into a follower of Jesus with a wide embrace.

It must have been around 1972, the year I graduated from high school, and at which time language concerning “homosexuality” first appeared in The Discipline, that I first gave attention to any of these concerns at all. As a good child of the church, I simply accepted the prohibitive perspective codified there, never even raising a question. I only began to struggle with the church’s position on human sexuality decades later, but without any critical shift in my “welcoming but not affirming” perspective.

In the early 2000s I was invited to participate in several major interchurch dialogues. While serving on the ELCA/UMC bilateral dialogue, our Lutheran friends were coming to grips with regard to sexuality in their own tradition. For me, while these were, in some way, only intellectual debates, the ongoing conversation brought these concerns closer to home. Then I met a dear South African on our team in another international dialogue who identified “Queer.” I hate to say it now, but this was the first person I ever engaged with in real conversation around the issues of sexuality who was different from me. My conclusion was absolutely clear: how could anyone exclude this gifted, loving human being from their embrace? While I had given lip service to dealing with the issue of sexuality on a personal level – as opposed to tackling it on the theoretical level of an “ism” – I confess that this was the first time I actually practiced what I had preached.

Through all this there was still a dissonance in my heart and mind that I found difficult to resolve. To overly simplify my internal dilemma, it seemed as though my mind could not quite catch up to my heart. Three critical developments brought all this to a head for me in 2019.

First, I had spent the vast majority of my career attempting to rescue those who had been “lost” in Methodist history. I made the effort, for example, to get Charles Wesley out from under the shadow of older brother, John. Likewise, having come to the conclusion that women played a much more significant role in the church than had ever been recognized, I turned my attention to this arena of neglect over the course of three decades in studies from She Offered Them Christ in 1993 to The Methodist Defense of Women in Ministry in 2017. This last book included the biblical arguments for the ministry of women and it begged the question, in my mind, what about LGBTQ+ kin? I could not answer that question because I had never seriously studied the relevant biblical material. Over the course of the ensuing year (2018), I came to the conclusion that the arguments were parallel and persuasive. You can read about my conclusions in the first chapter of my book, Active Faith, written in Fall 2019.

During this same period, secondly, I became increasingly alarmed by what I would describe as a resurgence of fundamentalism in the church. Signs within my own United Methodist Church particularly disturbed me. A closed “society of saints” view of the church with a legalistic understanding of holiness seemed to prevail over the open embrace and inclusive character of the Wesleyan tradition I loved. The ugliness and punitive nature of this vision surfaced particularly at the Special General Conference in February 2019. Groups laying claim to Wesleyan holiness, in my view, had distorted an authentic holiness oriented toward love for a legal view of righteousness which revolved around the law. Active Faith reflect on some of these developments as well. My response to all these developments was quite simply, this is not right. You cannot do harm to beloved siblings in Christ in this way. Something is fundamentally wrong.

I come finally to what is the most difficult dimension of my journey to affirmation, the story of my beloved daughter, Rebekah. I have intentionally spent a lot of time above talking about my intellectual journey to an inclusive vision because I do not want my narrative to be misread in the direction of “his daughter is a lesbian, so he had to change his mind.” While nothing is more compelling than this most personal and intimate aspect of my journey, it cannot be divorced from the other substantive dimensions of my “conversion.” Rebekah “came out” to my wife, Janet, years before I ever knew she had any questions about her sexual orientation. In 2011, having fallen in love, she resolved to tell me about her circumstances. Sitting in the warmth of our fireplace, she told me that all she wanted was a chance like her sisters had to bring someone home and have them be accepted. I choked through tears to tell her that nothing she could ever do would make me love her any less. I said that love could never be wrong and if she loved someone and that person loved her – that they would always be welcome in our home!

It would be wonderful to be able to say that, as a consequence of that sacred moment of intimacy and honesty, all my internal dissonance resolved. But it didn’t. Despite my honest reassurances to Rebekah, that tension remained for some years in both my heart and mind, only to find fuller resolution over the course of 2019.

As a progressive Wesleyan, my journey has led me to embrace a fully inclusive vision of the church – that beloved community in which all are welcomed, affirmed, and loved. As I say directly to my LGBTQ+ siblings in my book on Active Faith: “1) You are beloved of God; love is your reason for being. 2) Your loving relationships can be expressed in sacredness, fidelity, permanency, and monogamy. 3) As beloved children of God you are invited to use your gifts to the fullest possible extent in the embodiment of God’s vision of shalom” (14-15).

The “Progressive Wesleyan Declaration” in Active Faith, which encapsulates my inclusive vision, concludes with these words:

We find Love in Jesus.

He demonstrated the fullest possible extent of the love of God and neighbor.

Like him, we seek to live a life of faith working by love leading to holiness.

We pray that our practice of holiness helps to inspire others to discover their true identity as the beloved children of God.

We embrace the holistic and all-inclusive vision of God’s restoration of beloved community.

Dr. Paul W. Chilcote, an award-winning author and retired theologian, has taught on three continents in a wide spectrum of theological institutions including Ashland, Duke, MTSO, and Africa University. Author of nearly thirty books, two of his most recent publications address issues of inclusion, Active Faith and Living Hope: An Inclusive Vision of the Future (with Steve Harper). Dr. Chilcote helped launch the Florida Dunnam Campus of Asbury Theological Seminary from 1999-2005 and then returned in 2017 to serve prior to his retirement in 2019.