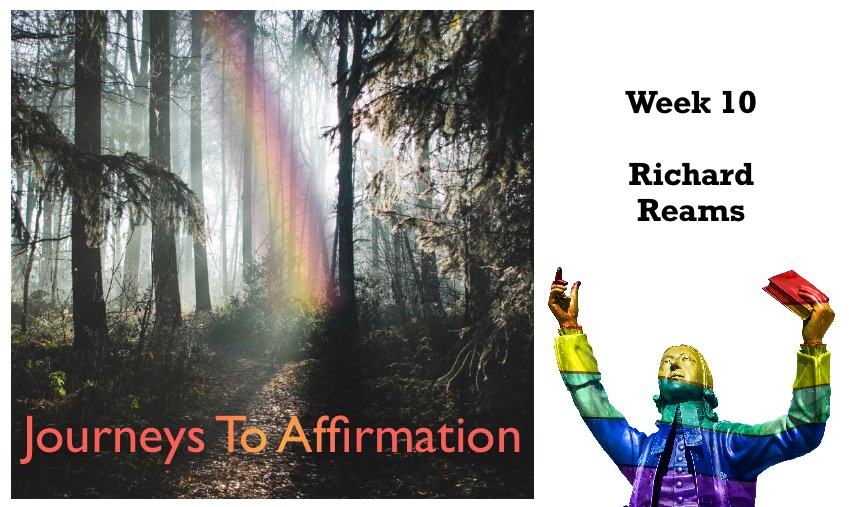 As I sit down to write this, I’m overwhelmed with conflicting emotions.  On the one hand, I feel a great privilege to tell my story; on the other hand, I feel woefully under-qualified, ill-equipped, and late to the conversation. Nonetheless, welcome to my journey from non-affirming to affirming as an ordained elder in the United Methodist Church.

I have been a United Methodist since I can remember. I was baptized, confirmed, and called to ministry at various UM churches in Macon, GA.  College took me to South Carolina where I joined the staff of a local UM as a youth minister, moved my membership from the South Georgia to South Carolina and official embarked on the candidacy process from there.

I’m sure there were people in my life that identified as LGBTQIA, but I would not have been someone they confided in.  I fully believed in “love the sinner, hate the sin” and welcoming as I might have believed myself to be, hindsight is always 20/20, and it is no surprise that I didn’t know any LGBTQIA people growing up.

Well, I should clarify…I have no doubt I did know some, they just knew I was not an ally, so I was not aware of that piece of their identity.  For that reality and many moments in this story, I will always feel the need to repent.

My journey from non-affirming to affirming began during seminary.  I loved my time there!  I took every language class I could so that I could fall more in love with Scripture and the God revealed through those written words!  My time in seminary formed me into who I am, gave me the tools to grow in my theology and practice of perfect the love of God and neighbor. Ironically, it gave me the tools to move from non-affirming to affirming.

Looking back I can identify 7 moments from the last 12 years that have transformed my story – also those numbers seem exceptionally fitting for a conversation such as this, but I digress.

“Would you baptize the child of a same-sex couple?”  That was the question posed to me by a mentor.  To be honest, I had to think about it.  This is one of those moments I referred to earlier.  After a couple of days I decided that I would baptize the child. The power and grace in baptism stems from God, not the parents, so I devised I would baptize this hypothetical child as long as there was a sponsor that could also answer the questions since the parents were obviously living outside of God’s will.  This was painful to write for the world to see, but this is my story and the first step in my transformation.

Fast forward a few years and I’m the senior pastor of a local church at a mission camp with our youth group.  One night during worship, there’s a panel of pastor’s for some Q & A’s with the youth.  It was going well until 2 questions came up:  is homosexuality a sin & is suicide unforgivable? The senior pastor of the church took the mic and chose to answer both of those questions.  In short, yes and yes were his answers. It churned my stomach then (though I was still conflicted internally) and I can’t put into words the emotions is brings up now.  May God forgive the adults who were silent in that moment. And I thank God for the volunteers who followed the few youth who walked out of that fellowship hall crying so that they might begin to repair the damage.

In that moment I realized I wasn’t affirming…but God save me, I would not be non-affirming anymore.  I began to say I don’t know, but I know God’s love has no conditions.  I began to understand that all might actually mean all, but I’m getting ahead of myself.

A couple of years later, at a local coffee shop in small town South Carolina, a young man came out to me.  This was the first for me as a person and pastor.  He had been worshipping with us for some time.  His father was a pastor but had all but disowned his because of his identity.  He began to tell me of his faith and how he’d found a home at our church.  He described beautifully the power of assurance and faith in Jesus.  Then he asked me, “Will you baptize me?  I’m gay and will be gay.  It’s who I am.  But I’ve never been baptized and I feel like that’s my next step for my faith journey.  Will you baptize me?”  I’d studied and translated Acts 8 countless times, but now I had a decision to make…I realized I had no idea what it meant to be anything other than a straight, southern, white, male.  And everything about this young man’s life connected to what I’ve dedicated my life to – making disciples of Jesus Christ for the transformation of the world – except my opinion about his identity.  I said, “I don’t know what its like to be in your shoes.  I can’t say I affirm it yet because I’m wrestling with my own preconceived prejudice.  But it would be my awesome privilege to baptize you.”

To this day that is the most memorable baptism I have been fortunate enough to partake in.  That moment was also a tipping point.  No longer was I against some type of theoretical statistic or “it,” I’d been privileged to build a relationship with someone who was different than me – and I am forever grateful for his courage.  His courage to ask me that forever changed the way I approached ministry.

The floodgates also opened.  The more open I became, the more I began to connect with people who identify as LGBTQIA.  Naive…sure…obvious…absolutely.  All I can say is the more I opened my eyes, the more light that began to shine deep into my soul (ps…it’s almost as if Jesus said something about that too!)

A dear friend who is incredibly talented and gifted for ministry came out to my wife and I.  No one can argue his gifts or talents or ministerial fruit he’s produced.  No one can argue his intellect or calling.  No longer could I be silent about his “worthiness” in the eyes of my beloved denomination.  I became quietly affirming to him and others, but didn’t yet have the courage to speak out loud.  That too would change.

Youth from the past began to reach out to me and my wife and come out to us.  We had played such a role in their formative years, they felt compelled to reach out as young adults.  We had beautiful conversations with young people who told us how freeing it was to have a pastor and mentor who would simply affirm their worth as children of God.  And while it was humbling to play that role, it hurt that wherever they were worshipping at that moment didn’t play that role for them.  Perhaps it was time for me to stop being quietly affirming person to person and “take thou authority” to actually preach the good news of the Gospel to all!

I’m running low on space so let me wrap up.  Twice I have been asked to officiate weddings, once by friends and once by church members.  I told them both I was willing but they needed to realize the publicity that would bring to their marriage and life.  It stung a little for our friends to have another minister perform their wedding, but they were connected with another church and the pastor did a fantastic job.  We were able to celebrate as friends.

Not officiating the wedding of church members was an entirely different story. No longer could I afford to sit on the sidelines and speak words of affirmation quietly. It was time, albeit long past time, to embrace the moments and privilege I have to speak out.  So here I am and I can do no other.

I have not abandoned my theological teachings; I have embraced them.  I have not abandoned my love of Scripture; Scripture continues to transform the way I view God and the world around me.  I have not abandoned God.  If anything, I am striving more everyday to follow the God who turned over every table and barrier that religion had erected.  I am striving to follow the God who took Phillip to the wilderness road and gave Peter an entirely new understanding of cleanliness.  I’m thankful for those that played a part in my journey.  I would not be who am I today without your love and influence. You are beautifully and wonderfully made and I am forever grateful to be on this journey with you.

My name is Richard Reams and I serve as an elder in the United Methodist Church.  I’m married to the most excellent person God ever created and am thankful everyday for your influence in my life. Without you and your consistent challenging, this journey would not be what it is.  I attended Asbury Theological Seminary from 2007 – 2010 and graduated with a Master of Divinity.