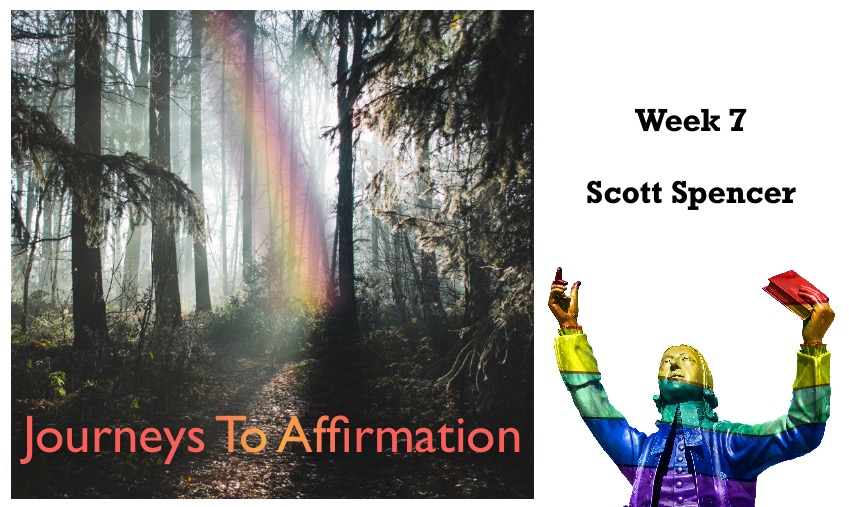 My earliest memories include the church. I remember being at the church while my mom was in choir practice. I remember the offering plates being passed during worship and sitting next to my dad while my mom sang in the choir. I have pictures of nativity plays in the sanctuary and visits by Santa Claus in the fellowship hall. Around third grade, my family moved to a larger United Methodist Church. And as I grew older, I could not wait until I was in 7th grade and could be a part of the youth group. God, faith, and church were a part of me from the moment I entered this world.

My parents did not have me baptized as an infant. I was baptized when I was around 12 years old during the confirmation ritual. I don’t remember much about the confirmation class, but I knew I wanted to officially be a member of the church, that I loved God, and that I wanted to follow Jesus. I also remember the confirmation material – it had zero pictures in it and on the back page (which was blank) the pastor had us write “grace = undeserved forgiveness.”

Throughout junior high and high school, I remained active in the church. The topic of homosexuality was not something I remember being discussed either in my family or in the church. One of my earliest memories of being aware of what it meant to be gay was watching the t.v. program “Three’s Company.” And of course towards the end of grade school and the beginning of junior high, derogatory terms were thrown around in the hallways in a typical bullying fashion. Rock Hudson died of AIDS during my high school years and of course, the rumors were “he was gay.”

When I chose a seminary, I chose Asbury based on its reputation as being deeply grounded in “classical Wesleyan-Arminian theology” which I had come to believe was the best expression of Christianity. It was no secret during my time at Asbury that there were students who “struggled with same-sex attraction.” Some were quite open about it. Others, more quiet.

I took a class on pastoral care and counseling while at Asbury. It was also during that time the UMC had its General Conference in Louisville. It was 1992 – and the study committee on homosexuality (which had met for the previous four years) was presenting at General Conference. My professor was on that committee and led the charge for the traditional view. He spoke clearly from the podium in Louisville and said that the reconciling Methodists had added “bisexual” to the usual phrase of “gays and lesbians.” He indicated that bisexuals, being attracted to both males and females, opened the door to non-monogamous relationships. At the time, we traditionalist students nodded our heads in agreement. I have since learned how wrong one’s assumptions can be. My professor simply did not understand what it meant to be bisexual. If a straight man can marry a straight woman and still find other women attractive but remain in a monogamous relationship with his partner, a bisexual person can also be in a monogamous relationship regardless of the feelings of attractiveness to others which may occur.

Nor did my professor understand much about sexual relations between two men or two women. In his class, he explained that human beings are the only species to have face-to-face contact during sexual intercourse. It is the most intimate kind of contact between two persons. But homosexuals, he said, don’t have face-to-face contact while engaging in sex. It was one more reason why homosexuality was wrong.

I was stunned. How could a professor be wrong?

There have always been these cracks in my understanding of homosexuality. New information emerges. New experiences. New realities. My worldview was changing and continues to change.

Around 2014, my bishop had been quoted in our state newspaper. Twice. Both times the bishop alluded to the fact that “Methodists follow the Bible” without clearly stating the United Methodist position on homosexuality or clearly stating that United Methodists can (and do) disagree with one another. Also, around that time, Rev. Frank Schaefer lost his clergy credentials simply for officiating at the wedding of his son to another man his son loved. It was time for me to speak up. While my bishop was being quoted in the paper, and while Rev. Schaefer was put on trial, marriage equality was coming to Oklahoma (even before the Supreme Court ruling.) I, along with several other United Methodist clergy in Oklahoma, began to publicly speak up. We placed ads in the Daily Oklahoman and the Tulsa World, we created a Facebook page and website, we ordered t-shirts, we marched in the Tulsa and Oklahoma City Pride parades, and we invited Rev. Schaefer to come and speak in Oklahoma the same week as our Annual Conference session met. Over 200 people met to hear Schaefer’s story.

In a former church I served, a gay couple wanted to get married. They knew they wouldn’t be able to be married in the United Methodist Church. They didn’t want to put me in an awkward position by asking me to officiate. They were married by a friend in a local venue often used for weddings. Many from the church attended and supported this couple. Some did not. This couple had been together for over two decades. They had raised a nephew as their own son. The church had been there for them – time and time again. The couple had experienced all the ups and downs of life together as any other married couple had done. When they could legally be married – with all the benefits that come from a marriage recognized by the state – they wanted that for themselves. It was inconceivable to me that their life together was wrong, shameful, or sinful. I attended the ceremony – as their pastor and as a friend. I offered a prayer during the ceremony. They said, “We won’t mention the church or that you are our pastor.” When I stepped forward, I proudly told the gathering that I was their pastor. There was no reason to be ashamed. After all these years, these two men are still married.

The United Methodist Church has been harming our LGBTQ+ siblings for at least 47 years. It’s time for the harm to stop. And I will do my part, with God’s help, to bring reconciliation and liberation to God’s LGBTQ+ children.

Rev. Scott Spencer is a 1995 graduate of Asbury Theological Seminary and has served in the Oklahoma Annual Conference as an associate, a pastor, and a campus minister. He is currently the lead pastor of Mosaic United Methodist Church in OKC, a reconciling congregation.