Home/United Methodist Church/Journeys To Affirmation 06: The Truth Will Set You Free 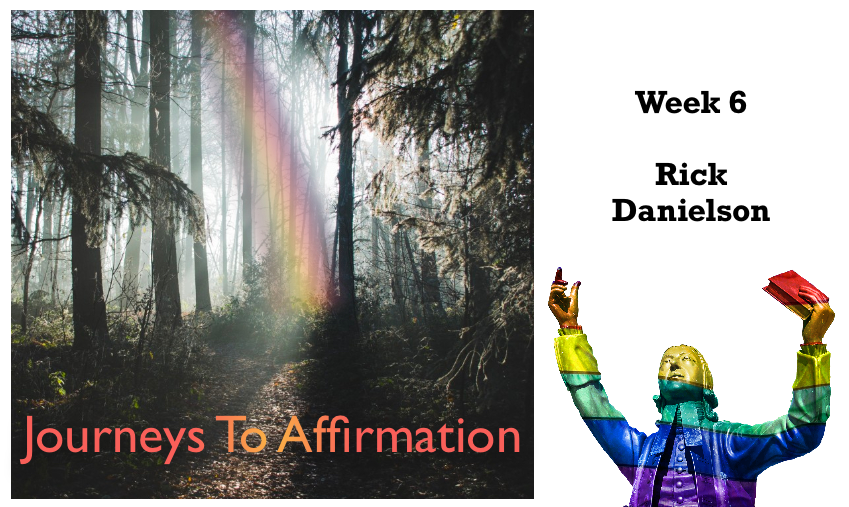 The Truth Will Set You Free

The afternoon light filtered through a church office window in Wilmore, Kentucky. Two figures hovered over me. A seminary professor addressed the evil spirits:

“Tell us your name!”

I opened my mouth, hoping the right word would slip out. Nothing. “Homosexuality?” I suggested, hoping the obvious was correct. It wasn’t.

Then again, with authority: “What is your name?!!” Still nothing.

The pastor helping with the ritual was sent to collect water in an empty soda can.

Sweat formed on my brow as the session continued. My breath became shallow and rapid, and my fingers and hands began to tingle and feel numb. I reported the sensation and received this reply:

“It’s because of what you’ve done with your hands.”

The tingling, the professor explained, was a spiritual manifestation of my sin. Everything was suddenly very “real’, and it terrified me. Water was sprayed at my head, and instantly a loud, anguished sound escaped me. I sobbed for a few minutes as tears dripped down my face. A break-through. Finally, something was happening. Perhaps the demons had come out. I began to breathe easier, and the tingling in my hands diminished.

Walking home, I felt confused and conflicted. Was the deliverance real? In retrospect, it just felt contrived and exhausting. The now-obvious onset of hyperventilation didn’t help. I noticed a handsome college student cross the street ahead of me. Why wouldn’t God deliver me? Wasn’t I trying hard enough? Or not really surrendering? The exorcism was voluntary and a last resort. How else could I show God my desire to be delivered? For decades I had begged God to make me “normal.” I participated in numerous sessions of “inner healing prayer” at Asbury during my earlier M.Div. years. Before Asbury, a Christian college counselor referred me to a reparative (aka conversion) therapist. He and several other counselors over a span of seventeen years reinforced that I had never properly bonded with my father as a child. My attraction to men was therefore a sexualized attempt to “repair” the relationship with my dad. It seemed to make sense, though my dad and I had a pretty normal relationship before the therapy started. It definitely went downhill from there.

From the age of fifteen, all I wanted to be was a United Methodist pastor. My teenage life centered around church activities, and I dedicated and re-dedicated my life to Christ many times. I was prayed over to receive the Spirit’s baptism and coached to speak in tongues by a team of evangelists staying in my family’s home. I was the Jesus freak at school who carried his Bible from class to class. Simultaneously, I felt a deep, silent shame because the strong urges I felt for boys rather than girls. I was sure I’d grow out of it or that I could overcome the desires by disciplined prayer and my devotion to Jesus. Certainly, God would finally have mercy and “heal” me. Instead, after years of struggle I began to engage in secret and reckless behavior that deepened the shame and despair. Further years of counseling and prayer and accountability partners, followed by periods of “victory,” convinced me that marrying a woman would be a sign of healing and an act of faith. I did marry a remarkable woman after a brief courtship and engagement. Family life, including two children, was deeply satisfying but did nothing to diminish my attraction to men.

After my Beeson D.Min. year in residence at Asbury and the soda-can deliverance session, I returned to active ministry. My life seemed pretty perfect. I had a beautiful family, an energetic and growing United Methodist Church in a college town, and soon a Doctor of Ministry degree. Despite my ongoing struggle, I was still certain God would change me if I kept my focus on Jesus and my spiritual accountability systems in order. Persistent faith or massive denial? On the day after my fortieth birthday, I met a local university professor, and the physical and emotional attraction was immediate. For one week we engaged in an affair. He was Jewish and agnostic and gay, and he challenged me, the married Christian pastor, to be honest about my sexuality.

I wasn’t ready to reconsider my beliefs. I did, however, embrace the idea of being more honest. The affair stopped and I told my wife and district superintendent what had happened. I requested a leave of absence from ministry so I could repent more deeply and make things right with my family and God. The district superintendent believed I was on the right track already but reluctantly agreed to make the arrangements. The confession seemed like a good start, and I felt hopeful. I wasn’t prepared, though, for the sudden end of my UMC vocation a few days later. I was called into the bishop’s office for a brief meeting in which I was directed to verbally declare that I was a “self-professed, practicing homosexual.” I refused. Why would I do that when I still desired, with God’s help, to be heterosexual? In light of my refusal, the options given for my future in the UMC were bleak. As the meeting concluded, I agreed to surrender my ordination credentials. I never returned to the pulpit. It was publicly announced, at the direction of the bishop, that I had resigned due to “serious sexual issues.” As awful as those words were, it seemed better at the time than the alternative of being branded as gay.

The months that followed were filled with the anxiety of unemployment, a renewed commitment to reparative therapy, and an eventual realization that decades of trying to live a heterosexual life had taken me to a very dark place. Eventually, I made a decision to suspend my long-held assumptions for several months. During that time, I engaged in serious study of theology, Scripture, psychology, sociology, and history as they relate to homosexuality. I prayed and journaled and then submitted to an assessment by a bona fide psychiatrist (not another “Christian counselor”) to determine whether I was gay or bisexual or had any hope of being straight. Little by little, I came to accept my orientation as a gay man. I saw and acknowledged the damage that trying, and failing, to be something else had done to myself and to those I loved the most. I could no longer believe that being gay is a sin, let alone evidence of demons. My marriage ended. A life outside the closet and the UMC began. In the light of day, shame and compulsion dissipated. Eventually I met the man who has shared my life for the past fifteen years. Three years after leaving UMC ministry, I joined the United Church of Christ and served as pastor of congregations in New York and Colorado until retiring in 2017.

I’m grateful today to be an advocate for LGBTQ persons in the church. I’m always amazed at the tenacity of those who have been on the receiving end of rejection and ridicule. It’s inspiring to hear the stories of those whose love for God is greater than their fear of being told, again and again, that they are sinful and broken because of their sexual orientation, gender identity, or who they love. I’m also grateful for straight allies who risk their reputations to stand up for LGBTQ persons, often at great personal cost. My dad, who passed away last year at age 95, was active in the Good News movement from its earliest days. After I came out, he began his own journey through Scripture and theology to become an ally. He wore his Reconciling Ministries Network pin to his UMC every Sunday and sadly lost close friends who could not accept his change of beliefs.

I try to understand why people remain entrenched in opposition to LGBTQ equality in the church. Certainly, it is true that sincere commitment to understanding Scripture can lead persons to different conclusions. It’s also true, I believe, that the cost of re-thinking and actually changing “traditional” beliefs about human sexuality is just too high for many. Vocations and reputations and friendships are at stake and I believe are more influential in shaping and cementing belief than most imagine. If I had not had to confront my own orientation and make long-term, sustainable decisions, I’m not sure I would have changed my own mind about LGBTQ persons. I would like to hope so, but I don’t really know.

One of the greatest joys I have is assuring people that they are perfectly made and worthy of giving and receiving love regardless of what others have told them. I’ve volunteered with advocacy groups and preached sermons, but mostly it happens one-on-one and in serendipitous ways. I continue to appreciate the foundation of faith and formal education I was blessed with, and I am grateful for God’s persistent grace that convinced me that I did not need to “change” in order to be whole and beloved.

Rev. Dr. Rick Danielson is a graduate of Asbury Theological Seminary (M.Div. ’86, D.Min. ’01). He served as a pastor in the UMC and the UCC, retiring in 2017. He and his husband, Leroy Lewis, currently run a bed and breakfast inn in New York State.