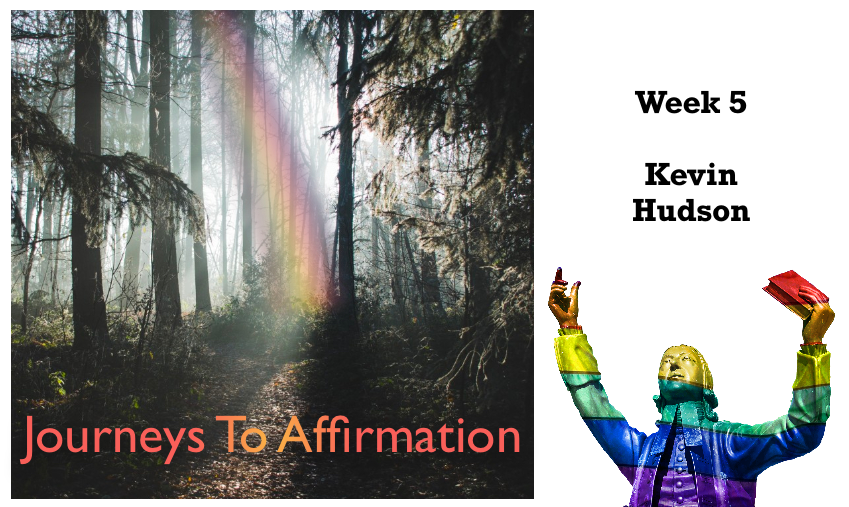 My Journey from Struggle to Self-Acceptance

I’m a life-long United Methodist…born, baptized, raised, confirmed, called to ministry, and ordained in the United Methodist Church.  I love the UMC theology, doctrine, and mission. It’s shaped who I am today.

I was in middle school when I first understood what the term homosexual meant.  I realized that’s what I was since I was having feelings towards guys. When I got into high school the feelings continued to grow.  I was actively involved in my youth group at the United Methodist Church my family attended in central Georgia. The only message I heard from the church at that time regarding homosexuality was that it was something bad, sinful, and an affront to God…something definitely not to be accepted or embraced.  While in high school I avoided one-on-one dating, going on group dates instead, as that seemed to be the safe route to take while wrestling with same-sex feelings. It was also during this time that I began to sense that God was calling me into ministry. Yet, this “gay” thing was a problem. How could I be gay and a minister?  It seemed to be an insurmountable obstacle and caused me to dismiss my calling.

During college I was active in the Wesley Foundation at the University of Georgia.  This was my first exposer to an Evangelical Christian community. I made some wonderful friends.  While there, I continued to wrestle with what I knew was a call from God to go into ministry. Yet, I was still “struggling” with being gay.  That’s what I called it…a “struggle” because I believed being gay was bad. What I’d learned, and was being reinforced at the Wesley Foundation, was the idea that accepting being gay was not a good thing.  I was becoming convinced that the only option for me was to remain single and celibate for the rest of my life. It was during my time at the Wesley Foundation that I first shared with a friend that I was gay.  It was also there that I first met other gay Christians who shared my perspective that being gay was wrong and that singleness was simply our lot in life. I continued to run from my call to ministry. One evening in the midst of a revival service at the Wesley Foundation, as the preacher spoke it seemed as though I was the only person in the room.  I realized God was calling me to ministry and I simply needed to accept that call and trust that somehow God would help me deal with being gay and a minister.

Not long after, I went with some other UGA students to visit Asbury Theological Seminary.  After one visit I knew that was the place for me. So, in the fall of 1994, I began my journey toward ordination as a seminary student at Asbury Theological Seminary.  My time there was very rewarding. I quickly made some amazing friends and grew in so many ways. One of the key factors to my growth was a group of guys I met with regularly in an accountability group.  I was able to share my “struggle” with them and they encouraged me. There were also other gay students I met who I became friends with as we “struggled” together. I also become close to a professor at Asbury who had the reputation of befriending LGBT students.  Partly because of this reputation, he was known as the “liberal” professor on campus. I met with him and shared my story. He became a trusted mentor and friend by simply being someone who walked with me through my experience.

It was also at Asbury that I first heard about conversion or reparative therapy.  When I learned that people who had gone through conversion therapy claimed to have become straight, I was sold!  This was what I had been hoping for! My first semester at Asbury I met with one of the counseling professors to begin reparative therapy.  After that semester, I met regularly with a Christian counselor in the local community and did so for the remainder of my time in seminary. My experience with reparative therapy had a very distinct pattern.  I would meet with the counselor, increase my devotion/prayer time, go to worship more, try to be a more devout Christion, realize applying what I learned in counseling wasn’t working, fail, be depressed, go back to reparative therapy, and repeat.  It was a very stressful way to live. It also led me to compartmentalize my life…I had the Christian part (being the person I wanted everyone to know about) and that deep, dark part that I could only share with my most trusted friends.

I remember one day sitting in an Asbury senior administrator’s office and sharing my “gay” story with him.  After listening and praying with me, he offered some advice, “Kevin, I know you and (name of female seminary student) are good friends.  I think you should ask her out on a date.  I have a feeling God might do great things through your relationship with her.”  I paused for a moment to make sure I had really just heard what I thought I heard.  Then I forced a smile and said thank you and left. It wasn’t very helpful advice. However, I found that was a common belief among many professors and students…just date and go to reparative therapy and eventually you’ll become straight.

After graduating Asbury Theological Seminary in 1998, I served as an associate pastor at a large downtown United Methodist Church in South Georgia.  I had wonderful colleagues and friends and I even shared with a few of them about my “struggle” with being gay. I continued to compartmentalize that part of my life.  I also gave up on reparative therapy, as it was obviously not working. In fact, many of the organizations advocating reparative therapy were coming under scrutiny and admitting there was no scientific or medical proof of success.

I was ordained an Elder in full connection in the United Methodist Church in 2000.  In June of 2005 I entered active duty as a chaplain in the United States Air Force. This was still during the time of the Don’t Ask, Don’t Tell policy.  At that time, I was still closeted and had, once again, resigned myself to the fact that I would never be straight and would simply have to be single and alone for the rest of my life.  All the while, as society and the Church began to rethink objections to LGBTQ inclusion, I believe the Holy Spirit was at work in my heart, preparing me for a day when I would fully embrace all of who God had made me to be.

In December 2010, legislation passed congress that officially ended the Don’t Ask, Don’t Tell policy effective September 2011.  From January to July 2011, I was temporarily assigned to a base in Tampa, FL. While there I began attending a very flourishing United Methodist Church.  It was there that I first encountered openly gay individuals and families who were actively involved in the life of the church, including leadership positions.  I met with the pastor, who also happened to be an Asbury Theological Seminary graduate. Knowing I was fully educated in the Evangelical perspective on LGBTQ exclusion, he encouraged me to explore writings, teachings, etc., that offered another perspective.  Over the next six months I spent a great deal of time in conversation, reading, praying, fasting, worshipping, and being open to God’s leading. By the end of that six months I had done a complete reversal of my beliefs about LGBTQ inclusion in the church. For the first time in my life, I embraced being the 100 percent authentic person God created me to be, including being a gay man.  The “struggle” was over! It was one of the most liberating feelings in my life! In the Fall of 2011, I came out to my siblings and parents, also a positive experience.

As I continued to become more confident in my whole self, I soon began to realize that the day would come when I would need to come out publicly.  With the Don’t Ask, Don’t Tell policy gone, there was no longer a fear that my military career would be in jeopardy. Finally, in March of 2016, I came out publicly via a Facebook post.  I was surprised at the amazingly positive reaction I received from so many friends and colleagues.

Now, as an openly gay pastor and chaplain, I seek to be an advocate for all who are marginalized for simply being who they are.  And my hope and prayer is, that in the not too distant future, there will be an expression of Methodism that is inclusive of ALL people, regardless of the labels and divisions we humans have created.

Kevin Hudson lives in Montgomery, AL.  He is an ordained Elder in the Pacific Northwest Conference of the United Methodist Church and is currently endorsed by the UMC Endorsing Agency and serving as a chaplain in the United States Air Force.  He graduated from Asbury Theological Seminary’s Wilmore, KY campus in 1998 with a Master of Divinity.