Home/United Methodist Church/Journeys to Affirmation 03: From Troubled Waters to Peace 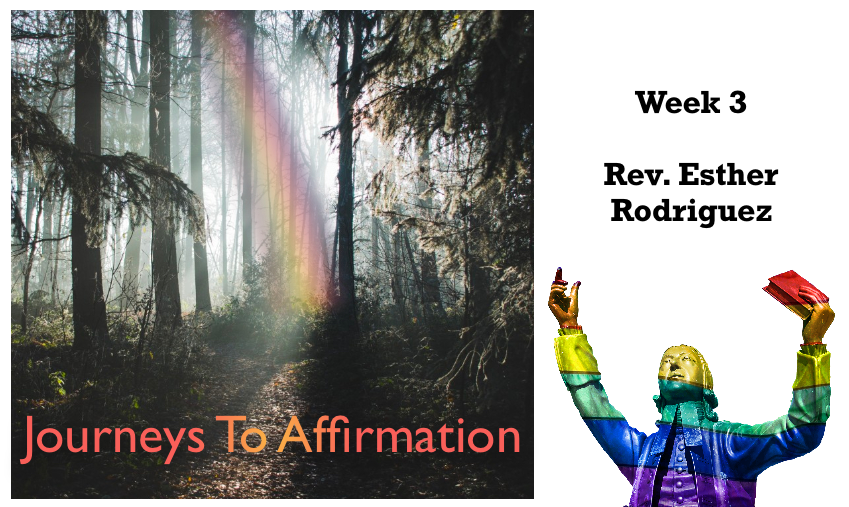 From Troubled Waters to Peace

I can still remember the moment with surprising clarity, though it was the better part of a decade ago. We were in a big-chain coffee shop. I was sitting with my back to the window, near the door – facing the busy line of people waiting for their afternoon caffeine fix.   She was directly in front of me facing the window that revealed the parking lot.  She was fidgety and I wondered if it was because it was a vulnerable conversation to have with a pastor you didn’t even really know. The truth was that I too was at least internally fidgety. Pastors get nervous too, after all.  I was meeting with her because for a few months my new Senior Pastor had been telling me he wanted me to meet with this young adult who had been attending the church for some time.  She was, as he’d told me, very bright, opinionated, filled with lots of questions and, oh, a lesbian.

The reality was that although I was only some five years older than her, it was only in the then recent past that I had been aware of knowing and having spoken to gay persons.  In fact, I had been wondering where I stood theologically on such an idea for some years.  I had been raised in a conservative, close-knit Puerto Rican family and Hispanic/Latino faith community.  My life had been founded in large part on a life of faith and the life of the church.  I sometimes joke that if I believed in past lives, I would guess I’ve been a cleric every time – that’s how integral my call to ministry has felt to me.

It had been in part the memorized Bible verses and coritos* that had kept me alive in my adolescence through struggles with anxiety and depression. These verses, I had believed later where things I clung to desperately instead of being things that held me, as they were meant to be.  My faith, as a result of the theology and form I was exposed to and my own temperament was one where I always felt I would never be good enough.   A faith where God tolerated people at best.  One where harsh judgment was inevitable. A faith grounded on rules. Where God seemed more petty than merciful or just. What could such a faith and such a Bible speak into my anxious life?

In college when I was told the Bible was not to be understood literalistically my world seemed to be pulled out from underneath me. Disequilibrium is no fun. By the grace of God and perhaps the stubbornness of my character I kept walking – trusting somewhere I would find my way again.  I ended up at Asbury Orlando seminary.   Ironically it was at Asbury Orlando where I fell in love with the Bible again, and in a new and ever transforming way.  Although even at the time the seminary did not hold an affirming posture, it set the stage for my renewed love, respect and awe of Scripture – one that led to this Reformation moment. It was a space where grace took on flesh. A space where I was able to wrestle, learn, and where I was challenged to be uncomfortable.

By the time I was sitting in this coffee shop, seminary was in the past. I’d served in full-time ministry for several years after graduating, and new paradigm shifts had been at bay.  I had described the state of my soul in regard to my understanding of homosexuality as troubled waters. I said as much to her that day; I was surprised then and still now at her graciousness. I was in a space where I genuinely did not know what to believe. I could talk the talk of “mystery” and “gray” and I also longed for peace. It was a troubling time for someone for whom truth matters deeply as does the care for all persons.  How did one hold those in tension? How could I reconcile what I had been told to be true – directly or indirectly – that homosexuality was a sin, and a new discomfort that would not let me go where my grace and pastoral impulse very clearly tugged me in a different direction. Grace and truth – both/and – were things I lived by and in that moment didn’t know what to do with.

In the months leading up to that encounter it is as if God had opened the door to building relationships that would change me.  Weeks before sitting at this coffee shop I had begun to know persons, like this young woman, whom I would come to know as friends and colleagues. These were persons of deep faith, faithfulness to God, love of neighbor, and profound humility who taught me what it looked like to follow Jesus. They were persons who were gay and lesbian. Some ‘out’ and some not.  Some at moments of peace on their journeys and others in deep turmoil.

In that coffee shop, almost as if standing near a burning bush with my shoes off I heard a voice inside me that affirmed the voice that had been tugging and yanking. These persons were beloved… as they were. Not in a conditional way. Not in a “they’re beloved and they’re sinful in this particular way.”  But a “They’re beloved and I’m at peace about it,” from God –  so you also be at peace about it.

I remember feeling an untightening, a loosening in my chest in that moment. Peace for my ‘want-to-make-sense-of-it-all mind.’  It was as if a move of the Spirit not only that day but in the weeks that followed.  Steve Harper’s book ‘For the Sake of the Bride’ came out shortly after that and I was gifted with deeper relationships and the privilege of walking uncertain journeys with dear friends. I continued to make sense of this understanding and again appreciated the Wesleyan Quadrilateral to put into words this new truth. My assurance of the things I now believed to be true was taking on flesh more and more.

In the years that have followed I’ve had the absolute gift of being the pastor that young persons have come out to and to unequivocally affirm their belovedness. In these years I have also lamented the brokenness of the denomination I serve as it relates our understanding, lack of understanding, and fear of real and holistic dialogue around sexuality. I’ve grieved the injustice of my coffee-shop friend leaving the church and not pursuing a call to ministry in my denomination, and more frustrations than I can count.

I still reflect on how my world paradigms have shifted from the Spanish-speaking, corito-singing evangelical pews. Yet in other ways it has been those coritos and memorized Spanish verses that have sustained my faith in the recent past, and a genuine faith that was exemplified to me by my parents. For this prevenient, justifying and sanctifying grace in my life, I am thankful. I am still learning. I am still being changed.  I am still stumbling after Jesus.  And even in my deepest frustrations and grief, I remain confident that God’s love wins.

This is what I shared in my social media post right after the 2019 Special Conference:

I don’t have many words at the moment. As a person who was called into ministry in the UMC and as a follower of Jesus, I’m heartbroken. For now I will simply share what I know to be true.

I continue to mourn our inability to listen to one another, to acknowledge harm, and how we continue harm. I covet your prayers for the UMC and for those we serve and for those who serve it. Pray for (and love on) those whom we have harmed today — discussed by General Conference and those not even mentioned. Lord, in your mercy, forgive us, heal us, and hear our prayer.

*Coritos is the colloquial word for typical, Spanish Christian songs.

Rev. Esther Rodriguez is an Elder in the Florida Conference of the United Methodist Church. She is currently serving as the lead pastor of Spring of Life UMC in Lake Nona. She graduated from Asbury Theological Seminary’s Orlando Campus in 2011 with a Master of Divinity.