Home/United Methodist Church/Journeys to Affirmation 02: My Life Is Not a Paradox 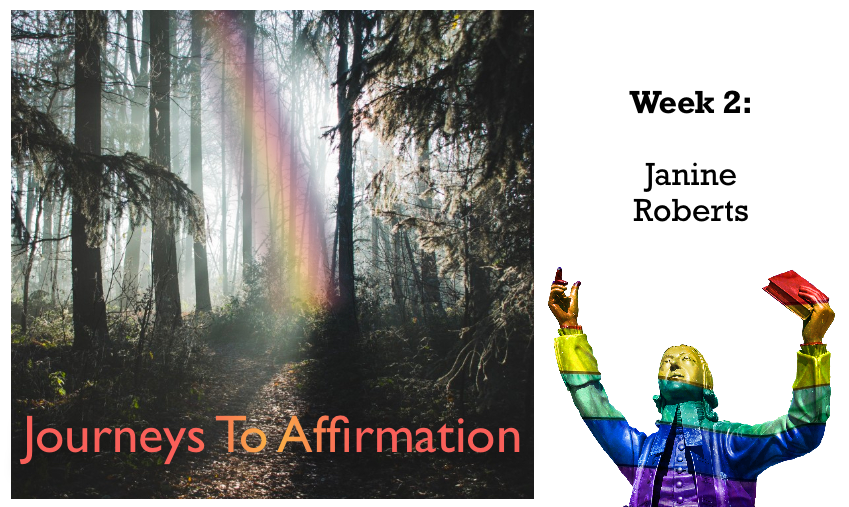 My Life is Not a Paradox

I was baptized in 1977 at St. Paul’s United Methodist Church.  It was Christmas Day and I had just turned three months old. My parents and grandparents, along with my whole church family, promised that day to nurture me and teach me until I had enough faith to accept God’s grace for myself.

Growing up, I don’t ever remember hearing the word lesbian. I didn’t know it was even an option. I guess growing up in a small town in West Virginia during the 80’s and 90’s it probably wasn’t one. But looking back I do remember being in the second grade and thinking that a particular fourth grade girl was very beautiful.

When I was in the sixth grade, I joined confirmation class and reaffirmed my faith. The next year I attended a United Methodist summer camp.  After a particularly meaningful communion service, I climbed onto the balcony of my dorm room. I looked up at the full moon with tears streaming down my face and knew with all my heart that I believed in this Jesus that I had learned about for so many years.

Later in junior high, all my friends were starting to have crushes on boys. I quickly realized that I would need to develop a crush too so that they wouldn’t be suspicious. Suspicious of what I couldn’t tell you. But I knew enough to choose the most popular boy in school so there was no possibility of actually going out with him.  Later in high school, I was asked out by a boy in my English class. We went to dinner and a movie. He was funny and kind. But something inside me knew I needed to act a little standoffish so he wouldn’t ask me out on a second date.

Throughout high school I was very involved in my church.  I played hand bells and flute, held an office in my youth group, and participated in service work. I was later accepted into a United Methodist college where I studied Elementary Education.

During my college years, God placed an increasing desire on my heart to go to Africa. I joined a mission team in 1998 and spent three weeks in Africa at a children’s home located on a United Methodist mission. I fell in love. Not with a person, but a people, a culture, a land.  After returning home, this love consumed me and continually drew my thoughts back to the red clay roads winding into the heart of the valley where my children lived.

I felt very strongly that I wanted to go back there more permanently, but I wanted a closer relationship with God first. My pastor at the time told me about the seminary he had attended. I went for a tour during Spring Break and loved the small town and the school’s program. I met another prospective student on the tour and we decided to be roommates. Everything fell in to place seamlessly.

The seminary asked us to sign a paper that stated we would not “drink, smoke, or participate in anything that supported homosexuality” during our time at the school.  I read the statements and thought to myself, “I can follow these rules for three years.” I proceeded to sign the paper.

The classes I took were so interesting and relevant. I was taught to separate my Western culture from my faith so that I could see where God was already at work without imposing my own culture on others.  I was taught to go as a learner and work alongside people in efforts they knew were best for their community.  I was encouraged to be a part of an accountability group where I learned to trust friends who helped me grow even more in my faith.

My last year in seminary, a play was performed on our campus about a young man who was gay and contracted AIDS. I don’t remember much about the play except that as Christians we were supposed to show love to the man despite his lifestyle. Love the sinner, hate the sin. My mind clouded with confusion when I heard this statement, and I felt a part of myself retreat as a means of protection.

As soon as I graduated in 2004, I moved to Africa at the height of the AIDS epidemic. Many of the middle generation had died, leaving children and grandparents to care for each other. I joined African health care workers as they identified child-headed households in the surrounding villages. We started programs that allowed children to stay in their communities instead of relying on overcrowded orphanages. My work was challenging, and I loved it.

Although my work was so rewarding, I began to think about sharing my life with someone.  More and more, I realized that my desire was not for a husband. I decided to explore this further and purposely chose a mentor who would push me to think critically and not just tell me what I wanted to hear. After many discussions, I concluded that I was probably a lesbian, but was not ready to figure out what I would do with this information.

In 2014, my work visa was not renewed.  I would have to return to the United States.  That September I was hired as the Director of Missions at a large United Methodist church in Houston, Texas. The staff became a family to me and embraced me through all the loss I was experiencing. It was a huge adjustment to leave my African family, move to a new city, start a new job, and readjust to American culture. I decided to find a good counselor.

With all these changes, I was surprised by my answer when my counselor asked what I would like to discuss first. I told her I needed to know definitively if I was a lesbian and if so, what I wanted do about it. After several more months of processing, I was finally able to fully accept who I am.

As I drove home that day, I said it out loud for the first time. “I am a lesbian.” A feeling of peace settled over me. I felt God say, “Yes, this is who I created you to be.” I decided at that moment to trust this confirmation and walk forward cautiously but bravely into this new freedom. Little by little, I began speaking my truth to others and even gathered the courage to go on my first date.

I felt relief and comfort as I began to share my truth with close friends and family. I was slowly building a tribe of people who loved and supported me no matter what.  However, as I continued working at the church, the decades-long controversy over issues pertaining to homosexuality intensified. The denomination could not reach an agreement on whether pastors could perform same-sex marriage ceremonies and whether to allow those who are openly gay to be ordained.

Up until this point, I lived in relative secrecy because of this indecision. When people I didn’t know well asked me if I was dating someone I gave a vague answer. I introduced my partner to others simply by her name with no further explanations. But in February 2019, United Methodist delegates from around the world passed the Traditional Plan.  As part of the vulnerable minority directly affected by that decision, my fiancé and I chose to leave the denomination in order to find a place where pastors and leaders are encouraged to actively speak up on our behalf and allow us to live authentically.

We made the difficult decision to leave Texas and move to a part of the country that is generally more open and affirming.  We chose to be part of a church family who openly celebrated our marriage, is willing to help us grow as a couple, and allowed us to make our vows inside the church.

The United Methodist Church helped guide and shape my faith throughout my entire life.  It was extremely confusing when some of those who baptized me, confirmed me, fully affirmed my relationship with Jesus, my calling into ministry, and my ability to lead others in their faith journey stopped short at allowing me to be married in a church.  They claim that my loving, faithful relationship is incompatible with Christian teachings.  To me, these actions are paradoxical. I have outgrown believing that I am a paradox, and will continue to tell my story to help others who are on their own journey outgrow this belief as well.

Janine Roberts lives in Washington with her wife Erica. She is currently the Executive Director of Cowlitz County CASA, advocating for abused and neglected children in the foster care system. She attended Asbury Theological Seminary from 2001-2004 and received a Master of Arts in World Missions.