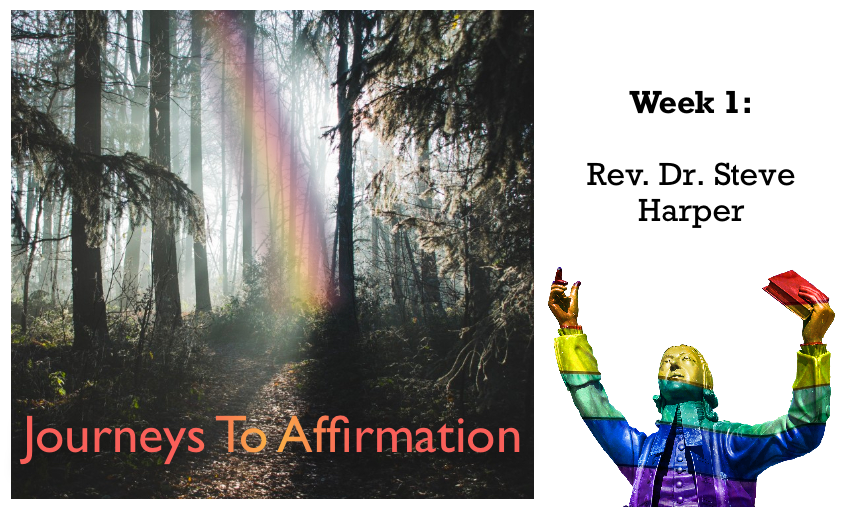 Laboring in the Vineyard

​Like the final person hired to work in Jesus’ parable of the vineyard (Matthew 20:1-16), I came late to the privilege of being an ally with LGBTQ+ people.  I spent decades of my life and ministry essentially in the “welcoming but not affirming” part of the Church. I trusted my teachers and mentors without doing my own homework to see if I might be missing something   I largely passed on what I had been taught, assuming it was the Christian view. I willingly participated in groups that discriminated against LGBTQ+ people in general and LGBTQ+ Christians in particular, some more actively than others.  It was not until the season of Lent in 2014 that I came to the end of that journey and commenced my new one that has led me into the full affirmation of LGBTQ+ people, an affirmation that advocates for their full inclusion in the ministries of the Church, including ordination and marriage.

​Like so many others these days, I had an “enough is enough” experience during Lent of 2014, as nationally-known Christian leaders inside and outside my denomination (The United Methodist Church) made statements and took actions that demeaned and harmed LGBTQ+ people.  Their mean-spirited bravado was sickening to me, and I knew I had come to a crossroads. My experience was heightened by the fact that I had committed myself to use The Book of Common Prayer as the organizing resource for my spiritual formation in Lent. Even before the fundamentalists took fresh aim at LGBTQ+ people, I was praying prayers that included acknowledging “the great danger we are in by our unhappy divisions,” with the accompanying request that God would “take away all hatred and prejudice, and whatever else may hinder us from godly union and concord.”  The Spirit was speaking directly to my spirit saying in effect, “You must either be about the work of healing these dangerous divisions, or stop praying the prayers.” At the time, I had no idea what kind of work that would be; I only knew the time to fish or cut bait had come to me. A genuine transformation had occurred; I did not know where I was headed, I only knew to where I could not return.

​With more than five years of perspective, I can see that God’s grace was at work in me prior to my break with non-affirming views.  Some things were longstanding. All the way back into my childhood, I had memories of the way my parents loved and befriended all people. I also inherited from my parents, my church, and my own Christian journey a belief that the fruit of the Spirit is the essence and expression of Christlikeness.  Even in my non-affirming theology, I never believed that I was permitted to knowingly violate any of the manifestations of the fruit of the Spirit in my relationships with people, including LGBTQ+ people. Some of my former students (including LGBTQ+ ones) remember me as a “welcoming but not affirming” professor with whom they could share honestly, knowing they would not be judged or turned away. I am glad for that, but I also realize that the “welcoming but non-affirming” stance enabled me to live with the illusion that I loved LGBTQ+ people when I actually did not love them fully.

​Another factor that influenced my change of heart was my connection to ecumenical Christianity.  Even though I have been a Wesleyan Christian throughout my life, I have learned from this tradition that we are all part of something larger—the Body of Christ, in all its variations.  This has kept me in touch with people and perspectives other than the ones I personally held. Ecumenical Christianity taught me that there are equally competent scholars other than conservative ones, and equally devout Christians across the spectrum of faith—that no one group has a copyright on truth.  That knowledge has served me well in becoming an LGBTQ+ ally. I have discovered credible scholars who reverence Scripture as much as any conservative, but who nevertheless espouse a different theology of human sexuality. I have learned much from them and through them gained confidence that there is more than one plausible way to read the Bible regarding LGBTQ+ matters, despite what some folks say.

​From the same ecumenism, I also learned there are cycles of decline and renewal, and thanks to people like Phyllis Tickle and Brian McLaren (and now many others), I became convinced that we are living in a time when God is doing a new thing, as in times past.  I did not initially connect this renewal with an affirming theology of human sexuality, but after Lent of 2014, I have done so. I believe that the awakening (by whatever name it is called) is a movement of the Spirit to unify Christians and restore in us the reality that we are one human family.

​To these factors, I have since added two others.  First, is my schooling in Inductive Bible Study methodology (both as a student and teacher of it), which has enabled me to see that there is more than one legitimate way to read and interpret Scripture in relation to LGBTQ+ people.  The second additional factor has been the relationships I have established with LGBTQ+ Christians since 2014. In fact, knowing and being befriended by LGBTQ+ people has been the ultimate confirmation of everything else. When LGBTQ+ people became friends, I quickly discovered that allegations made against them by fundamentalists are simply not true.  I have found people in the LGBTQ+ community in general who are people of the highest character, and I now know firsthand that LGBTQ+ Christians are as devout in their faith and devoted in their discipleship as anyone could be.

​The journey continues.  In fact, I don’t think it will come to an end.  The portrait continues to receive new colors and textures.  My roots are going deeper. My perspective continues to widen.  Most recently I have come to see the topic of human sexuality in general and LGBTQ+ sexuality in particular within the large scriptural hermeneutic of love.  Along with that, mounting evidence from the physical and behavioral sciences confirms an inclusive theology. Nonbinary sexuality is now a proven fact.

​ I am also discovering the importance of enacting the principle “learn globally, act locally.”  I follow several affirming ministries online, and I am involved locally with LGBTQ+ people and with related advocacy groups, both ecclesial and civic. What I have learned is that there are many ways to be involved, and that our particular way is (at least initially) through some talent or capacity we already have.  Writing and speaking have been two of my main ways. I have learned that becoming an ally with LGBTQ+ people means investing who you are and what you can do on their behalf.

​But even after more than five years, I am still a visitor to the LGBTQ+ playing field.  They are the home team. I have much yet to learn. Where is all this leading me? Of course, I cannot say for sure, largely because much of what I have experienced came unexpectedly. So, I am sure I have more surprises in store. More than anything else, I believe I must remain open to the new things God will continue to teach me.  But even though I came late to the vineyard of LGBTQ+ advocacy, I am in the field. The light is bright. The air is clean. The grapes are ripe unto harvest and being transformed into Kingdom wine. I thank God that I lived long enough to be an ally.

Steve Harper is a 1973 alum of Asbury Theological Seminary.  From 1980 until 2012, he served as a professor of Spiritual Formation and Wesley Studies.  And from 1998-2010, he was the Vice President at the Florida Campus of the seminary.

About this series: Journeys to Affirmation is a group of people affiliated with Asbury Theological Seminary who are sharing their stories of how God’s grace moved them from non-affirming to affirming of LGBTQ+ people. New stories weekly.