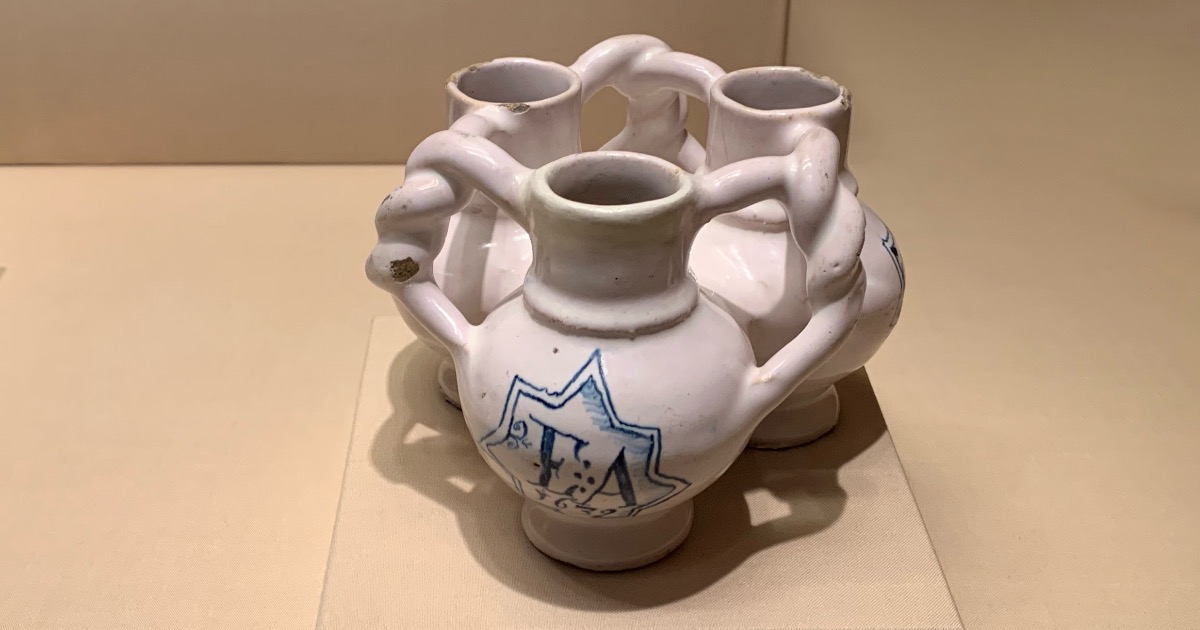 When I visit museums, if you pardon the pun, my eyes glaze over when we reach the ceramics exhibits. I’m not as enchanted by bowls or plates as much as sculptures and wall art. I tend to saunter through such exhibits with barely a glance.

But walking through a European art exhibit at Nelson-Atkins Museum of Art in Kansas City, I was immediately drawn to this 1639 earthenware from London called a “Fuddling Cup.”

I thought it was a communion cup for three, or a shot glass for a trio of tastings, but I was soon mistaken. Here is its description:

These three cups are joined by the handles and are also internally interconnected. With phrases such as “Fill this cup and drink it up” inscribed on other cups of this type, the unwitting drinker was deceived into drinking the contents of all three cups, thus leaving the drinker in a be-“fuddled” state.

At first glance, it looks as if one would drink from just one cup, but the drinker would soon discover that they are actually drinking from all three.

In United Methodism right now, there’s a prevailing narrative that we are a church of three separate cups: Progressive, Centrist, and Traditionalist. We are at the breaking point of contention without a common future, and we should separate in some way to drink from separate cups.

Many of the plans for our future (see this helpful list here from Rev. Becca Girrell in New England) have us dividing into separate cups, or dissolving the connecting handles altogether.

The prevailing narrative in the church today is that we are three cups, and we should divide to allow each of us to be on our own and seek the fullest expression that cup can provide. Only then can we head into a stronger future with full cups of our own making.

Unfortunately, we will be fuddled indeed if we fall prey to this narrative that we would be better apart than together.

The ceramic trio of cups from 1639 could not be broken into its individual cups and still be useful. The bodies are connected at almost their lowest point. To break them apart is to expose not individual wells, but a common one—whose now separate containers could no longer hold the liquid they once could. Each container, once broken from the others, could only manage a shallow amount of liquid, a tenth of what all three could hold together.

No United Methodist is the product of one cup only. We are all informed, shaped, and share the same water of baptism and the common pools of learning, experiencing, and serving. Our one cup is found on the communion table, not in our individual makeup.

I myself am a progressive who was raised in the traditionalist pools of the Bible Belt, and was educated at Boston University, an experience which oddly I would call more centrist than progressive (at least as marked by the professors in the early 2000s). I was commissioned and ordained by Traditionalist hands. I now serve in progressive Seattle among many exvangelicals (evangelicals who have left the church and returned) and agnostic/free thinkers and retired centrists. I draw from all three pools when I preach, teach, and testify to the power of Christ to transform the world.

And I believe you drink from all three cups too.

There is death in that pot

In Scripture, the prophet Elisha traveled to Gilgal during a famine, and prepared a common pot of stew to save them. The gathered people tried to eat it, but could not, crying out “there is death in that pot.”

“There is death in that pot” is a common refrain for the three encampments in United Methodism as well.

By breaking apart from the others, each expression believes they would no longer be threatened by the death in those other pots. Even Centrists see value in cutting out the radical 10% on each end of the spectrum, leaving the 80% to continue the common institutions and missions.

There is death in the pot. But it is in someone else’s cup, not our own. Right?

Throw in something new

In the scripture, Elisha solved the dilemma of the death in the pot not by throwing it out, but by introducing something new. Flour was thrown in the pot, neutralizing whatever was causing the rancidness of the stew. The people broke the famine and were able to feast. Either by divine inspiration or wisdom from his travels, Elisha knew what new thing would cure the death in the pot.

We can only cure the death in our own pots by allowing the three to mix. I believe each expression has a key gift that comes to full life-giving potency when the flour of the other two cups is mixed in.

The fuddling cup shows us that we are better together, yes, but rancidness in one cup affects the others. By breaking apart, we are doomed to our own stewing. But together we can make the other better, cure the sources of death, and restore a common cup that is overflowing with life.

Will we be Fuddled Again?

But although a difference in opinions or modes of worship may prevent an entire external union, yet need it prevent our union in affection? Though we cannot think alike, may we not love alike? May we not be of one heart, though we are not of one opinion? Without all doubt, we may. Herein all the children of God may unite, notwithstanding these smaller differences. These remaining as they are, they may forward one another in love and in good works.

General Conference 2020 is looking more and more like a repeat of 2019: multiple plans, no frontrunner to craft together, rigid posturing by all sides, and saber-rattling by Traditionalists who believe they hold the votes and purse strings but no responsibility.

By breaking apart, we avoid the rancidness in the other cups, but we find ourselves with diminished capacity and inability to solve our own rancidness. We are not called to be holy solitaries. We would then turn on the margins of their own cups, and the cycle will repeat again.

All of the plans submitted so far separate the cups in some way. My hope is the leaders (not the paid caucus group employees) can come together on a plan that achieves all three above at a minimum and allows us to drink from the same cup together.

Generations of church have found themselves surprised, delighted, and befuddled that we drink from more sides than we think. By breaking up the common vessel, we leave ourselves with diminished capacity, and an inability to solve the death in the other pots, and indeed the death in our own.

Let us add all three back together—evangelical zeal, full inclusion, and common life—and find ways to allow the three cups to continue to be shared, befuddling all who think they know their life is better without diversity, and yet delighting them when they see that three is greater than one.