Home/About/Site News/The rumors are true: I officiated a wedding on “Say Yes To The Dress” 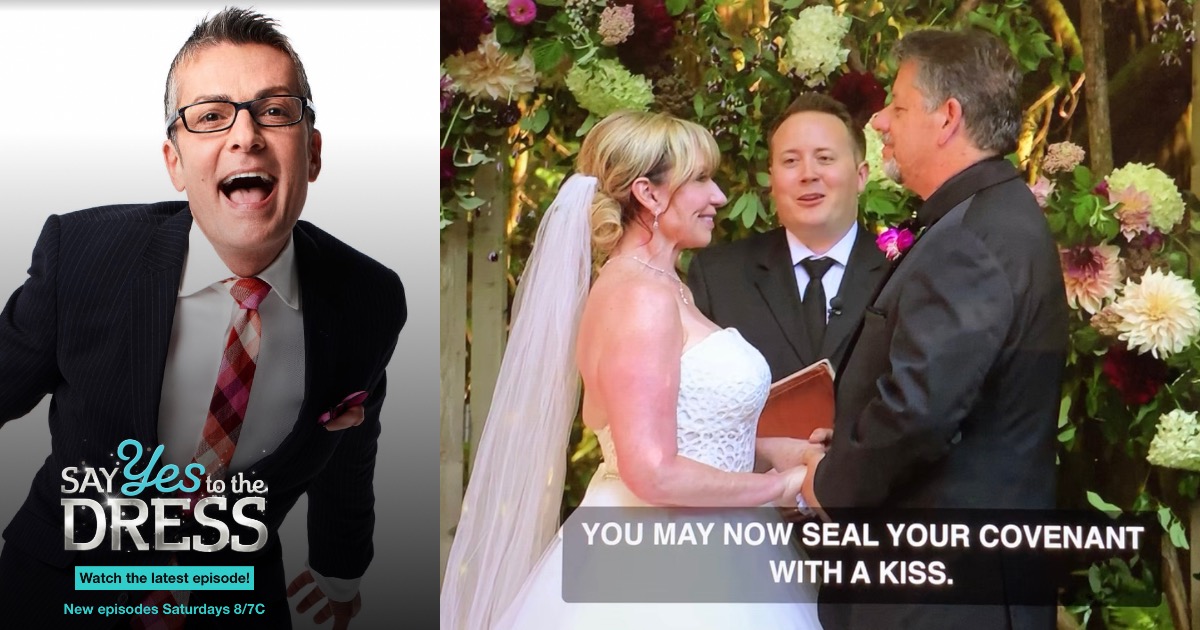 It started on Saturday night: I got a Facebook message from a friend in the midwest saying “You are famous on TLC!” And then folks on one of the United Methodist agency staff groupchats apparently asked “Did I just see Jeremy Smith?”

I’m here to say the rumors are true: I officiated a wedding on a famous reality TV show.

The summer of 2017, I officiated two of the most unique weddings I’ve ever been a part of in my over a decade of pastoring.

The first one was a destination wedding on top of one of the foothills of Mount Rainier in Washington state. We hiked three hours uphill with all the gowns, suits, drinks, food, everything in the wedding party’s backpacks and had a classy celebration at a lodge on the top. So strenuous and so beautiful and a bonding experience for everyone!

But the second one had three factors that made it even more unique than that one!

So a professionally-filmed destination wedding for a family member. Sounds like a lot? Yep!

But I’m happy to report the day of the wedding was very smooth. The camera crew was a local team so they knew the area. We didn’t get to meet any of the reality tv on-camera personalities, but the locals were professional and unobtrusive as possible. The ceremony and reception and big family event went off without a hitch.

Two years went by and we didn’t hear anything from the producers. That’s understandable: some stories don’t make the cut. Our families settled back into their routines and celebrations (including one more family wedding during that time—yes, I officiated that one too).

Say Yes To The Dress

Two years later, on September 7th, 2019, the long-running hit reality TV show Say Yes To The Dress premiered the 9th episode of their 18th season entitled “Bedazzled Truck Driver” on TLC. As it typical of the show, that’s the name of their main story, but they wove in two other brides’ stories into that episode. And the final bride-to-be in that episode was none other than my mother-in-law Trish.

For 6 minutes on reality television, viewers and fans got a glimpse of her story of finding love after over 20 years of single parenting five children, all of which are married now with their own partners and families—and one of which is the long-suffering companion of this pastor/blogger (love you!).

Viewers heard Trish’s fear that she wouldn’t have the same feeling of joy at dress-shopping as the 20 year olds, and yet she found the dress she wanted and had the ceremony she dreamed of for twenty years. As the tag line to the show read “a glam wedding proves you are never too old to be a princess.” It was an affirming take on the family’s life and joy of the moment.

I could talk more about the family I’m a part of and the show, but this is a pastor blog and I suspect this community would rather hear about the wedding ceremony.

It was a typical United Methodist ceremony (I’m a United Methodist pastor), with scripture, readings, live music, sermon, vows, exchange and blessing of rings, prayers, and sending forth. Nothing was edited away for the sake of TV production, and the producers simply used what scenes they wanted to use.

The only change to the ceremony came during the vows. At the bride’s request, I changed her vows slightly as a surprise to everyone (we didn’t even rehearse it). She believes strongly in aligning the words you say with what you want in the world. So instead of the traditional “For richer or poorer” she said “For richer or richer.” It was a funny line for the gathered community and the good humor surprise on the groom’s face was worth the diversion from the usual.

Finally, the camera crew was impressed at one practice I do for all weddings I’m a part of. When it comes time to seal the ceremony with a kiss, which is a photographic moment, all too often the pictures have the couple and then the pastor looming between or above them! Very annoying! So I always step to the side when that moment happens, and you can see that happen in the episode. A pro-tip for wedding officiants everywhere!

A Witness to Ritual

So, now I can add “officiated a wedding on reality television” to my resume. I’m thankful for the opportunity given to me by the producers of the show and by my mother-in-law for choosing me to officiate.

If I can continue to be self-centered, I think this is not insignificant. Just like a billion people saw The Episcopal Church’s presiding Bishop Michael Curry’s sermon for the Royal Couple on television in 2018, thousands of folks saw glimpses of a United Methodist ceremony streaming on their screens!

Sometimes it is okay for proper theology and practices to take center stage to remind people that rituals matter and should be offered regularly to all people who want to celebrate God’s presence in their lives. When people don’t drive by the door of your church, you may choose to put your ceremonies on billboards by the roads people frequent. And likewise, you might have to go on reality TV to remind people of the power of proper ritual.

Thanks for reading this reflection on ritual and reality television, and blessings on whatever your reality is today.