Home/Theology/Justice/Why is United Methodist Women’s $50k gift to the Trevor Project such a big deal? 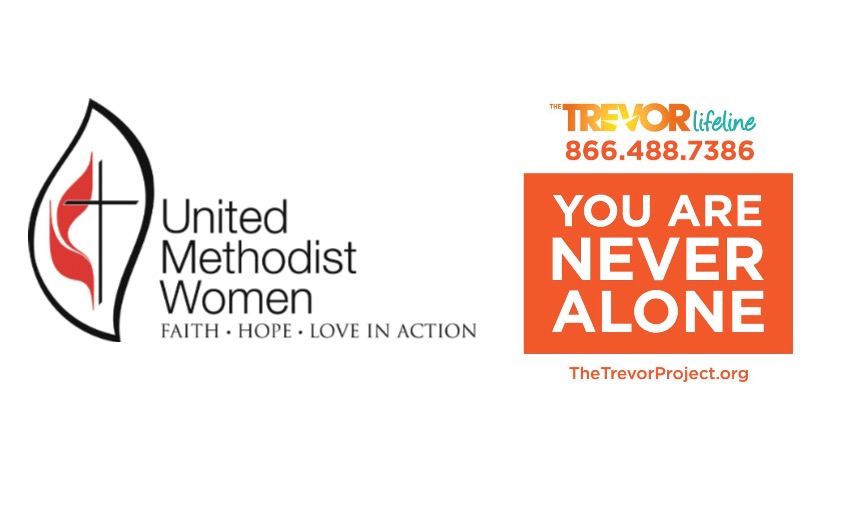 United Methodist Women continues to lead the denomination when it comes to prophetic acts of solidarity with the marginalized, with women and children being their primary missional focus. Included in that list are LGBTQ teenagers and young women who struggle with their sexual orientation, especially in a United Methodist denomination that has demonized and demoralized them for over 47 years.

So it is with joy that I read the press release this week from United Methodist Women.

United Methodist Women, the largest denominational, lay women of faith organization in the world, today announced it has awarded two grants for work to thwart suicide among LGBTQ youth. The organization committed to the needs of women, children and youth awarded two $50,000 grants to The Trevor Foundation and the Tyler Clementi Foundation for their work to prevent LGBTQ youth suicide.

According to the Center for Disease Control and Prevention, suicide is the third leading cause of death for youth between the ages of 10 and 24, resulting in approximately 4,600 lives lost each year. Another 157,000 young people are injured during suicide attempts each year. LGBTQ youth are three to six time more likely to attempt suicide than other youth.

“When we witness a problem, our faith compels us to act,” said Shannon Priddy, president of the United Methodist Women board of directors. “These grants are about supporting young people. Given that LGBTQ youth have an increased risk of being bullied in school and online, and since bullying increases the risk of depression and suicide among youth, we have a responsibility and the great honor of doing as much as we can to create environments that are safe and inclusive for LGBTQ youth, and to support organizations who are doing the same.”

The Trevor Project is the leading national organization providing crisis intervention and suicide prevention services to LGBTQ young people under 25, and the Tyler Clementi Foundation’s mission is to end online and offline bullying in schools, workplaces, and faith communities.

But it is newsworthy. Because The United Methodist Church has a long history of silence on LGBTQ programs and forbidding funding of anything that remotely offers affirmation and comfort to LGBTQ children. And learning that history brings much more weight to this United Methodist Women’s action—and a call for others to do the same.

History of The UMC Denying Ministry to LGBTQ persons

Barely a year after The United Methodist Church was created, the relationship between money and affirmation of LGBTQ persons came to the forefront with opposition to a student-edited magazine that affirmed LGBTQ persons. From Jane Ellen Nickell’s book “We Shall Not Be Moved: Methodists debate Race, Gender, and Sexuality” chapter 4.

“In 1969, motive, the UMC’s student magazine, created controversy when it published an issue on women’s rights that included a discussion of lesbianism. United Methodist congregations and individuals threatened to withhold their apportionment dollars, and the denomination’s Board of Education, which published the magazine, withdrew its support. Without institutional funding, motive ceased publication, devoting its final two issues to gay rights.”

The next General Conference in 1980 entertained discussion on prohibitions of gays and lesbians from being employed in church offices, and from using church spaces. These prohibitions were eventually voted down, but they speak to the desire of some to apply the funding ban to local church decisions.

“To ensure that no annual conference board, agency, committee, commission, or council shall give United Methodist funds to any gay caucus or group, or otherwise use such funds to promote the acceptance of homosexuality. The council shall have the right to stop such expenditures. This restriction shall not limit the Church’s ministry in response to the HIV epidemic, nor shall it preclude funding for dialogs or educational events where the Church’s official position is fairly and equally represented.”

Thus in Decisions 1081 and 1084, the Judicial Council ruled that the annual conference Councils on Finance and Administration (CF&A) are responsible for ensuring that no groups that promote the acceptance of homosexuality receive conference funding.

Finally in 2008, General Conference delegates voted to add an additional restriction for funds used for programs that would “violate the expressed commitment of The United Methodist Church ‘not to reject or condemn lesbian and gay members and friends.’” So they wouldn’t fund programs that directly affirm or directly deny the existence of LGBTQ persons.

(Editor’s note: sections of the above have been adapted from T.L. Steinwert’s 2009 Dissertation “Homosexuality and the United Methodist Church: An Ecclesiological Dilemma” at Boston University School of Theology).

Some Results of the Funding Ban

The effects of the funding ban were felt most strongly in educational and direct services areas. The Ecumenical Campus Ministry at Ohio Northern University had its United Methodist funding cut because of involvement with the LGBTQ community. In 2005, the University Of Puget Sound’s UMeth campus ministry was brought up for judicial review because of their welcoming statement. It seems campus ministries were the most scrutinized and vulnerable to anyone with an anti-gay axe to grind. And curriculum development always had to tiptoe around anything gay-related.

Most heinously, the funding ban on AIDS support and “in response to the AIDS epidemic” was not lifted until 1988, after countless numbers of United Methodists had died without any support or care substantial support from General Conference and The United Methodist Church (Editor’s note: see comments for more nuance to this time). At the end of 1987, the World Health Organization estimated 7-10 million people worldwide were HIV+. Up until that time, many in the upper echelons of United Methodism had to be silent or avoid offering care out of fear of losing their funding, and after that change, even local organizing efforts continued to be under attack. Examples include the HIV/AIDS Ministry in West Ohio in 1990 which ultimately prevailed over attempts to shut down its ministry to the HIV/AIDS community, and a RAIN team of meals-on-wheels for AIDS patients in Oklahoma City which continued for a time despite the ban.

United Methodist actions and inaction has contributed to this culture of fear and self-loathing by LGBTQ persons. We have been complicit and in some cases outright culpable of the harm and death.

While opponents of LGBTQ persons hide behind rhetoric and rationales, the reality is that United Methodist polity and funding bans have made us part of the reason  organizations like the Trevor Project need to exist in the first place.

Today’s gift from United Methodist Women to the Trevor Project and the Tyler Clementi Foundation helps begin to redeem decades of neglect of an at-risk population (which our own church has helped put at risk). The denomination has made even saving lives a risky move.

While it is in line with the Discipline in the way it was given and awarded, the renewal groups love to jump on anything UMW-related, especially when UMW takes tangible, bold, and faithful action. So I offer the above history to provide context of what the funding ban actually caused so you can see what tradition the complainants live into.

Today, there are places where the funding ban is an iron gate, and there are places where we can see the cracks. For example, a local church’s ministry had a grant denied by Discipleship Ministries because they had a statement of inclusion in their description. They removed it and it was affirmed the next year. But this year the Missouri Annual Conference approved funding a “new ministry in new places” effort specifically for and with LGBTQ persons. A church in Arkansas is renting one of its buildings to an LGBTQ youth shelter. The Oregon-Idaho Annual Conference has a staff person for LGBTQ ministries, which had to have a unique funding structure, and several annual conferences employ LGBTQ persons in annual conference positions. So there is still a patchwork effect locally and at the regional level even though the global structures continue to be banned from active ministry for and with LGBTQ persons.

My hope is that this gift inspires other agencies and annual conferences and local churches to begin to redeem the radio silence The United Methodist Church has had for over 40 years, and commit more resources to saving the lives of vulnerable LGBTQ+ persons—whose vulnerability was created by the polity and practices of The United Methodist Church in the first place.

It’s the least we can do—and if you don’t like it, as we say in the Bible Belt, bless your heart.

Thanks for reading, commenting, and sharing this post on social media.