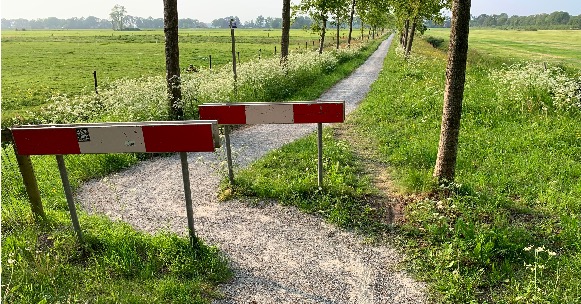 Paths to the same destination

I will sometimes take one of my daughters to a playground or a park. The one by our house has long concrete paths that wind around like they were poured by Dr. Seuss. Following them and pushing a stroller (my three kids gives me a lot of experience) will get you to the playground. But from the parking lot to the playground there’s a beaten path in the grass as children disregarded the poured concrete path and have worn their own path with their tiny shoes running straight to the playground.

Children show us that there are always two different ways to get to the same destination: the path the architect wants us to go, and the path others have created.

This analogy (and header image) works right now in The United Methodist Church because there are paths that the powers-that-be want advocates for the full inclusion of LGBTQ persons to walk down…and then there’s the paths are still being created beyond our polity and processes. Which one will prevail and guide us to a future expression of United Methodism that welcomes all?

The False Path of Obedience

As previously discussed, right now in The United Methodist Church, the Traditionalist perspective that LGBTQ persons are not to be full participants in the life of the church, is dominant. This calculated “wedge issue” that harms real people has bought and broken a 50-year-old denomination with an over 200-year legacy reaching back to Revolutionary America. At every level of General Conference and representation on global church leadership, 2019 showed the Traditionalist dominance of the denomination.

Some would think that the path being poured is the path of surrender and obedience: that Traditionalists want a tight polity that holds people accountable when they deviate from it, and that anyone who can stick to that polity is welcome to continue in Big Tent Methodism.

However, that is a misinterpretation. The self-professed “heart of the Traditional Plan” involved ways to forcibly remove entire annual conferences and to remove the pension benefits of excommunicated clergy. Thankfully, that heart was cut out and not implemented by the 2019 General Conference and Judicial Council.

Obedience was never the path being poured by the Traditionalists, and it is important for the average Methodist to understand that. They are not interested in sharing a denomination anymore—if they ever were. Instead, the primary path is the path of expulsion: make the progressives leave. So now we turn to see if those who want the full inclusion of LGBTQ persons in the life of the church will walk down that path—or will they make their own?

Pathways discerned by UMC Next

I was a participant at the UMC Next event held in Kansas City on May 20-22, 2019. It was a gathering that brought together 10 members of each annual conference (around 600 United Methodists) to share testimonies, experiences, learnings, and considerations of paths forward for United Methodists who find LGBTQ exclusion to be unacceptable. I went as one of delegates from the greater northwest episcopal area. You can view the press release here. It was a closed event and I can’t offer specific quotes.

But what I can reflect on is that during the process of discernment, discussion, education about various plans and paths, the body generally debated three paths before us. Two have been poured (or are being poured) by the Powers-That-Be in the UMC. And one has been beaten through tireless (but now exhausted) efforts by LGBTQ inclusion advocates. It’s helpful to examine

1. The poured path of Disaffiliation

This is what they want to happen is progressives leave, and it doesn’t matter how much of their local and regional property they take with them. But the legislation doesn’t allow for it. As you’ll see in tomorrow’s post, this poured path is broken, not written in reality to facilitate the widespread exodus of progressive churches. It’s bad legislation, written outside of the committee process and without involving those who would use it.

2. The to-be-poured path of Dissolution

The poured path of Dissolution: ”End” the UMC. This path is not yet clear, but the Traditionalists are pouring it in tweets, blogs, and interviews with an odd fixation. In short, this path involves dissolving The United Methodist Church, liquidating its general church assets, and dividing them among the 2-3 branches that would come from it.

Recognizing that the UMC with its serpentine polity will take Traditionalists years or a decade to twist to their liking, the claim now is that we should dissolve The UMC, sell its joint assets, and set annual conferences or networks of churches free with their own property and some regional resources. Let each one go free, though losing much in the process.

3. The Beaten Path of Resistance

But there’s a path that the Traditionalists do not want progressives to take, the path that has been beaten down by those who will follow the Spirit’s call on their hearts and not the hard concrete of General Conference.

The beaten path of Resistance: ”Remain” in the UMC. This path is to continue to reject the Traditional Plan, to continue on the path we have been, and to show how the Traditional Plan is toothless and will only be implemented in a patchwork fashion. The numbers work even if it falls short of full inclusion, and the goal is to allow time and culture (just like the inclusion of women and African-American pastors) to shape the Traditionalists until they open up—or just elect less anti-gay leadership.

Beating a path takes time, following the trailblazers who sacrificed to lay it. It takes top-to-bottom agreement by a jurisdiction to create it, and so far only the Western Jurisdiction has done so. It is within reach by the North, but out of reach by the South. So while the Traditionalist Plan can harm the Resistance in the South, they cannot implement what they want in the North (given a few changes) and definitely not the West.

But the enthusiasm gap is vast: progressives have been in this conflict for a long time, and the exhaustion and the hope for something new drains the energy out of some of these efforts. And yet this is also the path with the easiest implementation: With a clear, compelling strategy of how this path will enliven something new, wedded with the resources and marketing savvy of the megachurches and moderates, and this path can be clear and effective. It will take LGBTQ advocates, progressives, Persons of Color, megachurch pastors, and moderates working together. It will be a fragile coalition, but one that United Methodism hasn’t seen before, and thus the possibilities are unknown.

What Path will work?

We took a few test votes at UMC Next and they were just as split as a usual General Conference vote, so the way forward is not as clear across The UMC as it might be in your local church. Our tables were diverse, helping each other see that “stay and fight” could work in some contexts but not others, and “let’s just walk away” has varied financial barriers across the connection.

The end result was better connections, better learnings about how to center LGBTQ persons and Persons of Color, and a grudging growth towards mutuality between LGBTQ advocates and moderate Megachurch pastors. The event had many failings and intentional or unintentional micro aggressions to LGBTQ persons, to which I lament.

I lament that not everyone was on the same page and we cannot put energy towards one path. But the Traditionalists have showed us they can walk on two paths at the same time. They have their own parallel denomination ready to go without The UMC—with all the books, revivals, women’s supplementary materials, seminaries, Missions, and fellowship that they would need—but they also walked the path of dominance within The UMC. So too can progressives walk several paths right now until one of them breaks open for us to more quickly and effectively achieve a more just expression of Methodism

For the coming months, I will follow the lead of LGBTQ persons, seeking guidance from those at the margins of United Methodism as to how to create a more just and inclusive denomination. I will also seek guidance from women and POC caucus groups who stand to lose significant gains made in a separation situation. And in the meantime, I’ll be providing information and analysis to support a variety of paths inside and outside United Methodism.