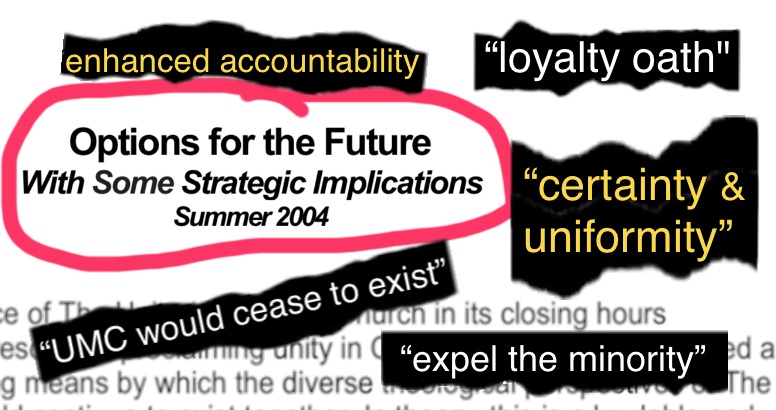 The conflict we are facing in The United Methodist Church right now is not an accident.  What is happening at General Conference 2019 is a culmination of a comprehensive blueprint to purge the UMC of “non-orthodox” views and those who hold them…a blueprint circulated in 2004.

We know this because the frameworks for the Traditional(ist) Plan, the Connectional Conference Plan, the formation of the Wesleyan Covenant Association, and even the dissolution of the denomination were all proposed in a document published for and discussed by the Good News Board of Directors in 2004. Fifteen years later, their efforts were successful: all their anticipated plans are on the threshold of being the future of The United Methodist Church today.

I encourage you to read the whole nine-page document for yourself (web version and PDF version – and here’s a permanent mirror if they get taken down).  It is titled “Options for the Future, with some Strategic Implications, Summer 2004.”  The authors are current and former Good News board members and staff Revs. Mark Dicken, Scott Field, Phil Granger, and Tom Lambrecht.  The authorship and contents are verified in this 2006 article.

The average United Methodist would likely be appalled at the secular hardball politics celebrated by this 5,000 word document—without a speck of biblical justification. Among the many offensive statements and tactics, here are a few of the most troubling:

The document could be dismissed as an extreme outlier from the past.  But its five plans are being carefully executed right now at General Conference 2019.

This also puts the opposition to any other plan (the One Church Plan and the Simple Plan) in a clearer context, as any unified church where everyone has a place at the table is antithetical to the narrow view of the church this document recommends.

Read on for a detailed comparison of the extreme views of this document and the extreme plans for a “new wineskin” now unfolding before the General Conference.

Forced Departure.  This is the drumbeat of increasingly exclusionary polity from General Conference 2008, 2012, and where we were headed in 2016.  But in 2016, the delegates voted to ask the Bishops to lead and the One Church Plan, supported by the Council of Bishops, has short-circuited this Plan…for now.

“The drawback of forced departure is that it creates a hostile environment within the church, whereby some are forced to fight against others to seek their exit or removal from the church.  One wonders whether the General Conference or any other group of United Methodists has the stomach for the extended battle that would be required to carry out this option. The 2004 General Conference refused to implement strengthened accountability language, choosing instead to ‘be nice.’ One also wonders what long-term impacts would remain on the church as a result of this hostile battling.  Would the victory be worth the cost?” p. 6

By choosing to create the Commission on A Way Forward, General Conference rejected this Plan in 2016. And if no plan passes in 2019, it would put us back on this path in 2020.

Heterogeneous Denomination.  This is the Connectional Conference Plan.  It is currently actively touted by Bishops Scott Jones and Gary Mueller and WCA member Chris Ritter.

“United Methodism would no longer stand for much of anything as a denomination” and “it would put evangelicals in the position of belonging to a group that would allow beliefs and behaviors that are antithetical to the Gospel.” P.6

The WCA has stated that they would leave the denomination anyway if the CCP passes for this exact reason.

High Expectation Covenant Community.  This is the Modified Traditional(ist) Plan. Numerous articles on it: 1, 2, 3, 4.

This is why they need the “gracious exit” provisions within the Modified Traditional Plan: they are removing the barriers to exit when they make “the environment of the church so hostile to the minority party that they choose to leave or to agree to amicable separation.”

Amicable Separation.  This is the plan to dissolve the United Methodist Church, presented by Keith Boyette, President of the WCA.  Incidentally, this is the only part of the document that mentions Central Conferences.

“Requirement that both sides agree, in order for it to be effective. One side can hold the other hostage by refusing to agree.  It would also require a high level of agreement by General Conference delegates, who tend to be institutional preservers and unlikely to easily come to such agreement.” P.8

Boyette’s petition for dissolution has recently been ruled “not in harmony” with the called General Conference, so this possibility cannot be considered until 2020 unless the 2019 delegates vote to revive it.

Voluntary Departure.  This is the Wesleyan Covenant Association serving as “a new formal network” for a new denomination.  It is dependent on the “Exit Provisions” that they are proposing at General Conference.

“It may require some congregations to leave their property behind (although one hopes a large enough critical mass of those departing could work around this problem).  It also leaves the United Methodist denomination somewhat intact, with the accumulation of resources to potentially continue for decades on a progressively revisionist track.” P. 8

This disadvantage helps explain the WCA’s President, Rev. Keith Boyette presenting legislation to the 2019 General Conference for the dissolution of the denomination.  The UMC is so offensive to this group that leaving is not enough, it must be destroyed.

This Good News document represents five different strategies to implement one clear vision: “certainty and uniformity within the UMC.” (P.5)  The authors believe that uniformity can be achieved only by separation.  We are, in other words, better off if we are separate than if we are together.

I do not share this view of the church.  I believe that the vast majority of United Methodists appreciate our historic “big tent” approach to faith.  I believe that the vision portrayed in this document represents the viewpoint of a very small faction within the denomination. Even if renewal group professed membership is quite large, I suspect their membership would be appalled at the actual use of such hardball power politics.

From my point of view, the single most offensive quote in the document is the one on expelling progressives through “making the environment of the church so hostile to the minority party that they choose to leave or agree to amicable separation.” As delegate Rev. Gregory Gross has articulated, such a directive contributes to the suicide, depression, substance abuse, and homeless rates among LGBTQI youth. The collateral damage from this strategy to make churches unwelcoming to LGBTQI youth and adults is just heartbreaking, and progressives’ acquiescence has unfortunately enabled this directive over and over.

There is a different path forward than division forced on all of us by this small group. We are better together.

By stark contrast, the only plan from the Commission not acceptable to this fifteen-year-effort is The One Church Plan, which offers a more traditional ecclesiology that declares we can all be one in Jesus Christ.  The One Church Plan is the opposite of what these groups want because it offers a Way Forward for all of us and not just for some, though it falls short for this blogger who supports the Simple Plan. But as the most openly supported option on the table, the One Church Plan interrupts and begins to heal the damage these groups are doing to the church.

Remember: All of this was just part of the plan.

Thanks for reading, commenting, and sharing on social media. Be sure to send it to your General Conference 2019 delegation.