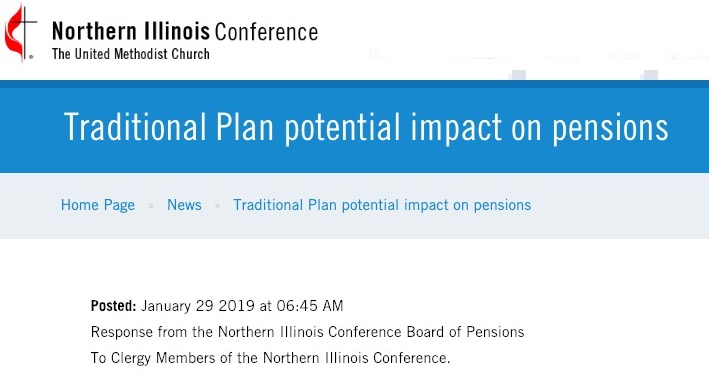 Two weeks ago, Hacking Christianity published the article “Wespath study reveals Traditionalist Plan cruelly targets Clergy Pensions” which examined the Traditionalist Plan’s uneven effect on our pensions. It was meant as a resource for General Conference delegates to see if they wanted to afflict clergy unequally, and for annual conferences to consider if they ing about withdrawing under its provisions.

Within an hour of the blog post, Traditionalist Plan supporters wrote that the analysis was not true. Calls were made to my annual conference staff, and to Wespath (the UMC pension and benefits agency) board members. Wespath tweeted “feeling misinformed?” graphics. A bishop’s staffer requested a delegate in the West lobby me to take the post down. Bishops and pension managers sent mass emails to their annual conferences telling people to only get their info from official sources—not blogs.

The flurry of activity and high-level pressure had a common theme: surely the Traditionalist Plan wasn’t that broken. Surely it couldn’t be that unfair to clergy lifetimes of service! And surely the analysis by the blog post was false, right? Right??

But now the truth of those claims has been independently verified.

The Northern Illinois Conference Board of Pensions, either independently or spurred on by the January blog post, decided to investigate further into the Traditionalist Plan legislation. As an annual conference board, they are obligated to look after the concerns of their conference clergy, who would bear the financial impact of these decisions.

Their report is written with plain language on a complex topic. a few quotes, but definitely read their blog post, especially as it explains how the unaddressed problem of inflation reduces the value of the clergy’s earned pension in an exited conference.

[A]s currently written, the traditional plan will freeze the accrual of benefits for the clergy of a separating annual conference; The UMC will not fund the inflation adjustments that dramatically change what clergypersons expect to receive in pension for the years already worked…

It is incorrect to claim that any outcome of General Conference 2019 “avoids disruption to clergy pensions.” Shifting pension liabilities between separate legal entities is disruptive. It is impossible to predict the capacity or the willingness of a separated annual conference to restore the accrual of benefits frozen by The UMC…

While everyone may have the best intentions, recasting the conference relationship to the denomination as the traditional plan provides will change the capacity of the conference to provide benefits. Under the traditional plan, when an annual conference leaves or is forced out, The UMC will freeze benefit accruals. No one should be guaranteeing that clergy will not experience any change when much of that outcome lies with decisions of a future conference with less capacity than the present one.

It’s important to note this is not an uneducated yahoo conference board: one member was a former Wespath rep to the General Conference that created the current clergy pension program. So their careful research is informed and super-helpful for other annual conferences considering how to connect with their clergy concerns.

The blog post two weeks ago apparently caused a lot of headaches for Wespath and conference pension officers. Some of it was due to the supporters of the Traditionalist Plan freaking out. And some of it was due to misreading the blog post’s claims. I apologize for any disruptions of people’s days as a result of the post.

Wespath responded with an expanded Frequently Asked Questions on A Way Forward which dealt directly with some of the questions raised by Hacking Christianity—in fact, they went from about 18 questions answered to over 40 questions answered inside of a few days.

Overall, Wespath does a good job answering questions brought up by the blog post and peripheral questions that the blog post didn’t ask. It’s great for annual conferences and clergy and laity to have a well-rounded resource created in just a few short days. Check it out!

Are the claims true?

So we now have these two resources. How do they handle the claims made in the original blog post about the way how the Traditionalist Plan unfairly handles clergy pensions?

Relevant Wespath FAQ entry: What if the Traditional Plan prevails and an entire annual conference does leave The United Methodist Church? What would happen to clergy benefits and annual conference liabilities?

…as currently written, the traditional plan will freeze the accrual of benefits for the clergy of a separating annual conference; The UMC will not fund the inflation adjustments that dramatically change what clergypersons expect to receive in pension for the years already worked.

Relevant Wespath FAQ entry: Is it true that if the Traditional Plan is approved, my pension will automatically be t?

To calculate the original $300,000 claim, we used a document from Wespath that was made for annual conferences who exited clergy before the Traditionalist Plan would take effect (ie. now). The document articulated that the gap between a clergyperson who turns in their credentials and a clergyperson who continued in United Methodism would be almost $300,000 in missed benefits and benefit improvements. While it is true now (and Wespath used it themselves for a 2019 delegation briefing), it wasn’t actually made for the post-GC possible scenarios, and there are some differences.

First, the document included HRA contributions as a benefit. But HRA contributions come from the Annual Conference and not the pensions and benefits office, so that’s $60k that shouldn’t be part of the equation. Thanks to Wespath executives for correcting this in an email exchange.

Second, to calculate benefit reductions, I asked for a one-to-one comparison tool and Wespath said there were too many variables to be able to offer one, so we don’t know the actual discrepancy. There is no way to know what an exited conference (now a new denomination) would do with the death benefits and other benefit improvements, as they would not be obligated to do anything The UMC is currently offering.

Indeed, their capacity to offer similar benefits as an entire denomination would be reduced. Relevant Pension Board quote:

Not all the money in the separated conference’s CRSP account will transition with that annual conference. The assets will be reduced by the costs of promises to clergy who decide to remain in The UMC and contingent annuitants by something like 170% of what a conference contributed (market rate vs. funding rate). Subtracting those amounts leaves fewer resources than originally contributed for the clergy who migrate with the separating annual conference.

Summary: We regret we were partially incorrect about the $300,000 number, as the only quantifiable gap is the $150,000 lack of benefit improvements in the example by Northern Illinois. But given the reductions in the ability/obligations of the exited conference, we continue to be confident that the gap would be higher than that estimate regarding the final real value of the pensions earned from 2007-2019, solely because of a conference being exited by the Traditionalist Plan.

Wespath, working within the constraints of the legislation (which was written outside of Commission on A Way Forward discernment–probably a source of a lot of its problems!), was unable to find a legal pathway to equal treatment, though they got closer than any mere mortals could.

The only conclusion left is that the Traditionalist Plan is fundamentally flawed.

I’m heartened that the blog has awakened many to the incredible unavoidable pitfalls of the Traditionalist Plan’s provision to exit annual conferences. And if you delete that provision entirely…then it just continues the UMC on the path we have been and will do nothing to change the status quo.

My hope is that General Conference delegates are more creative and seek the novelty of One Church Plan, Simple Plan, or the Connectional Conferences Plan as more viable, creative, and faithful ways forward.

Thanks for reading, commenting, and sharing on social media. And for sharing this article with those who originally disputed it.