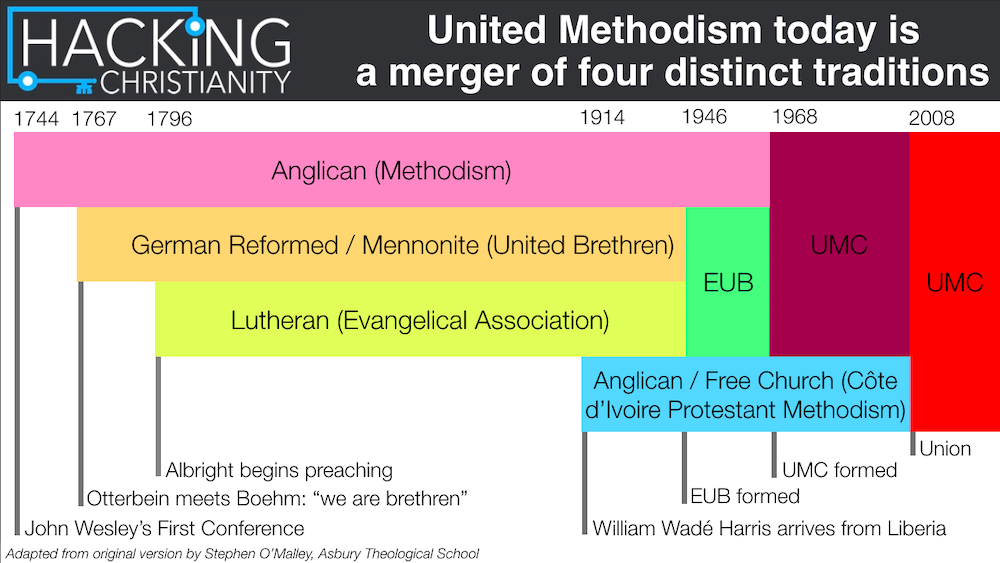 People like to say that United Methodism shouldn’t become a big tent church with a variety of beliefs under its roof. But we already are that big tent, and we wouldn’t be who we are without our diversity of traditions. Here they are and why they matter to our talk of “unity in diversity” now heading into the 2019 General Conference.

Navigating the Four Streams under One Methodist Bridge

The graphic above shows the four distinct historical traditions that define United Methodism at this point in our history. The four major streams are:

United Methodism today is a blending of these four distinct traditions, which come with mutual betterment from diversity, but also conflict from a lack of uniformity.

Merging the Streams – A Vast Difference

All four of these traditions are blended together in United Methodism today, but the way they were merged differs greatly.

First, the two mergers shown in the graphic above seem to be very different, although they were very similar in size and scope:

So two similar-sized mergers, but as articulated by United Methodist professor Dr. Darryl Stephens at a conference in July, the way we merged the similar-sized streams was very different:

We haven’t completed our 2008 merger work yet and the groaning in our polity reflects that. Indeed, the United Methodists in Côte d’Ivoire do not participate at the same level as the rest of the connection either, given that they were one of the few conferences to not report voting totals on the 2016 Constitutional Amendments.

There  varieties of traditions, and they were merged at two moments in our history in very different ways. We are still living into the last one and exist as a diverse church under one roof.

How do these traditions affect GC2019?

So how do these traditions relate to General Conference actions that included or excluded people groups? Mergers have in our past been intertwined with social movements and changes in our polity regarding classes of people. As fully articulated in 2012, it’s a mixed bag for women and minorities depending on the year:

What mergers haven’t done is helped us reach full inclusion for LGBTQ persons–in fact, they’ve made them worse.

As we live into the crossing of the streams and connect them to be better together, may we leave no one out of the flow of the Spirit from God to God’s church to the world.