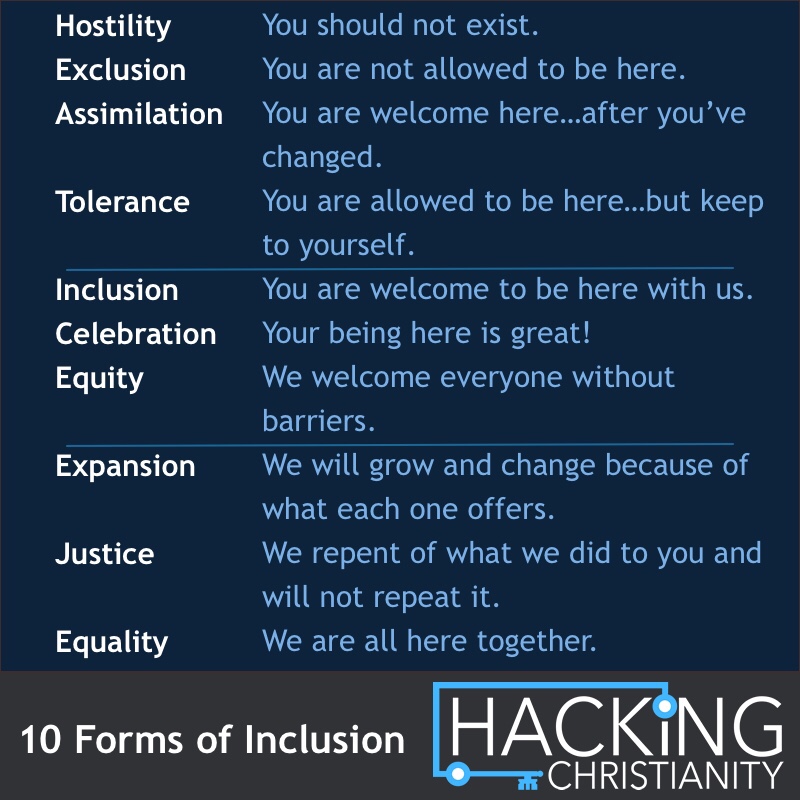 On Twitter in November 2018, Rabbi Danya Ruttenberg posted a tweet detailing the varieties of what inclusion looks like in her context. With acknowledgment to her inspiration, here’s an expansion of that tweet into the ten stages of inclusion, detailing the nuances between inclusion and exclusion.

Note: I am using the terms “dominant group” and “minority group” as general terms that can be applied to any people group or perspective group. Indeed, the better term is “minoritized populations” since people groups can be treated as minorities even if they are not actually the minority (they just don’t hold the keys that the dominant group does). These general terms are used with acknowledgement to their limitations.

The following details what each stage of the graphic means to the relationship between a dominant group and a minority group in the same context, community, or society.

Hostility – You should not exist.

Exclusion – You are not welcome here.

Tolerance – You are allowed to be here…but keep to yourself.

Inclusion – You are welcome to be here with us.

Celebration – Your being here is great!

Equity – We welcome everyone without barriers

Expansion – We will grow and change because of what each one offers.

Justice – We repent of what we did to you and will not repeat it.

Equality – We are all here together.

Many churches market themselves as “inclusive” of LGBTQ persons, but what does that mean?

As an example of the above 10 stages, the inclusion or exclusion of LGBTQ persons in Christian contexts can have many forms:

Just because itself as “inclusive” may not mean what you think it means.

Thanks for reading, commenting, and sharing this post on social media. You are appreciated!