Home/Reviews/We Pray With Her…and you should too. 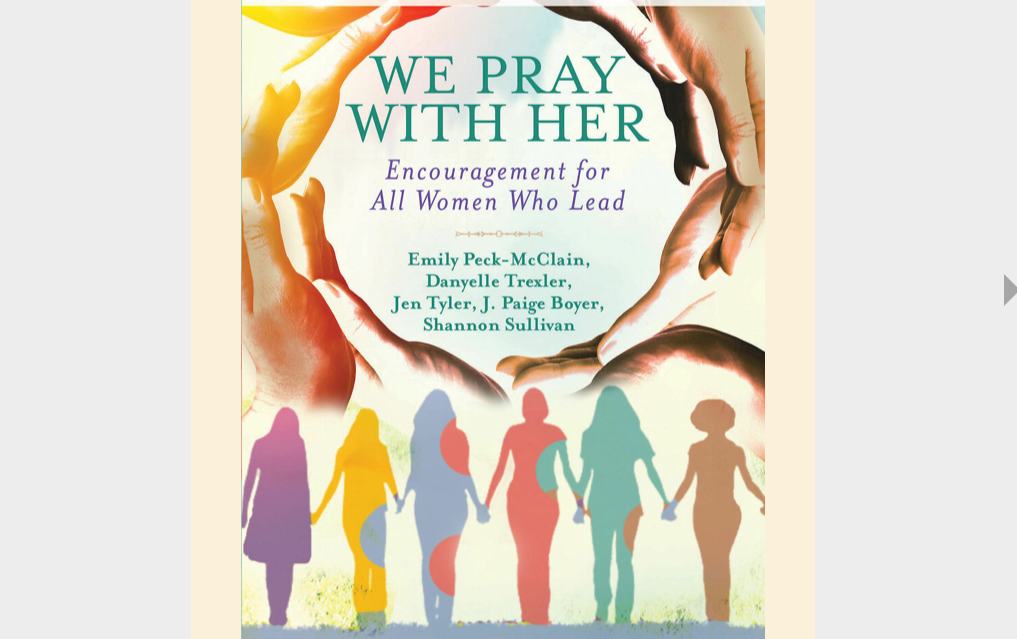 More Than a Year In the Making

Almost exactly a year ago, the clergywomen’s devotional book “Strong for a Moment Like This” was pulled from bookstores because the editor, a male clergyperson, had plagiarized some of HIS devotionals. In other words, the failures of a man overshadowed the valid contributions and inspirational voices of women who had worked on the devotional book.

A year later, the team effort is back as “We Pray With Her: Encouragement for All Women Who Lead,” with all-new 100 devotions and dozens of prayers for special occasions that you might not know you ever needed–but these clergywomen found they needed in their practice of ministry. The book is divided into five sections: CALL, STRUGGLE, COURAGE, RESISTANCE, and PERSISTENCE.

The focus is on encouragement for women, but as a male clergyperson, I am getting a lot out of it. And I get a kick out of getting to the byline of each devotional or prayer and recognizing a prominent clergywoman in my life. Six of them are fellow alumnae of Boston University School of Theology, in fact!

The following is a sample devotion provided as a sample by the publisher and with permission by the author.

Sample – The Authority to Disobey

The king of Egypt spoke to two Hebrew midwives named Shiphrah and Puah: “When you are helping the Hebrew women give birth and you see the baby being born, if it’s a boy, kill him . . .” Now the two midwives respected God so they didn’t obey the Egyptian king’s order. Instead, they let the baby boys live. —Exodus 1:15-17

Very few times in history or myth have midwives been on center stage, but here, in the book of Exodus, their courage becomes legendary. Shiphrah and Puah are brought before the king of all Egypt, which in and of itself must have been at least unnerving. His instructions to them indicate that the meeting was terrifying: two small women before a powerful, unstable, genocidal man. He wants them to kill for him—to kill babies for him. We don’t know how they responded the moment. But we do know that they had courage. Courage to disobey authority.

In some ways, the courage to disobey authority is lacking in those of us with privilege. Authority protects our privilege. Authority rewards me for being white and performing my gender in a way. If I were to courageously take a stand against authority, what privilege I have would be in jeopardy. But the thing is, sometimes authority is unstable and violent. The rewards I get with my privilege come at a heavy price. White pastors like me might find saying that “black lives matter” from the pulpit may get us fired. But two centuries of white churches refusing to speak out about racism has allowed the church’s prophetic voice to rot. Maybe you have found speaking out against authority to be dangerous as well. We look away from sexual harassment in the workplace, for instance, trying not to draw attention to ourselves. And yet, look at the sea change that has happened since some people have begun to speak out, regardless of the risk.

Shiphrah and Puah didn’t care about privilege. They didn’t care about authority. They cared about God. And so they courageously worked with God to bring life into the world. I wonder what it would look like if I embodied courage like theirs. What would it look like for you? What privileges do you need to risk? What authorities do you need to disobey?

Prayer: Spirit, breathe life into me—strong, courageous life, to help me stand up to authority and live into your vision of justice and peace. Amen.

The Rev. Shannon E. Sullivan serves Calvary United Methodist Church in Maryland as the associate pastor and is one of the contributing editors of We Pray with Her. She is a graduate of Drew Theological School.

The choice above of quoting the devotional on privilege matters because the book is predominantly white. Rev. Becca Girrell in New England remarks on her blog:

Like so many of the efforts of my sisters and I, there is room for improvement. A wise colleague pointed out that the editors and contributors are overwhelmingly white (and I suspect overwhelmingly straight and middle class). We– white, well-meaning, middle-class women– have to always be aware of feminism’s oppressive history with women of color. Too many (read: all?) of the “advances” feminism claims leave out or leave behind women who are not white, and often those who are not straight, not middle class, and so on.

“The System is Rigged” by Rev. Becca Girrell

I think that is a valid critique, but one that I think the book authors are aware of. As a parallel situation, I’m newly part of a “white clergy against racism” group to better educate and empower white clergy who have privilege and comfort in predominantly white spaces to speak against racism and empower minorities. One of the learnings I have already received is how often we expect persons of color to enter unsafe, unequal spaces and teach us how to do things better. Better perhaps is to ask “How can white clergy bring the conversation into our white spaces in ways that make them less unsafe and unequal for persons of color?”

So also with this book: a book of predominantly white women who fall short on representation but nonetheless bring conversations about privilege, class, gender, and struggle to audiences who may not read “I’m Still Here: Black Dignity in a World Made for Whiteness” by Austin Channing Brown. It’s a small thing, but I think that’s a win for the conversation that can lead to better representation down the road.

What Your Purchase Supports

Your purchase benefits more than yourself.”We Pray With Her” royalties benefit scholarships for clergywomen and there are ways to contribute beyond purchasing the book as well. What a great benefit to the personal benefits from reading this book!

Pick it up at your local bookstore, request it from them to be shipped to you directly, or purchase for Kindle or Cokesbury eBook.

Thanks for reading and supporting women in ministry! May you be inspired as I was.

Disclosure: None! I purchased the book myself, full price, and offer this review without being compensated by the author or publisher.

(Update: I didn’t realize the book content was entirely new and not reprinting from the earlier devotional. The second paragraph has been updated to show that accurately)