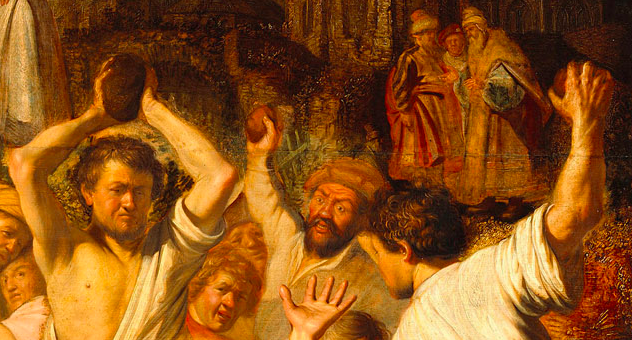 Dr. Christine Blasey Ford’s testimony and story about being sexually assaulted by Supreme Court nominee Judge Brett Kavanaugh is well known at this point, and as this post went to press, she is presenting her case to the Senate Judiciary Committee.

But seeing what she went through these past two weeks brought to mind a biblical character: Saint Stephen, the first Christian martyr.

But maybe not in the way you think…

The Hearing and the Mob

In the New Testament book of Acts, chapters 6-7, Stephen is the first person to die for telling the story of Jesus Christ. Stephen isn’t an Apostle. He wasn’t a Disciple. He didn’t know Jesus in person, except perhaps at a distance or in the crowd. He wasn’t A-Team, he wasn’t varsity.

But in the story of Jesus, Stephen found his calling to tell this story about Jesus. And he began to tell others about it, right up until his final speech in front of the religious authorities of his day. He got a bit sloppy at times, got some dates and places wrong in his stories, but his heart was in it.

Reading the text carefully, we see that Stephen was speaking up that day because of Fake News: false accusations planted by the religious authorities so that Stephen would be called on the carpet and accused. He had a choice: deny his experience, or tell it even more forcefully. He chose the latter, a long speech and he called the church’s leadership to accountability and conversion to Jesus Christ.

And they took him outside and stoned him to death, even as he finally saw with his own eyes an image of God incarnate.

Stephen suffered at the hands of Fake News, and was forced into an unjust hearing before his accusers, and was publicly harmed by a mob without a trial by the governing authorities (the Romans, who legally could execute Jesus, did not stone him: the religious authorities did).

The First to Speak Up

We want to believe we are better people than biblical times, that we embody different values, that we offer fair judgment to people’s stories and experiences of injustice, harm, defilement, and dehumanization.

But in many ways, we haven’t become much better:

The first people who complained about this priestly abuse or predatory male bosses were ostracized, disregarded, ran out of town, everything short of being stoned. Such experiences had a chilling effect in many cases, discouraging others from speaking up with their stories. Silence reigned, and abusers continued to be predators.

But today, such experiences are coming up thanks to brave victims and social media. Thanks to social media Hashtag #WhyIDidntReport, we see the systems and commonalities that kept these experiences from being talked about the moment. By people bravely sharing their experiences first, they may get treated like Stephen from scripture, but they may cause hundreds or thousands more to share their stories.

While I’m inclined to believe Dr. Ford’s story, we don’t know anything about the truth of Dr. Ford’s testimony and story. That’s the difference between Saint Stephen and Dr. Ford: We know that Stephen was telling the truth of the story of Jesus Christ (Okay, Christians believe that).

But we do know that the process surrounding both persons telling their story has frightening parallels, including the lengths that  were willing to go to make their truth known.

Like Stephen telling of his experience of Christ, the experiences that are shared first are always the most harshly treated. Stephen died for his story, but we hope for a better ending to Dr. Ford.

Not About a Judge

Stephen’s story was not held in a just manner by the powers-that-be frightened of what that story could mean. At risk in today’s political process is not the election of a judge that will outlaw abortion–that will happen regardless with this regime.

Instead, at risk is the legitimacy of women’s testimony. At risk is the consideration of stories of rape and sexual violence. At risk is the allowable lengths persons who speak against this regime will be stoned in public by the mob.

At risk is nothing less the basic building blocks of patriarchy, and if Dr. Ford’s story topples this process, then the powers become more vulnerable, and the victims of this regime become a lot more powerful. The judge is inevitable and will bring decades of harm. But the chipping away at patriarchy will echo into eternity.

Will this story be the moment? Or will the stones, the mob, and the scared Powers silence it yet again?