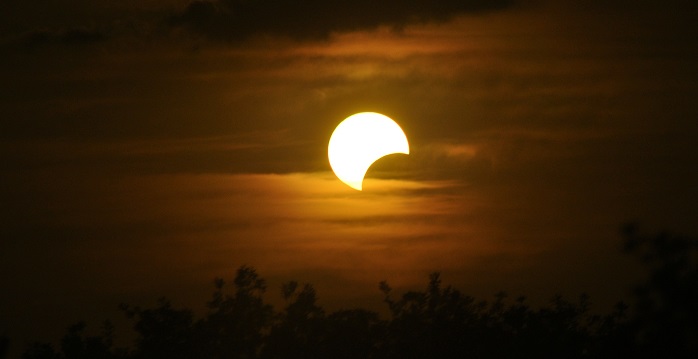 How a cosmic event helped address a biblical conundrum for me.

A full eclipse marched its way across the North American continent on August 21, 2017. While there were runs on purchases on solar glasses, gasoline, and camping spaces, Americans did not respond to the eclipse like people of the past.

In the past, eclipses were pondered not for how they happened. To ancient cultures, the eclipse meant something. More often than not, it meant the gods were displeased. Mesopotamian clay cuneiform tablets from around 2000  B.C.E said if there was a solar eclipse, the king would die. But CNN reports a fascinating story:

The eclipse meant something to the Athenians. But today we know what it is. We know how to predict it. We made it a touristy event in my part of the pacific northwest.

An eclipse is a perfect example of the triumph of human reason over superstition, fear and uncertainty. But knowledge is not the same as experience. And experiencing the eclipse revealed to me a way to better understand a troubling biblical passage.

Stopping the Sun in the Sky

In the Old Testament (Hebrew Bible) book of Joshua, there’s a story that I’ve never preached or taught on in my 12 years of ordained ministry. It’s not in the lectionary of assigned readings, it’s not in many popular children’s stories, and no Veggietales or Dreamworks films have been made about it.

I don’t understand why it isn’t more popular. It has everything. Joshua is fighting another tribe, actually five tribes who have turned against the Israelites. It is a tribal battle to end all battles. Then God throws down hail to smite an opposing army, and the climactic moment is when God stops the sun in the sky as a sign of God’s power and favor towards the Israelites. It’s seriously got more hyped up moments than a Michael Bay movie.

Until the eclipse revealed to me how.

The stopping of the sun in the sky in Joshua 10 goes like this:

On the day when the Lord gave the Amorites over to the Israelites, Joshua spoke to the Lord; and he said in the sight of Israel,

“Sun, stand still at Gibeon, and Moon, in the valley of Aijalon.”

And the sun stood still, and the moon stopped, until the nation took vengeance on their enemies. Is this not written in the Book of Jashar?

The sun stopped in mid-heaven, and did not hurry to set for about a whole day. There has been no day like it before or since, when the Lord heeded a human voice; for the Lord fought for Israel.

The passage looks different from this side of history. We know it’s not the Sun that was held in the sky. The sun does not move except in the swirl of the cosmos, rather, we know now that the earth moves around the Sun. So what technically happened in the Scripture is that the earth stopped spinning. And scientists believe we know what would happen if the earth stopped spinning: we would fly off the land mass, tectonic plates would crush, dogs and cats living together, mass hysteria and fiery death of everything.

And we are tempted to say the story in Scripture didn’t happen. That this biblical event was hyperbole or a tall tale that meant something to the people who shared it, but didn’t really happen.

On the one hand, as a Christian, I believe God is far more powerful than I can imagine, limited as I am in the finite/infinite divide. If I believe that, I can choose to believe that God could stop the earth from spinning, could keep us from flying off into oblivion, could do all those things. I can choose to make room in my theology for that, as inconvenient and impossible as it is.

But I can hold that theological affirmation in one hand even as I hold a scientific explanation in the other, born of personal experience.

The 2017 eclipse (I was in 93% coverage, not full totality) was a sunny day in Seattle, Washington. Two church staff and I went up to the roof of the church and even as others on other roofs were looking up at the sun, I was looking around us. The whole place turned slightly towards dusk, like the evening twilight. It got much colder all of the sudden. It happened quicker than I expected. I imagine a full total eclipse a few hundred miles away would have felt like a dusk, dark, then morning within a few minutes–then the sun shone brightly again.

It struck me that a total Eclipse looks like a day gone by in just a few minutes. That the stories handed down of Joshua’s triumph over the Amorites may have been true from a certain point of view: that a whole day did go by and the sun seemed to stand still when the five minute day was gone by in the heat of battle. When the battle lines opened up and it looked like the sun stayed put after the whole “day” then it would be disconcerting to everyone there.

Perhaps the Athenians scared stiff off the coast of Sicily teach us something about this battle. Maybe that’s how the Israelites won because their foe (the Amorites) believed the eclipse meant something but they had an absence of a story to fill with their uncertainty. Whereas Joshua already knew how to frame everything that happened as God’s action and was not deterred, filled the vacuum of uncertainty with authority, and his people won the day.

The Bible is such a rich text that multiple interpretations are always possible. Some forms of biblical apologetics are always trying to prove the Bible is factual and 100% accurate at all times. That’s not my purpose or belief; rather, it’s to give another option of how to interpret an incredible event found in Scripture that doesn’t mesh with science.

Like most things, how we interpret cosmic or unexpected events shape our stories moreso than what actually happened. Joshua’s story is still one of the awesome power of God who stands with God’s people–and no amount of explaining the science of the event will detract from that story. But giving an explanation of how the natural world is interpreted by the story of humanity allows us to bring wisdom to our relationship with the text–and with the God behind it all.