As promised, here’s my contribution to the conversation about #NextMethodism (see previous coverage here–includes a partial list of entries by others).

Drawing on the revelations during the same time period from Wisconsin and Mississippi, it seems clear that three things need to happen to the Clergy Covenant in whatever is next for United Methodism.

1. The Covenant Will Be More Local

When Wesley set up the small groups–Wesleyan bands, Class Meetings, and accountability groups–they weren’t people from neighboring states. They were neighbors, people you saw every day or week in your daily life. Accountability was to this small group and the nearby worshiping community. You knew them by name.

Today, accountability is such a faceless experience in United Methodism. Clergy from across Annual Conference lines can bring charges against one another, and clergy can even petition to remove laity from local church membership outside of their own conference.

For early Wesleyanism, he knew the class closest to you has authority and accountability. It’s not a far-off person who can best lay down judgment (unless it is John Wesley himself, haha), but the accountability and discipling community that has the most authority.

In whatever is Next for Methodism, the Covenant needs to get smaller before it can be effective across the Connection again. 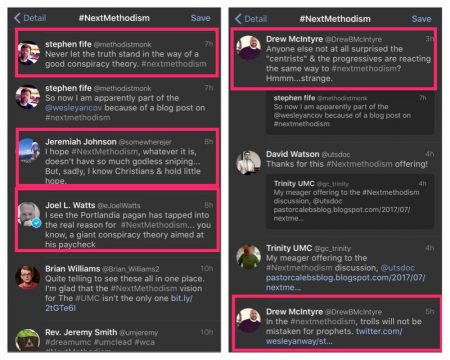 2. The Covenant Will Be More Direct

“If another member of the church sins against you, go and point out the fault when the two of you are alone. If the member listens to you, you have regained that one. But if you are not listened to, take one or two others along with you next time, so that every word may be confirmed by the evidence of two or three witnesses.” Matthew 18, NRSV

The #NextMethodism post earlier this week played out in real time one of the critical problems with the clergy covenant: the indirect nature of the complaint process is really problematic.

As a case study, when I posted about the #NextMethodism, adding to the conversation online, I linked to all the participants by name so they knew the conversation was happening. But an odd thing happened:

But overall, it was worth it. The indirect subtweeting culture of this particular segment of online Methodism revealed a greater truth: perceived violations to the Clergy Covenant need to be initially dealt with directly, not indirectly. At present, perceived violations go to one’s supervisor (Bishop) without any communication to the targeted clergy. For example, the Rev. Anna Blaedel had her 2016 charges handwritten on a sheet of paper a few tables over from where she sat and turned in to her supervisors.

The next iteration of the Clergy Covenant will require people who have difficulties with one another to address them directly (face to face, or at least via personal correspondence) before they advance to the complaint stage with an indirect superior. Complainants would be required to show how they attempted their complaint directly rather than being sent directly to a superior (though exceptions would need to be made in the case of sexual assault or child endangerment and other emergency situations).

In whatever is Next for Methodism, the Covenant will be stronger when we are required to discuss things like adults–face to face, or at least directly–and perhaps our online behavior will evolve as well.

3. Covenant Will Be Better Practiced

Finally, one of the learnings from Wisconsin and Mississippi is that the Covenant statement to uphold the Discipline requires participation in the practices of the Church, not just assent to its prescribed beliefs. The Covenant is active, not passive.

In both Wisconsin and Mississippi, they found that their clergy were not practicing the Covenant and their relationships were strained. Big churches didn’t rub shoulders with small churches, and churches that became less and less Methodist did so without proper correction from their peers. In both cases, exhortations were made to better know and watch over one another between scandals, not just during one.

I think their articulation of the Covenant as a practice and not merely a set of beliefs is important. It matches my own experience:

In whatever is Next for Methodism, clergy of all-sizes-of-churches will need to attend district meetings, uphold as much of the Discipline as possible, and commit to being “watched over” before they watch over one another and issue complaints in the mail.

“It might be brave to leave church, but it is braver to rebuild church in a way that is going to be a church of solidarity, a church of justice, a church of personal nurture, a church where fidelity to relationships and to covenant is being nurtured.” ~Ched Myers

I hope this was a helpful contribution. My hope is that as we discern what is Next for United Methodism (and like the quote, I do hope for an incremental approach rather than the repeal-and-replace approach) that we consider the ways how our own clergy covenant has fallen short.

These are easy corrections to the Clergy Covenant to make it more intimate, more local, and more effective in transforming one another into a common character of Methodists.