Home/Uncategorized/The WJ Case for Bishop Oliveto – No Such Law 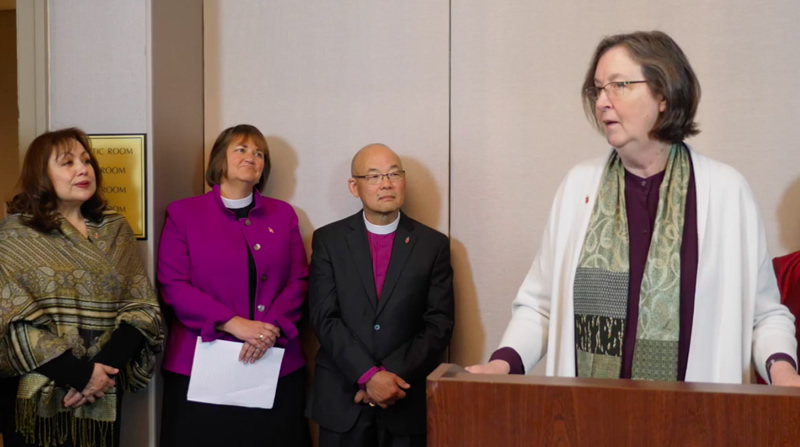 The Request for Declaratory Decision argues that current Church law per se disqualifies an elder in good standing from being nominated, elected, consecrated or assigned as a bishop. Because of this per se disqualification, the acts of nomination, election, consecration  assignment violated, negated and ignored Church law.

The primary provision cited to is the “one man/one woman” language in ¶161B of the Social Principles.

“Marriage – We affirm the sanctity of the marriage covenant that is expressed in love, mutual support, personal commitment, and shared fidelity between a man and a woman . . . We support laws in civil society that define marriage as the union of one man and one woman

By its plain language, Paragraph 161B “affirms” and “supports”. An “affirmation” is not an edict. It does not prohibit or mandate action. Similarly, an expression of “support” neither prohibits or mandates action. This language says that the Church only recognizes and blesses heterosexual marriages. It does not say or imply that any other form of marriage is unlawful or illegal.

Indeed, in our Social Principles at ¶162J, we say:

“Equal Rights Regardless of Sexual Orientation – Certain basic human rights and civil liberties are due all persons. We are committed to supporting those rights and liberties for all persons regardless of sexual orientation. We see a clear issue of simple justice in protecting the rightful claims where people have shared material resources . . . and other such lawful claims typically attendant to contractual relationships that involve shared contributions, responsibilities and liabilities, and equal protection before the law.”

If this Council treats ¶161B as “law”, the Council is in effect legislating law where the General Conference has not legislated law.

I’m fully aware of the position some of you took in your Dissent to JCD 1254 (2013). I offer the following. The Social Principle involved in that case concerned Human Sexuality under ¶161F, not marriage under ¶161B. You found mandatory language in ¶161F that does not exist in ¶161B. Further, the matter in question in JCD 1254 concerned a resolution of an annual conference pursuant to which others affected by the resolution might conform their conduct. Here, we have as the challenged “acts”, the nomination, election, consecration and  assignment of a bishop. Not the legislation of an annual or jurisdictional conference.

Next, the “one man/one woman” language was added to the Social Principles in 1972:

“B) Marriage – We assert the sanctity of the marriagae covenant. Marriage between a man and a woman has long been blessed by God and recognized by society. We do not recommend marriage between two persons of the same sex.”

Lack of Ability to Charge

Next, this Council has held in JCD 542 (1984) that the language of “fidelity in marriage/celibacy in singleness”, standing alone, does not preclude the ordination or appointment of a self-avowed practicing homosexual. This holding recognizes that language of prohibition and banning must be specific, not general. To the point, and not by implication.

The fact of the matter is that the only prohibitory language involving same-sex marriages in the Discipline concerns clergy conducting such ceremonies, or such ceremonies being performed in a United Methodist church.

Finally, Decision 1185 did not reach the question of whether ¶161B outlaws or bans same-sex marriage. It only found that the General Conference acted within its authority by defining marriage as limited to the union of one man and one woman. As Susan Henry-Crowe said in her Concurring Opinion,

“The Judicial Council, in making this decision, is not commenting on the appropriateness of the disciplinary language related to marriage being between one man and one woman. We only say that there is no constitutional block to such language.” (Joined in by Katherine Austin Mahle, F. Belton Joyner and Angela Brown.)

Here, we are not asking the Church’s blessing on a same-sex marriage. We are only saying that there is no law against civil same-sex marriage in the Discipline. Without such a law to violate, neither the WJ Conference nor the WJ College of Bishops negated, violated or ignored Church law when electing, consecrating and assigning an elder in good standing who was married to a same-sex partner.

Here, we do not have a legislative act. We have the nomination, election, consecration and assignment of a person whose qualifications are challenged by the Request for Declaratory Decision. Bishop Oliveto’s election does not mandate or proscribe any action by others. It is not a “call to action” by others to disobey any provision of the Discipline. Her election has no prescriptive force on others whatsoever. The Discipline remains intact. Bishop Oliveto remains subject to any law providing for process against her. In short, the nomination, election, consecration and assignment do not negate, ignore or violate any Church law.

The acts of the WJ Conference and College of Bishops in electing, consecrating and assigning Bishop Karen Oliveto as bishop did not violate, negate or ignore Church law because there is no Church law barring an elder in good standing from entering into a same-sex civil marriage.

As set forth in our Opening and Reply Briefs, the Way Forward Commission is considering the human sexuality issues raised by the SCJ’s Request For Declaratory Decision. As well, based on recent reports from the Commission of a “looser connection”, it is fair to state that the Commission is also considering the structure and order of the Church, specifically as I have argued the exclusive and autonomous nature of jurisdictional and central conference episcopal elections. We should not, you should not, interfere with the Commission’s work. We should not, you should not, make the Commission’s work more difficult by creating new  standards for episcopal elections, or expand the definition of “practicing”, or define the Church’s position on the legality under the Church’s eyes of same-sex marriages.