Home/United Methodist Church/Schism/The #UMC may be hollowed out, but new life is possible 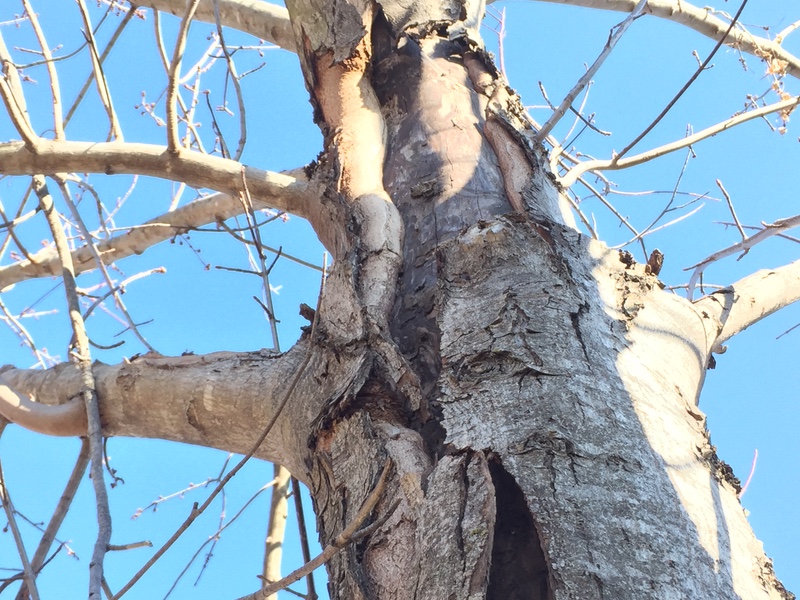 How a rural Oklahoma tree tells a tale for United Methodism. 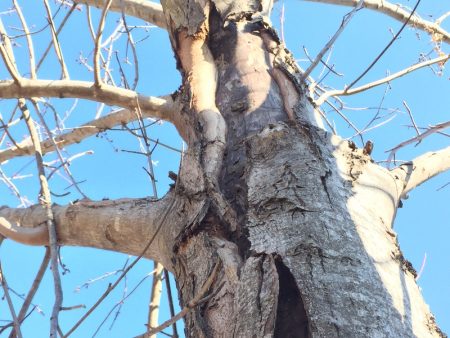 After Christmas 2015, I visited my family in Oklahoma. At the time, my parents had an acre-sized backyard where they raised chickens and bees and vegetables. The backyard tree cover was different every trip due to storms, high winds, or freezes.

On this trip, my dad showed me the Rocky Tree, as I affectionately called it, as it survived a lightning strike several years before. You can see in the above picture where the strike traveled from top to bottom, shredding off bark and frying the tree from the inside out.

But the tree kept on living and growing, and over the years, a new trunk layer grew over the dead inner trunk, even growing new branches. The tree kept providing shade for the various backyard animals, and stood as a witness to Nature’s tenacity in a part of the country that is cruel to any tree that tries to loom large.

There’s a word for this that I recently learned from a clergy colleague in Portland: stilted tree. A stilted tree is a tree that grows in or around a dead tree. Usually they are found growing in the middle of a dead tree trunk, but in cases like the Rocky Tree, the new growth will eventually cover the dead trunk and it will continue to grow strong.

A Series of Lightning Strikes

I share that story because I believe God is not done with the United Methodist Church. Even if we’ve lost so much of what was once the alpha religion of America, there’s more ahead for us.

We’ve been struck by lightning so many times. For decades after the Evangelical United Brethren Church and the Methodist Episcopal Church merged in 1968, folks have said we lost our way:

Over the years, the pilings-on continued as it seemed like we couldn’t get any of our own Wesleyan Quadrilateral quite right.

In recent weeks, it seems The United Methodist Church cannot hold onto its extremes.

And those are only the stories I can link to: I have dozens of friends who have left The UMC (across the spectrum) because it failed them in some way, or they can no longer serve it with integrity–or are not allowed to serve it without divorcing their spouse first.

And I sometimes ask myself “why am I here, anyway, too?” 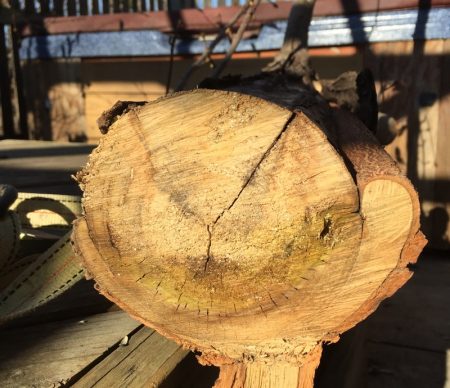 Frazzled, but not knocked out.

The Rocky Tree lost two large limbs in a storm just before I visited. One of the limbs was a lightning-struck one, and the other was a healthy one from the new growth.

Helping my father carry the two limbs to the woodpile, he told me to weigh them. I lifted them both (they were the same size), and the lightning-struck one was much lighter! He said the dead wood was lighter and weaker, whereas the living wood was stronger and heavier. Normally, a lightning-struck tree doesn’t survive the weakened inner core–but the Rocky Tree used the dead wood as a base for a new, stronger tree to mold to and grow on. You can see the new growth on the bottom half of the above picture.

That’s the tricky thing with stilted trees, especially ones growing in tree stumps.

It’s a wonder they succeed at all with those forces allayed against them.

“The United Methodist connection has always been a challenge to maintain. To meet and make decisions in conference requires deep commitment, energy and attention. To assign pastors where they are most needed and best able to serve is exceedingly complex. To worship and serve as a congregation means continually swimming against the tide of American privatism and consumerism.” (Thomas Frank, Polity and Practice, 319)

The lightning strikes have weakened us. Trying to be a Big Tent Church has taken its toll in the polarized, tribal church of today. United Methodism isn’t as strong as it needs to be to navigate the storms surrounding it.

Today, a mighty storm called Schism threatens to topple The UMC entirely, believing that splitting the Church Solomon-style would save the living tree (“my side”) from the dead tree (“the other side”).

Even as you read this article, the Wesleyan Covenant Association lays the groundwork for this process towards schism or takeover, hoping to topple the stilted tree before it is strong enough to stand on its own.

It’ll be a wonder if all the effort to reform and adapt Methodism–as has happened before–will possibly result in a more just church.

But still I stay

I stay because I have myriad privileges to use for good. I stay because I believe even the dead archaic dinosaur bones of an institution can become the framework of something more equitable, more just, and more ready for the world around us. We’ve done it before and we can do it again.

And I stay because, as a progressive who was homegrown and ordained in the conservative Bible Belt, I know we are better together.

My hope is that one day the Rocky Tree is completely covered with the new growth, the dead segment known only after counting the rings in the future. The tree-rings of the tumultuous 2010s joining the harsh tree-rings of the 1860s, 1950s, and 1960s. Like the past legitimization of slaves, and exclusion of women and African-Americans, the exclusion of LGBTQ people will also be reduced to a ring in our history.

My hope is that God continues to do amazing things through the United Methodist Church, and that leaders recognize that like a stilted tree, even a dead sect can bring forth new life. We would not be a resurrection people if we didn’t believe in that possibility and seek to make it possible.