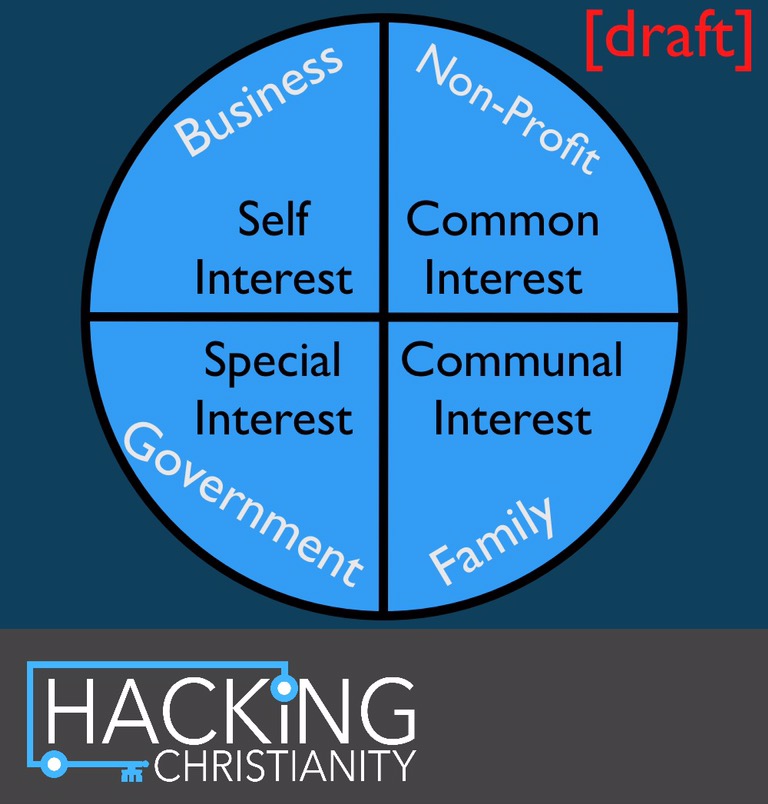 A draft version of a concept to better understand the Church’s role in American society.

Most everyone in America participates in these four areas of society: family, business, government, and non-profit/church. It is therefore important to name what is the primary driver of these varied mainstays of societies.

Businesses focus on self-interest. The purpose of a business is to turn a profit and provide income for one’s household. While many decisions involve other interests, the primary one is always self: does this make my business or place of work better for me financially? Whether it’s a front yard lemonade stand or a Fortune 500 company, decisions are weighted primarily towards self-interest.

Families focus on communal interest. Families (of one or more) seek their own self-interest, to be sure, but their primary concern is to make the physical areas where they exist better, such as supporting local business, participating in the PTA, requesting government services, picking up litter, or attending a church that makes a neighborhood impact. The community and physical area around a family home is of primary concern to families, even beyond self-interest.

Non-profits (church) focus on common interests. The gap between a government beholden to special interests and businesses focused on self interests is filled by non-profits and religious organizations. These entities connect needs with means across communal lines. While non-profits are often ran with best business practices, their interest is beyond the self or even community–often it is towards the entire ecosystem. NGOs and churches (particularly mainline denominations) that span continents have the strongest stated positions on economics and ethics due to their varied perspective and experience.

While there’s certainly examples of families acting in self-interest or businesses helping the common good, the default mode of these four institutions is usually as stated above, for better or for worse.

This may form a baseline of thinking for future work, so I’m putting it out in draft form to elicit corrections or thoughts about it. Take a few minutes to put a reply below and let me know what you think!