You are here: Home / Church Talk / christianization / The Jesus Fish and the Problem of Christian Labor

The Jesus Fish might be turning away more people than we think not only from church, but from products and services as well. 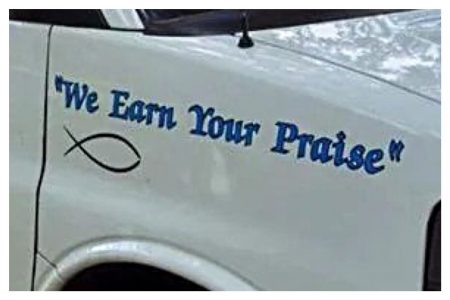 In Genesis 6, God says to Noah “Build an ark.” And the project must have these dimensions, this many cubits, this many of each animal on board, this many levels, and more. Building an ark is a lot of work!

But then in Genesis 6:17, God says (paraphrased): “For my part, I will bring the flood.” And what a part it was to flood the earth in this story! To match a massive project, God does God’s part too. It’s a story of judgment, yes, but also what faithfulness looks like: You do your part, I’ll do my part.

Fortunately for Noah, he did his part and created a worthy product to save humanity from the sea. Every cubit was done correctly, and the door was in the right place.

Unfortunately for the rest of us, contemporary Christians does not often continue with this commitment to craftsmanship and work that reflects our relationship with God. 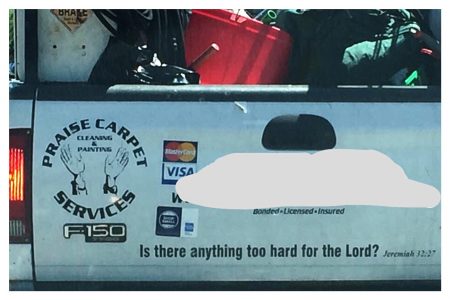 A pastor friend of mine was given several bids for a construction project at his church. I asked him what his criteria was for who he chose. He said “I know in the first 30 seconds whether I would consider them or not.”

I asked if it was the handshake or the first question or the format of the paperwork. “No, none of that.” Then what?

He said “All I have to do is look at their business card or truck. If there’s a Jesus fish on it, or other Christian symbols in your face, then they have a higher hill to climb.”

The pastor had long experience with Christian workmanship being less than adequate. Workers would be late and say that church ran late. And when work wasn’t done right, workers would say “Ah, it’s close enough for the Kingdom, right?”

So repeated experiences caused the pastor to not hire anyone who wore their Christianity on their sleeve. If they were Christian, but did good work or had a good reputation? Sure, no problem. But repeated failures dressed up as Christian camaraderie sours people against the Jesus Fish.

Beyond workers to manufacturers

“Just because they got Jesus doesn’t mean they got taste.” Rapture Ready by Daniel Radosh.

In addition, Christian manufacturing has left a lot to be desired over the years. Since the 1980s “boom” years of the Christian Industrial Complex, companies have been churning out products with Crosses and Christian labels on them like there’s no tomorrow. Some are parody items like T-shirts that christianize popular brands and slogans–that’s not my taste, but it’s fine. But moreso, marketers take ordinary sub-quality objects, slap Christian symbols on them, and sell them in Christian-centric stores.

A friend who worked at the Christian resource store Cokesbury relates his everyday dread:

“The worst I saw was Pumpkin Prayer materials. This awful prayer that you were supposed to do when cutting out a Christian design on your pumpkin at Halloween. It sucked. It said to scoop out the gunk on the inside of the pumpkin just like Jesus scoops out the bad stuff inside of us. It was supposed to be a “witness” at Halloween. I refused to put it out.

Shoddy baking dishes with “Bread of Life” written on the inside. All manner of coffee cups with scripture verses on them. Every time I opened a box it was more coffee mugs. I’ve seen “Christian” nail files. Seriously. As if I can’t get a decent pedicure unless the nail file has a cross on it.”

As Hank Hill says in this episode of King of the Hill when Bobby joins a terrible metal band because they are Christian: “can’t you see you aren’t making Christianity better, you are just making rock’n’roll worse?” Christians often make worse versions of things and yet it is accepted “because it’s Christian.”

How much better would we be if we moved beyond the kitschy to the quality? Then if people saw the brand, they would associate it with quality product rather than quality messaging.

Make good shoes, not Christian ones

The apocryphal story* goes that a cobbler (shoemaker) went to his pastor and asked what he needed to do to make God happy. The reply:

The maid who sweeps her kitchen is doing the will of God just as much as the monk who prays–not because she may sing a Christian hymn as she sweeps but because God loves clean floors.

Likewise, a Christian shoemaker does his Christian duty not by putting little crosses on the shoes, but by making good shoes, because God is interested in good craftsmanship.”

As American culture creeps towards Post-Christendom, we would be better served by focusing on quality craftsmanship, discipleship, and ways of making our products and our people better. We cannot rely on culture to prop us up anymore and give excuses for shoddy market-driven products. Rather, we are called to be more.

Like the Great Commission at the end of Matthew states “Go, make disciples of all the nations” means that we are called to make quality disciples, not reactionary converts. May our craftsmanship of products and people reflect the strength and faithfulness of our relationship with God today.

* Original attributed to Martin Luther, but no evidence supports this authorship. Earliest source of this story is Our Daily Bread in Guideposts Magazine, 1994.