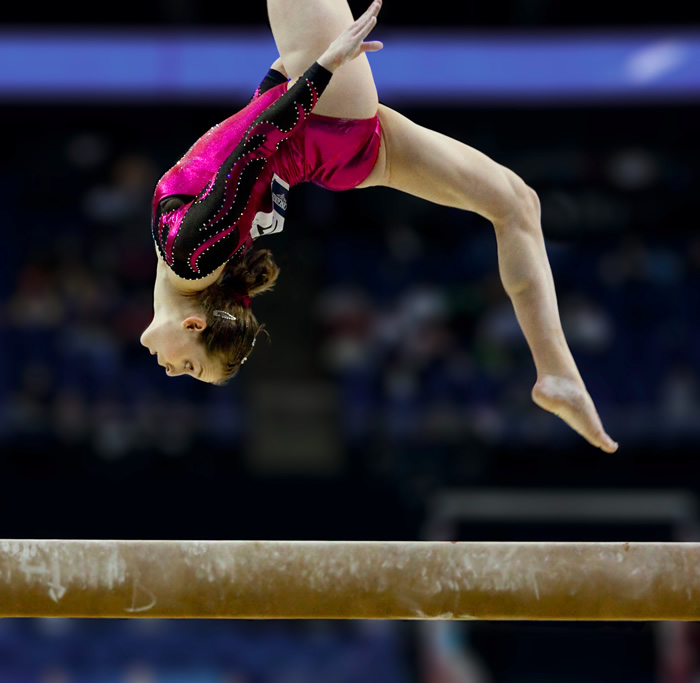 The Olympics are over but the journey to bring forth an Olympic spirit of focused intent has only just begun.

Like most of the world, we had Olympic fever in our house, and my three year old daughter loved watching the women’s Gymnastics (she called them “ballerinas” which speaks to their grace, I think).

There were many moments to celebrate: the diversity of the USA women’s gymnastics team, the absolute domination by Simone Biles on every event, and the emotional final poses by the amazing women.

But the video moment that I felt most inspired by was on the all-around team event, there was an end-of-the-beam shot watching Gabby Douglas do a flip on the balance beam. It was in slow motion and you see that she is 100% focused on the beam the entire flip. While the rest of her body makes a 360 degree motion, her focus is on the beam for almost 280 degrees of that jump, turning her head at only the last second and with frightening speed to revert her vision back to the beam.

It was fascinating to watch Douglas focus so intently on the unyielding block of wood that would either grant her balance and another attempt at a point, or would sit in silent judgment as she fell off of it.

Douglas’s focus on the beam makes me think about what we focus on in the local church. Focus is a huge part of ministry, especially in a local church setting, in at least three ways:

But equally consequential is what happens when a lack of focus takes place.

Focus helps avoid the drift, but too narrow a focus misses out on opportunities to grow the vision.

Called to be Superhuman? Or just super-focused?

Churches–small and medium-sized–often believe that they are simply unable to attain the goals they want because of location, lack of resources, and other factors. But I believe most of them simply need to cultivate the ability to focus like an Olympian.

The joke is that it would be nice to see an average swimmer swimming in the last lane so that we could see how absolutely dominant Katie Ledecky is in the pool and how far behind the average swimmer really is. It’s funny because we are tempted to see the Olympians as unattainable, untouchable exemplars of particular human abilities…at least for a time.

We do the same outside of the Olympics as well. When David Bowie and Prince died, they were named as irreplaceable. When Muhammed Ali died, he died as the Greatest and no boxer will ever surpass his infamy. We are tempted to say these were nearly Platonic ideals of people who we could never be.

But I believe Prince, Bowie, Ali, Biles, Douglas, Ledecky, and other exemplars of humanity are not exceptions – they are any of us that chose to focus and commit far beyond what the average human expects themselves to be able to do.

A friend wrote on Facebook about how we are to best engage exemplars of humanity in this way:

“[The Olympians,] Prince, and Bowie are not aliens or exceptions. They are us, fearless…They are simply a version of us if we were brave enough to to believe in ourselves. Brave enough to follow our hearts (and our heads) and be someone unique and individual. We *can* be like them.”

The superpower of these exemplars of humanity comes not from their genetics, the hours of practice each day, the nutrition, the drive and determination…all those stem from an ability to focus on what matters to them.

And that means that any congregation that focuses as well as they can also has to potential to achieve Olympic heights, no matter their size, location, or context.

I hope the ending of the Olympics brings a sense of encouragement to you instead of a sense of “well, that’s impossible.”

It takes focus. It takes relentless, pounding focus to overcome the diffusion of talent, ability, vision, and wasted time that is the norm in church culture. But since Olympians come from anywhere and everywhere on the international stage, so can the next great revival and revitalization or simply a transformed life come…from wherever you are.