You are here: Home / UMC / Schism / Non-Violent Resistance leads to hope, not schism, for the #UMC

Sometimes news articles are like a choir rehearsal. Whenever an article describing acts of non-violent resistance in The United Methodist Church is released, like a conductor raising their baton, a chorus of the same argument bursts forth online: “you are schismatic.” Those who disobey the Discipline in favor of the Bible (or their other covenants) are depicted as wanting to split the church in half.

Schism is a topic this blog takes very seriously (1,2,3,4, and dozens more on this link), but non-violent resistance like the Biblical Obedience and other movements do not advocate schism. On the contrary, they are rooted in a deep love for God’s people named Methodists and a heartfelt desire for the Church to be more inclusive, not less.

Dr. Dorothee Benz offers below a clear refutation of this argument, as well as informed commentary on how General Conference can choose to respond. 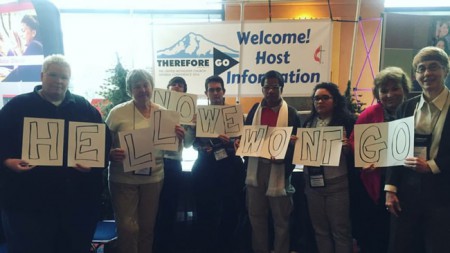 A Primer on LGBTQI non-violent resistance

Earlier this week, a group of 15 LGBTQI clergy in the New York Annual Conference came out via an “open letter to the people of the United Methodist Church.” Critics on the right responded by asserting that they were “pushing for schism,” moving the UMC “a step closer to schism,” etc. A similar reaction met the news of April 23, when Bishop Melvin Talbert and Rev. Val Rosenquist officiated at the wedding of two of Rosenquist’s parishioners, Jim Wilborne and John Romano – followed by the filing of formal complaints against Rev. Rosenquist. In March, when the NYAC Board of Ordained Ministry voted to give “equal consideration and protection in the candidacy process” to LGBTQI candidates, it was “NY Conference secedes from #umc.”

I could go on, but you get the point. (The quotes, all from Twitter, are illustrative rather than comprehensive.)

Much of this response is about the strategy of painting progressives, and particularly LGBTQI people and our allies, as the causes of strife in the church. This is a “blame the victim” tactic, and as I’ve said elsewhere, it turns the problem in the UMC on its head: the problem is homophobia, not homosexuality, and the actual cause of the strife is the church’s stubborn insistence on discrimination. We are no more to blame for this crisis than Black people were to blame for the conflict over the church’s decision to create the segregated Central Jurisdiction. It is the church that is responsible for the current crisis because of its decision to discriminate; it is not the fault of the people it is discriminating against.

But beyond its strategic value in the narrative struggle over who is responsible for strife in the church, the claim that ecclesial disobedience proponents are seeking schism fundamentally misunderstands both the purpose and the motivation behind ecclesial disobedience. And for those who are genuinely interested in understanding this movement, I want to offer some exposition.

The movement of ecclesial disobedience in the UMC – “Biblical obedience,” as Bishop Talbert has named it in an effort to underscore its faithfulness to the Gospel call to radical hospitality – is first and foremost a response of conscience. “One has a moral responsibility to disobey unjust laws,” as Rev. Dr. Martin Luther King Jr. reminded us. Since we believe that discriminatory laws are unjust, we are compelled to refuse further complicity in the UMC’s systemic discrimination against LGBTQI people.

Second, ecclesial disobedience is a form of non-violent resistance and non-violent resistance is a spiritual practice as well as a strategy of resistance. It is rooted in the belief that oppression cannot be defeated with the methods of oppression but rather only with the methods of love. It understands that all systems require the cooperation of the people in them and that our cooperation can always be withdrawn; and it asserts that when we withdraw our cooperation non-violently, we make possible an alternative. “The ends are predetermined in the means,” as King put it. (This is a clumsy summary and necessarily too compressed – books and books have been written on the subject, far more persuasively. Indeed, the study of non-violent resistance is the formative force in my spiritual, moral, and political development.)

Third, it follows from this that non-violent resistance is a practice grounded also in hope, because if its practitioners did not believe that the withdrawal of their cooperation could effect change, they would not undertake it. Thus, non-violent resistance is built on the conviction that all human beings are redeemable. As a strategy, it is therefore quintessentially one of reform or transformation. It is not an exit strategy. Those of us practicing and urging ecclesial disobedience in the UMC do so precisely because we (still) (somehow) believe that the church can change and we love our church enough to invest in the only strategy that we believe can change it at this point (for my views on the impossibility of changing the UMC through prescribed institutional channels, see this for the two-minute version and read here for the 2,000-word version).

We are not “pushing for schism” and we are not “seceding.” In response to the General Conference’s profoundly tone-deaf slogan “Therefore Go,” not to mention suggestions from people like Bishop Scott Jones that if we don’t like the rules, we should just leave, we have said over and over: Hell no, we won’t go

It is true that while our refusal to be complicit in the church’s requirement to discriminate is not designed to split the church, it is obviously surfacing tensions – and that is a good thing. Borrowing again from King:

“We who engage in nonviolent direct action are not the creators of tension. We merely bring to the surface the hidden tension that is already alive. We bring it out in the open where it can be seen and dealt with.”

Which brings me to me final comment on the subject of ecclesial disobedience and schism: The prioritization of church unity over justice, the accusations of who is “schismatic” versus who is loyal, the desire to hold the church together at all costs – all these prioritize the institution over the people of the church. And if, instead of asking, “will this lead to schism?” we asked, “What would Jesus do?” we might yet become a church that makes disciples of Jesus Christ for the transformation of the world.

Dorothee Benz is a lifelong Methodist and a delegate to the 2016 General Conference. She is a founding member of Methodists in New Directions and serves as its national representative. Follow her on Twitter @DrBenz3.