Home/United Methodist Church/Hoping to be Mary, Expecting to be Thomas 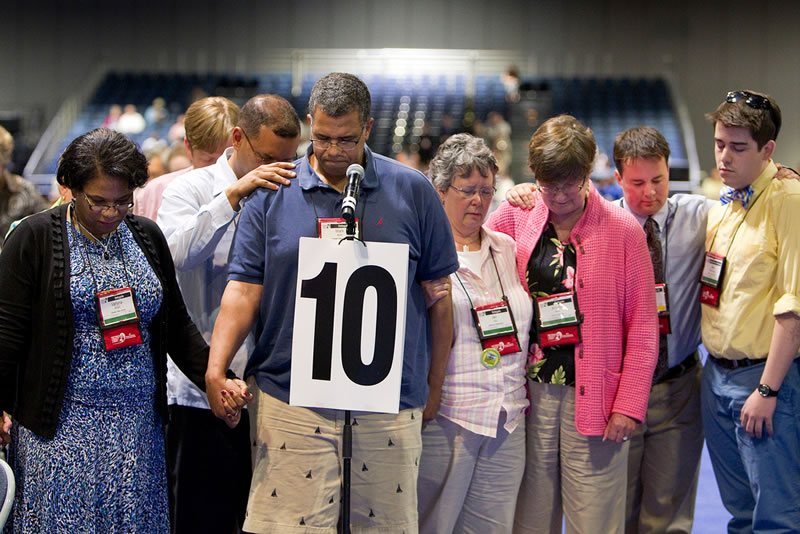 What will you preach on May 22, the Sunday after General Conference?

Mary Magdalene left and announced to the disciples, “I’ve seen the Lord.” Then she told them what he said to her.

I want to be like Mary Magdalene on Sunday, May 22, the day after General Conference of The United Methodist Church.

I want to be Mary Magdalene.

I want to tell of the Resurrection of the Church that I’ve just seen.

But Settling for Thomas…

Thomas, one of the Twelve, wasn’t with the disciples when Jesus came. The other disciples told him, “We’ve seen the Lord!” But he replied, “Unless I see the nail marks in his hands, put my finger in the wounds left by the nails, and put my hand into his side, I won’t believe.”

After eight days his disciples were again in a house and Thomas was with them. Even though the doors were locked, Jesus entered and stood among them. He said, “Peace be with you.” Then he said to Thomas, “Put your finger here. Look at my hands. Put your hand into my side. No more disbelief. Believe!” Thomas responded to Jesus, “My Lord and my God!”

Because, you see, Jesus didn’t appear to Thomas at first or for those first seven days.
Jesus came to Mary because he knew she would recognize Him and believe Him.
Mary saw the Resurrection. And believed.

I’m afraid we want to be Thomas.

I want Mary to burst through the doors and proclaim the Good News.

But I’m afraid we’ll settle for Thomas, waiting seven more days, or four more years, for the Resurrection to be fully revealed, and the current paralyzing doubt to be melted away.

The truth is both Mary and Thomas will be present at the closing gavel of General Conference on May 20.

That both/and is the Methodist way of incrementalism.

The resurrection new life for women preachers waited 30 years from first light in 1924 to the full dawn of equal gender rights to ordination in 1956. African-Americans waited 30 years for full inclusion as well in 1968. And 44 years later, LGBTQ preachers are still waiting, waiting for the Thomases to stop doubting and to start believing.

But I want a full Resurrection now.

I know in my head that we are called to be like the Disciples who sat with Thomas for seven days, waiting for the Resurrection to be made real to him. And if they had to wait forty-four years, I believe they would have. Because to watch the Resurrection sunrise together? That’s the best moment to wait for.

But in my heart? I want that moment to be this year, in this place, for my Church.