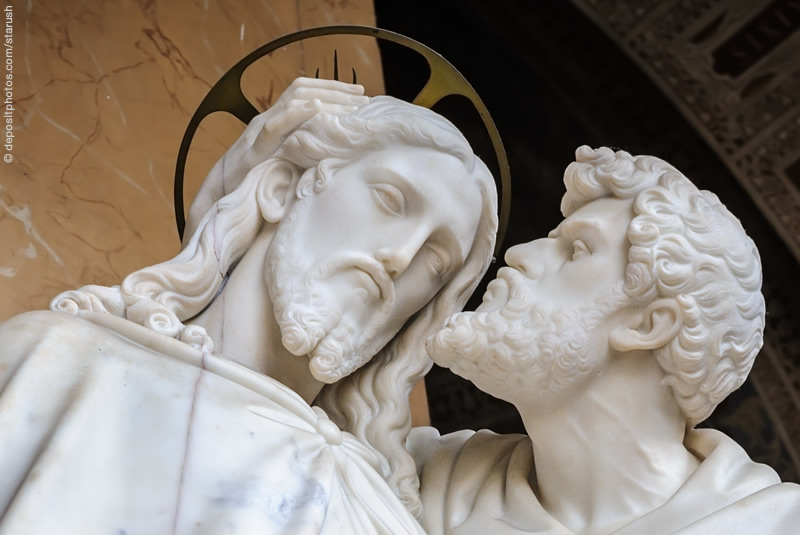 If it seems unlikely that Judas betrayed Jesus because of money or evil possession, could he have been turned by a simple story? 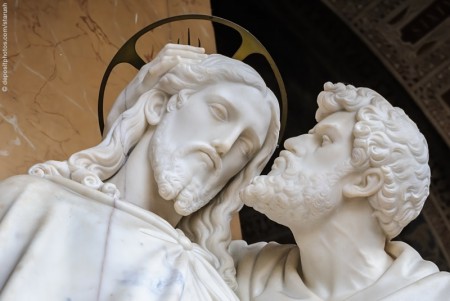 I’ve always been troubled by the depiction of Judas gets in the Gospels. Every Gospel treats him differently. Matthew and Mark write that Judas was motivated by gold and greed, whereas Luke and John say that Satan tricked Judas or took over Judas. John includes a line where Jesus tells Judas to go and betray him. Judas even dies differently. In Matthew, Judas hangs himself in shame, while in Acts, Judas trips in the field he bought with his blood money and injures himself in a way only suitable for the TV show The Walking Dead.

But each time I read Judas, I can’t get past the passage in Luke 22.

Let’s examine the story narratively, taking the story as true to see what it is trying to say. Judas is minding his own business, and then “Satan enters into him.” Yet Judas doesn’t appear to become like the demon-possessed folks elsewhere in Scripture. Judas kept his sensibilities. So we aren’t talking about a possession where Satan overpowers Judas’ facilities.

No, I think the story makes the most sense if Judas “turned” whereby he willingly followed what Satan said. Satan convinced Judas to turn against the most powerful and wonderful person on earth, whose miracles Judas saw with his own eyes, whose wisdom Judas knew intimately. What could Satan have possibly said to Judas to turn him in the face of that proven power and authority?

Our clue is that Judas was Jewish. He participated in the Passover meal, along with all the other Disciples who were all Jewish. Judas, more than likely, grew up going to the synagogue and hearing the stories of the faith, especially the stories of the patriarch of Judaism: Abraham. Abraham and Sarai were wicked old and God blessed them with Isaac, their only son, and God said their descendants starting with Isaac would be the chosen people.

Judas would have heard the most dramatic story of Abraham over and over. You may know it in Genesis 22. God told Abraham to take Isaac up to the top of a mountain and sacrifice him. Abraham took Isaac up the mountain, tied him to a sacrificial pyre, and had a knife in his hand when God intervened and stopped him. Isaac lived, and Abraham was rewarded for his faith by becoming the patriarch of the Chosen People of God.

Judas knew this story, had to know it in his bones, and be able to recite it word for word.

Peter Rollins, an Irish theologian, writes that story of Abraham and Judas are not just similar, but a re-enactment that went tragically awry. From The Fidelity of Betrayal:

“It is said that Abraham acted with absolute fidelity to the call of God; that despite his deep love for Isaac and his sense of correct ethical conduct, Abraham was prepared to follow the dictum of God regardless of the consequences. Although Abraham loved his son and believed that he was to be the arch through which his descendents would enter into the world, Abraham obeyed God and resolved in his heart to commit the murder.

Upon reading the stories of Abraham and Judas, we are confronted with the fact that both individuals are divinely chosen for a murderous task: they are both required to sacrifice one to whom they are intimately related.”

Judas thought he knew how that story would work out. Jesus would save himself when the Romans took him into custody. He would reveal himself as the warrior king, the Messiah, and the Empire would be vanquished. Judas would have proven his worth as Abraham did, willing to sacrifice their one hope. Judas would have been the most faithful disciple there ever was. I wonder if that was the story ringing in his ears.

Except that didn’t happen. Later from this passage and in readings during Holy Week, we know that Judas brought the soldiers to Jesus’ camp, but instead of a dramatic reveal that overcame the empire with shock and awe, Jesus would be arrested, crucified, and killed, the disciples scattered and afraid. Little wonder Judas would take his own life in Matthew’s Gospel. Jesus wasn’t who he thought he was. The one who Judas loved was gone.

Judas got the story wrong.

Judas was not meant to be the Second Abraham. Instead, Jesus was meant to be the Second Adam. The First Adam was made of the dirt, and even though he sinned, God loved the one he made with dirt. The Second Adam, now, He one who would make things right, who would track dirt into the all-too-clean temples, past the whitewashed tombs of the Pharisees, and connect humanity with God directly again. Rather than a second story of a favored family made anew, it was a new story of the entire human condition made anew.

The Second Abraham was a failure.

The Second Adam was not.

I get this Judas. I don’t get the one who was controlled by Satan, or even gave up Jesus for some silver. Those don’t make sense to me. But a human who fell into the trap of mistaking others’ voices for the voice of God? That I get. I also get caught up in a story that is not my own. We all do.

So often we betray our own lives by living into stories that are not our own. We believe we are supposed to be all things to all people: the superparent, partner, and breadwinner who does everything in 25 hours a day. The one whose talent will take them to the highest levels of prestige. And when we don’t make the list, we don’t get the promotion, when our children don’t respond the way we expected, and when our beloved seems ever more distant, we wonder what went wrong. We can get so wrapped up in our own stories that we forget who we are.

Author Brian Doyle, editor of Portland Magazine at the University of Portland, said recently at a retreat I attended:

Humility is the final frontier. You spend all your life building a persona, and the rest chipping away at it. Lots of people get lost in the selves they build and are desperate to get out.

How many of us are lost in the selves we’ve created, the stories that we listen to that are not true, and want desperately to get out? How tragic is it that Judas got so lost in his image of Jesus that he couldn’t see the real one?

Rollins writes a haunting note in The Fidelity of Betrayal that I hope strikes you as much as it did me:

One difference between [Abraham and Judas] is of course that Abraham receives Isaac back, while Judas fails to receive Jesus back. But surely this is because Judas commits suicide before such an encounter can take place. Could reconciliation have happened had Judas not taken his own life and met the resurrected Jesus?”

We see that maybe the Second Abraham and the Second Adam both existed at that moment. Judas failed the test by, probably, 24 hours. If Judas had lived long enough to see the Resurrection, would he have been venerated? Forgiven?

And I can’t help but wonder how strong Abraham would have been if his knife hand was unhindered and struck true. Would he have responded like Judas when his dream was crushed, when his story didn’t match reality, and when he was unable to get out of the swirling darkness?

Maybe we are all living out the twin stories of Abraham and Judas, both discerning God’s still-small voice amidst the chaos, terrified at every moment that we’ll mistake it and live a story that isn’t ours.

That’s a lesson of Judas that I can take to heart.