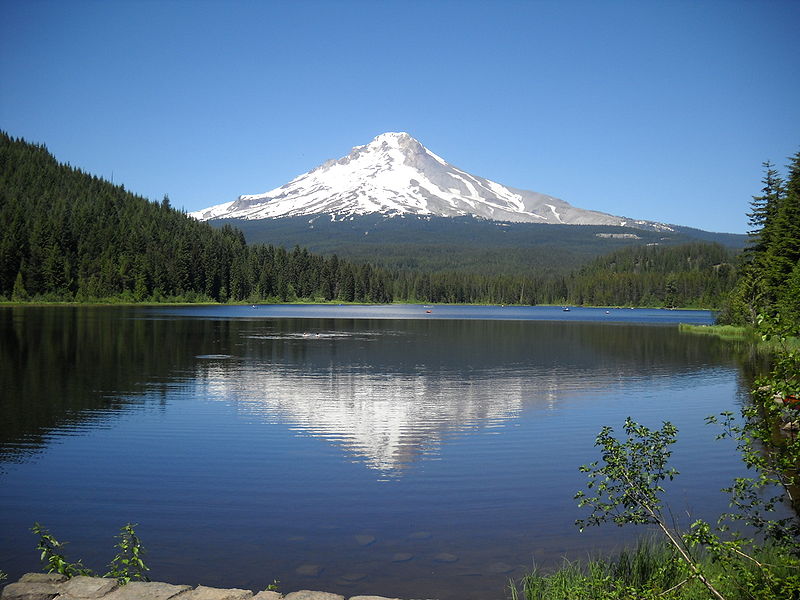 The common interfaith image of “God as a mountain with many paths” needs some tweaking to make more theological sense.

God as Lake and Mountain

Growing up in Oklahoma, one night at youth group we talked about whether all religions go to heaven or just Christians. A friend used the metaphor of “God as a Lake” which all the forest animals came to drink. They all drank in different ways. The duck would swim in the water, the doe would keep standing and bend her neck to drink, the dog would lay down and lap up the water, and the cat would summon a butler to put the water on a saucer and pillow. Even though each animal drank in a different way, they all experienced God through the lake. Therefore, through this metaphor, God is known through many religions, not just one.

Likewise, in seminary, I encountered the “God as a Mountain” metaphor: All religions climb up a mountain in different ways. The Methodists will be methodical in their approach, the Episcopalians will stop at every turn for a reading from the Book of Common Prayer, the Muslims will have to carry their prayer rugs for their daily prayers, and so on. Each climbs the mountain in their own way, their own tradition, and when they get to the top, they see that all the other religions have gotten there too. Through this metaphor, God is known through many religions, not just one.

I remember being inspired by both of these images back then, but looking back, they no longer have the power for me anymore. They were too clean, without any theology around if any religions did not lead to God, or why any particular religion was better than others. For people who believe God might save more than one religions’ followers, what can we do to make this metaphor better?

It helps to get our heads wrapped around the varieties of theology around this question. I’ve used this chart many times (originally here), but it is helpful to reflect on it again as we consider what metaphor for God works best in interfaith conversations.

The graphic above is a primer on soteriology. A “primer” means a short introduction. “Soteriology” is the study of salvation: Who is saved? Who is left out? How does one become “saved?” While it is tempting to say that the chart is from “fewest saved” to “most saved” or concentric circles of salvation, to me the chart is more about a spectrum of certainty.

While not inclusive of all positions, it is helpful to articulate the differences between the many beliefs about who God saves and who has their religions’ idea of eternity.

Considering this chart, we can tweak the image above of “God as Mountain” by making it reflect what climbing a mountain is actually like, and bettering the theology in the process.

In Eric Elnes’ 2006 book The Phoenix Affirmations, Eric spent time with Christians in India who were living in a way that preserved the integrity of both Indian culture and Christian tenets of faith. One of the spiritual directors likened the variety of religions to climbing up a mountain–but with a twist from our example above: Each tradition has discovered a unique route for reaching the top. While they are climbing the mountain, the traditions cannot necessarily see each other through the brush and the angle of the mountain.

By envisioning it this way, it helps clarify the limits of our human knowledge. Individuals within the climbing parties may not even be aware that others are ascending the mountain. They think they alone are making the climb, and may be surprised when they reach the top and find more people there.

I find this tweak to redeem the metaphor of “God as Mountain” for two reasons.

First, it helps us value diversity without minimizing it. Progressives tend to see all faiths as basically the same when they really aren’t.  As former Bishop of Durham NT Wright says in his book Surprised By Hope:

“There is a world of difference between the Orthodox Jew who believes that all the righteous will be raised to new individual bodily life in the resurrection and the Buddhist who hopes after death to disappear like a drop in the ocean, losing one’s own identity in the great nameless and formless Beyond.”

The image of climbing a mountain gives integrity to other paths without challenging our own. It also allows for other paths to not reach the top as their paths didn’t quite make it.

Second, it doesn’t lessen the value, life, death, and resurrection of Jesus Christ or our evangelistic call to share Christ’s story. Christ is the climber who went up the mountain before us and has come down to show us the way. As Christians, we have a promise and a gift offered to us. If we are on this journey on our side of the mountain, great, we follow it. And if we meet fellow climbers who don’t seem to be on their own trail, we show them a better way.

And it won’t be until we reach the top, following Jesus on his own time, until we know if ours was the only way, or it there are more people to celebrate our journey with.

I found this to be a helpful tweak of an image I’ve carried around for a long time. Thoughts?

How does the metaphor work for you or fail for you?

Discuss. Thanks for your comments and shares!

Portions of the above post are found in this 2014 sermon here.