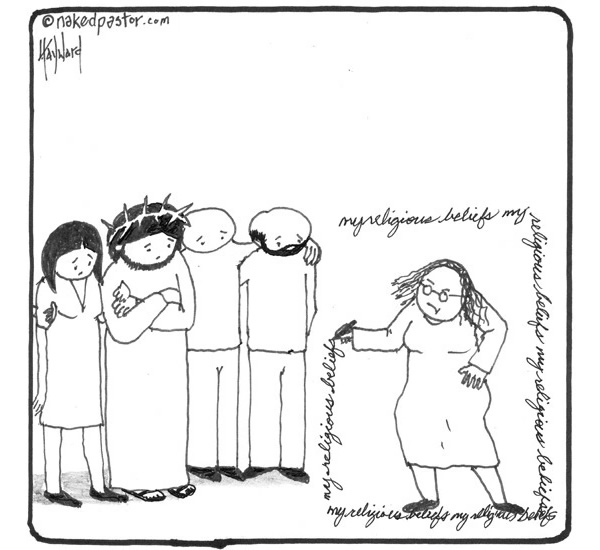 The process of Christian conversion provides a predictable framework for Kim Davis’ actions–and that framework is more commonplace than you think.

I’m frankly annoyed to write about Kim Davis, the most recent Christian to cash in on the backlash to marriage equality. From pizza parlors to Oregon bakers, my religion seems to reward those who stand up for their beliefs in ways that discriminate against people. It’s a cycle that won’t stop anytime soon.

Further, it was revealed that Davis has been married four times and bore children out of wedlock–both actions one would think does more harm to fundamentalist ideas of Christian marriage than two men marrying. But then it all makes sense when we read this:

“It’s a matter of fact that she’s been married multiple times.” Staver says “it’s not really relevant, it’s something that happened in her past” and that her conversion to Christianity about four years ago wiped her slate clean. “It’s something that’s not relevant to the issue at hand,” he says. “She was 180 degrees changed.” (source)

Davis, an Apostolic Christian, says her commitment to her faith came after she found “a message of grace” four years ago when she went to church following the death of her mother-in-law.

“I am not perfect. No one is,” she said in her statement. “But I am forgiven and I love my Lord and must be obedient to Him and to the Word of God.”

The process of Christian conversion provides a predictable framework for her actions–and that framework is more commonplace than you think.

The Joy of Converts

Saul was a Pharisee and prosecutor of the early Christians. He was traveling down the road one day and God struck him blind and revealed to him that Jesus Christ was to be followed, not denounced. Saul became Paul and he used his educated Greek and Hebrew background (as a Pharisee) to become the most widely known follower of Christ in history, thanks to his letters and his zeal to spread the Gospel.

From the first convert to the way of Jesus Christ on to today, we see that conversion from an old way of life to a new way of life is often very dramatic. This helps lift up people out of the cycles of death they are a part of, and turn them towards a new path. Thanks be to God!

The Problem of Converts

Conversion is a great and necessary component to Christianity. However, the way how humans use their conversion story or experience after the event is of great concern when it comes to their power over others.

The first problem with converts is that they consider their previous life to be wholly other to who they are now that they identify with the way of Jesus Christ. Saul became Paul, and likewise, most converts consider their previous lives to be “wholly other.” I ran an online forum for interfaith conversation for 5 years, and whenever a newcomer came on very strong with bible passages and anti-progressive comments, I would usually say “I bet that’s a Catholic convert.” I was usually right–and they usually argued against aspects of their previous life. One Methodist blogger was well known for denying hell existed–but after a conversion experience in therapy, he’s now outspoken against any progressive thought. When someone converts, the old life is wholly other, and all aspects of it must be opposed, lest the person backslide to what they were.

In short, you may have eternity, but that doesn’t excuse you arbitrarily forcing public policy to reflect that experience.

Conversion is often a messy process that involves tedious times for the convert and their relationships. Most converts do well and adjust thanks to friends and mentoring. But a sizable few use their roles in public or ecclesial life to:

Given these two, it is of little wonder that “of course” Kim Davis would deny the same-gender couple marriage, and want for them to convert to Jesus instead. Further, it’s understandable that Davis sees no conflict between her old way of life and her current beliefs–that’s a garment tossed aside, an old wineskin, and no longer has any relevance to Davis. It’s wholly consistent with conversion narratives and lived beliefs, most of which don’t get in the news.

I don’t know anything about Kim Davis’ conversion story. But I do know that when converts live their new life in ways that become harmful to others, it is problematic.

I think one key responsibility of those who mentor people through conversion experiences (including pastors like myself) is to emphasize how personal this experience is. God didn’t strike down everyone on the road–just a few people like Saul. Paul didn’t force people to walk the same road that he did, either literally or figuratively; instead, he guided hundreds or thousands in different methods. Instead of a perfect method that slayed death, it’s a billion individual paths of the limitless Spirit.

So when it comes time for us to help others convert or seek a new path, we cannot force our experience or rail against the “old me” we see in others. To do so is to create a psychological break from the past that bifurcates their life into before-and-after, causing everything before to be anathema. We who help people have a responsibility to help the convert properly frame their old life and their new life, especially when it comes to paying forward the experience to others.

This is key because when we have power over people, we cannot force our converted religious beliefs on them because they haven’t walked the personal experience God is preparing for them. We can set the stage, we can be a mindful presence, but we cannot dictate how and when the Spirit will appear as an echo of our stories.

My hope is that all those who use their power in church or society to force others to subscribe to their religious beliefs see that their efforts are not for conversion’s sake–they are abuses of power in ways unbecoming of who the new Christians are called to be.