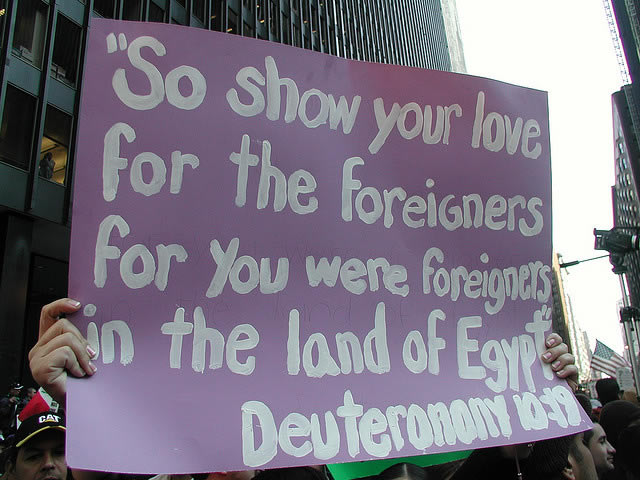 A guest post today from a student at Ohio Wesleyan University, a United Methodist-affiliated school.

Christ and the Immigrant

Once again, the issue of illegal immigration has been catapulted into the center of the national dialogue, providing fodder for presidential hopefuls and reminding us that the social issues that affect individuals around the world still exist when we’ve stopped paying attention to them.

As this discussion has evolved, the platform among some candidates has not been if they are going to take action against these 11 million individuals, but instead how and to what extent they are going to punish them for residing in the United States. We are told that they are dangerous, that because they came into the United States without the proper documentation or by the proper means, that they are a part of the caste of society we have labeled criminal, a term that is vague in its meaning but certain in its consequence. These accusations and calls to arms have played upon our national subconscious fear of the “other.”

However, before we react in fear, as Christians, we must first take a step back and carefully ponder the effects of decisions made out of fear, and how we can act with Christ-like love.

Heart of the Fear

The heart of the fear of immigrants is based around the idea that they have come in order to take something from us or have come to harm us. Of course, these perspectives are false. If we are to understand that all things come from God, then it is not morally correct for us to take claim ownership over the things that we are fearful of immigrants taking. Being born on the wrong side of an imaginary geo-political boundary does not determine the worth of an individual or their right to pursue a better life for themselves or their family.

Furthermore, if we fear an entire group of people just because they have come to the country illegally, we cannot claim that we view them as made in the image of God and blessed with free will. To be defined as a criminal does not mean that a person is dangerous and it does not mean that they are amoral.

Not only is there no teaching in the New Testament that supports mistreatment or hatred of undocumented immigrants, but evidence would suggest that we are to act to the contrary. The parable of the Good Samaritan speaks power to many truths, among them the reality that national origin and tribal rivalry does not define the ethicality of a person. Matthew 25:35 has Christ stating that, “I was a stranger and you welcomed me. . . (NRSV).” This is taken out of a broader context that reinforces this sentiment. Our treatment of immigrants in this country, illegal or otherwise, is directly reflective of how we would treat Jesus Christ, the homeless Jew who was feared and hated by the political powers and religious establishment.

Argument out of Fear

A common argument against granting citizenship for illegal immigrants follows this logic: “If we allow an easy path to citizenship for undocumented aliens, doesn’t this just spit in the face of people who took years to do it the right way?” This is utterly ludicrous. The difficulty of the immigration process by the proper channels is not reflective of the wrongness of granting citizenship to illegal immigrants, it is reflective of the brokenness of our immigration system as a whole.

Ignoring this, there is a parable that speaks volumes about this issue. In Matthew 20 we find the parable of the Laborers in the Vineyard. In this, an owner of a vineyard goes out in search of people to work for him. He finds a group in the morning, and at noon, and in the evening, just before work is out. At the end of the day, he pays each of the groups a day’s wages. This is met by chagrin from the first group, but the owner challenges them, saying that he has not cheated them, and they cannot be mad at him for being generous. An act of generosity for some is not an act of cruelty to others.

As we continue to prayerfully reflect how we will speak about immigrants and what actions we will take, we must analyze the heart of the matter. The issue is not really about the 11 million illegal immigrants in that they pose a threat. It is based in the fact that we as a nation and a culture have the desire to believe that we are inherently superior to other human beings because we are citizens of the U.S.A., particularly if we are the ones in power.

If we are to be a Christian nation, as so many of us claim, then we must extend the hospitality and love displayed by Christ to the poor, the downtrodden, the hungry, and the homeless. We must give sight to the blind and set the captive free. Speaking and fighting along with these 11 million targeted children of God is one way we can begin to do so.

Dominic is a junior Pre-theology major living in the Interfaith House at Ohio Wesleyan University. He is currently an inquiring candidate for ordination in the West Ohio Conference of the UMC and tweets sporadically from the handle @domisbreathing.