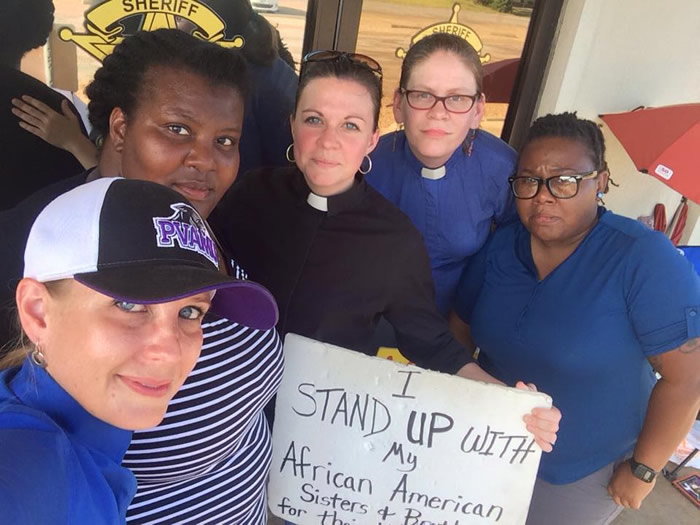 A vigil for Sandra Bland outside of a Texas jail is an example of embodied witness that the powers and principalities know not what to do with.

In our fast-paced 24 hour news world, people get forgotten too quickly. The biggest stories may trend on Twitter or blow up Facebook for a day or two, but then the people move on. Often the only way a movement is sustained is by linking incident with incident, exposing the narrative, but it takes a lot of persistence and a dedicated activist base to keep a story alive online.

That’s why advocacy online (slacktivism and actual advocacy) is best when it is matched with local advocacy in real life. And when it comes to #BlackLivesMatter, there was a ton of real-life advocacy. From Ferguson to New York to Baltimore to Charleston to Texas, in varied levels of violence and engagement, white people began to see what African Americans have known all their lives: there’s a level of hostility that is different for people with different skin color.

We’ve reached the one-year anniversary of Ferguson, and the story of Michael Brown is kept alive. And #BlackLivesMatter is kept alive because there’s plenty of incidents happening daily to remind people that the sum of all these devalued lives is worth less to society than white lives–and that’s unconscionable in 2015.

If people are forgotten, then accountability for violence done to them is deferred, if not denied.

One group doing this long-term work is the joint United Methodist and African-Methodist Episcopal protest in Waller County, Texas, that is keeping alive the inquiry into the death of Sandra Bland, an AME young black activist who died in a holding cell there. The vigil started two days after Sandra died, and continues to this writing.

Along with others, Rev. Hannah Adair Bonner (pictured above, bottom left), clergy assigned to St. John’s UMC in Houston and pastor of The Shout faith community, is keeping the story and name of Sandra alive through perpetual embodied witness, which the powers and principalities know not what to do with. Rev. Hannah is white and serves a black church, so little wonder that she’s been the target of multiple attempts to silence the vigil as white folks target our own when we “step out of line.” Here’s some of what has happened:

The powers and principalities experience this embodied presence as so painful that they barricade their own door, and chop down their own tree to move the bodies away.When trees are easily expendable, little wonder that people die in jail cells.

The Church of Satan? Maybe.

Most interestingly, the Sheriff told Rev. Hannah to “go back to the Church of Satan that you run.” Obviously, Hannah is United Methodist, so we’re more into satin paraments…but more seriously, I would claim the sentiment makes some sense.

In the Hebrew Scriptures, Satan is the accuser. He’s the one who stands in front of God, accusing an individual of sinning. It’s little wonder that a sheriff of the jail where a woman died would see the Church as like Satan wielding accusations of wrongdoing.

But the difference is that in the Scripture story, Satan stands apart accusing the individual from afar. The Church of God’s grace stands alongside the dead, the downtrodden, the persecuted and the marginalized. We are embodied, following Jesus known as Immanuel (which means “God with us”), choosing to be a part of the icky-ness of human interactions, rather than accusing from our armchairs.

The powers and principalities may experience embodied presence as Satan’s accusation, a devil on their shoulder whispering disconcerting things. When people fail to hear their own conscience, little wonder that people die in jail cells.

My first hope is that other justice movements learn from this lesson that sustained embodied witness is as important as the online narrative. Reminding people in real life who drive by that there’s something wrong with the world is more invasive than any news stories or tweets that a person can just shut off.

My second hope is that people know this isn’t about attention. It’s about honest grief over Sandra Bland’s death, about any number of nameless lives lost who don’t make the news, and a heartfelt conviction that such things must never happen again, and the violence ends today. Embodied witness is about sitting with people like Jesus did, not standing at the corners and praying loudly like the hypocrites (Matthew 6:5).

My final hope is that we watch out for the Watchers like Rev. Hannah, that we sustain the vigil with prayers and substance, that we say the name of Sandra Bland until a more just society is made real for all of us.