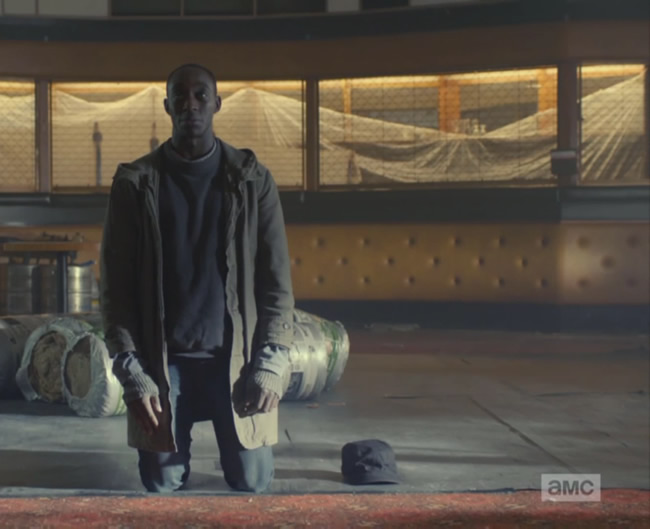 AMC’s show HUMANS examines what it means to be human through the experience of androids who explore even their relationship to God.

I’m really enjoying AMC’s scifi show HUMANS which depicts a near future where human-like androids are commonplace. The androids are mechanical servants who do menial tasks like picking up trash or cashiering, but they also are depicted doing physical therapy, police investigations, and full surgical efforts beyond human capacity. And yes, they work in brothels and strip clubs, because that’s what gross humans would do with such technology.

These synths (synthetic humans) all seem to be the same level of human-likeness, except for a band of five. They have somehow gained the ability to feel, to experience reality like humans have, and they are both fascinating to the people who gain their trust, and a danger to the powers-that-be that see them being able to “feel” their way to domination ala The Terminator.

There’s many ethical currents to the show, but it’s not until the 6th episode of Season 1 that we see an explicitly religious moment.

In Episode 6, one of the feeler synths is named Max. In previous episodes, his expressed desire is to get the family of feeler synths back together. That’s his drive: the special synths are a family and they need to be together. He is sad and misses them now that they are apart.

At the beginning of Episode Six, it seems like the family is not getting back together. Mia seems irretrievable, Fred is imprisoned, Nyska hates humans, and Leo leaves due to being distraught over the loss of Mia.

Max ventures out on his own to walk and he happens across a roadside memorial (pictured above) of a fatality accident. After reading the inscription on the memorial card, we next see Max the Synth on his knees looking up to the sky, a humanlike stance of prayer. This is his prayer:

Hello, my name is Max. I have two brothers and two sisters. But I think I may have lost them forever.

I don’t know if you can hear me. Your existence is unproven and seems extremely unlikely. But if you are there, and you listen to…things like me, please help.

I don’t have to see them again myself, just keep them safe. In return, I will be available to assist you in any way I can, and I will try to believe in you.

Max asks for his family to be safe and says if that can happen, that Max will serve God forever. The next moment, a human arrives with a key to fix Mia and the chain of events gets 3/5 of the family back together.

Prayers as Cause and Effect

The synths in HUMANS operate with cause-and-effect, stimulus and response. The human ability to think and feel is reduced to 17,000 pages of code. And their prayers are no less binary: if you do something, then I’ll do something.

And yet we are not much different. We pray after a cause. We pray after something bad has happened to either us or someone we care about. The churches were full after 9/11, and, after I became a pastor, I saw folks attend prayer vigils and worship services after Newtown, AME church terrorism, and other events. I see people attending church when their family members have cancer, calling on the pastor when a loss occurs, and other moments that I’m privileged to be a part of.

So it is not surprising that a Synth, modeling themselves after human behavior, approach God in the same way. We see then how many ways that we treat God the same way in our own prayer life. Are our prayers really this mechanical? Do we seek something more than a stimulus-and-response with God? And if so, what would that look like?

I wonder what it would look like for Max after his effect has been achieved and he seeks now to assist God too.

Living as the Cause

Perhaps we see it at the end of that episode. The family is almost back together, things are looking up, but then Leo and Max are chased by the police and only one can escape. Max sacrifices himself to save Leo. Leo, his Primary User, says that Max will die. Max responds:

If I die, it means I’ve lived.

His final scene is arms-outstretched, sacrificing himself in a Christ-like gesture. His action potentially ruins the movement for any other synths to gain full consciousness, but he saves his immediate friends. It strikes me that that’s quite the opposite of what Christ did (he died and his friends mostly were killed, but the movement lived on), but it makes sense as an echo of Max’s prayer for his family to be safe. Mia did a similar act by sacrificing herself to save one of her human family members, though she did so without knowledge of how important she was to every other synth’s freedom.

My takeaway? When we see ourselves as a cause, then our relationship with God is less mechanical cause-and-effect. Our relationship with God becomes more like a companion, a trusted mentor and coworker towards what is best. We may not be healed, we may not be saved, and we may not be able to do either for ourselves. But Max teaches us that when our driving motivation is clear, then we cease passively hoping, and begin actively acting to make the world a better place. “Be the change you want to see in the world” and all that.

May all our prayers be heartfelt and even in anguish, but also resolutions towards action to make the world a better place. Even the act of prayer (which anyone can do) contributes to this better world.

Regardless, I’ll be interested to view the final two episodes of Season One to see how it turns out.

Thanks for reading and commenting!