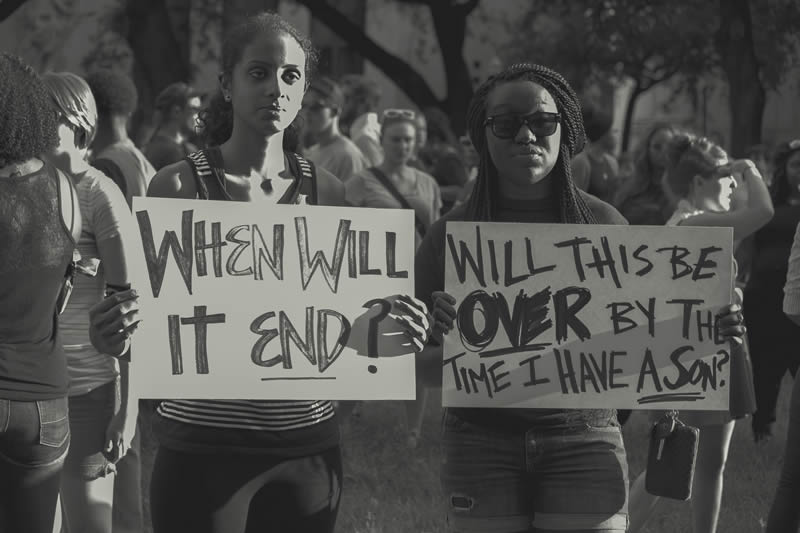 We live out God’s love by saying #BlackLivesMatter. Jailed lives matter. Until they do matter. Then, and only then, will #AllLivesMatter.

The Problem with “All”

Christians often say that God loves everyone equally. God loes each person equally and each person has value to God. Even the bad people: Jesus says in Matthew 5 that we are to love our enemies, to bless those that curse one another. We are called to love and pray for all people.

Often, then, Christians find themselves responding with “all” when it comes to times of public tragedy and injustice

However, that leads to problematic situations. Yes, all lives matter, but it seems like black lives matter less in American society and Christians shouldn’t water that down. Yes, we should pray for Dylann Roof, for the jailers, but maybe after our time of mourning the dead–or perhaps like Matthew 6, we pray in secret for all, not from the Twitter rooftops.

So how can a Christian believe that God loves all people–but at particular times, maybe some people more than others?

A basic Christian tenet is that God loves all people. God is a God of love, and God loves people perfectly in a way far beyond any human love. We can affirm, and I believe, that on an individual basis, God does love each person–from Hitler on down.

However, when it goes to the interpersonal or public level, we need some help figuring it out.

Black theologian Cornel West is quoted as saying “Justice is what love looks like in public.” Love is not sentimental for the individual, but a powerful force of transformation for the world. Okay then…but doesn’t that mean that God loves everyone equally? No matter how unequal their lives are on earth?

Well no. The following image is a helpful framework: 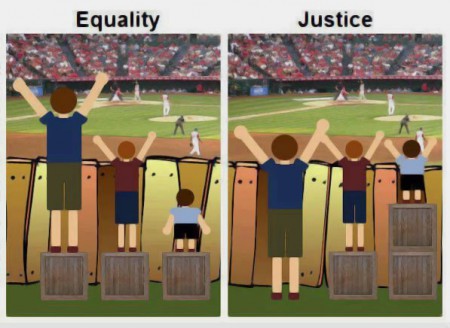 In the right panel, are each of the participants being treated equally? No. But the results are that they are all on equal footing regardless of their size. They are all able to experience the ball game equally, even though their situations are not equal.

Thus, if God loves us perfectly, then God cannot love us equally beyond the individual. God loves us equally as individuals, but has a preferential option for the marginalized and oppressed in society. For Christians who follow a minority ethnic Jew (Jesus) born in an occupied territory, who expressed love for the Romans (healing a Centurian’s servant) but also gave rules for revolution against them (Matthew 5), this idea that God loves with perfect love should make sense.

So when it comes to #BlackLivesMatter, Christians can affirm that God loves those whose lives are devalued by society in a different way than those whose lives seem to matter more to society. When society values all lives equally, then God’s perfect love has been realized, and only then will #AllLivesMatter.

For all these, the identities and experience of the oppressed, minority, or devalued people and perspectives lay  an authentic claim to God’s love in a different way than the majority group of a society.

There isn’t one. At least, not directly.

Speaking as a straight white male, I’m convinced we will not fully understand liberation theology because we do not often reside in the oppressed column of society. Sure, parts of our identities may be in the minority in certain situations, but in most situations, we are afforded or persevere through the privilege of our majority culture.

Furthermore, White Straight Men Liberation would be more easily achievable if we weren’t actively opposing it. As MLK wrote in his 1963 Letter from a Birmingham Jail:

Over the past few years I have been gravely disappointed with the white liberal. I have almost reached the regrettable conclusion that the Negro’s great stumbling block in his stride toward freedom is not the White Citizen’s Counciler or the Ku Klux Klanner but the white liberal, who is more devoted to “order” than to justice; who prefers a negative peace, which is the absence of tension, to a positive peace which is the presence of justice.

My demographic has silencing patterns to the above movements to liberate God from our majority culture clutches–especially when betrayed by one of our own. A year ago, after being lambasted for daring to name a majority culture as placing a minority LGBT culture in an untenable situation, I lost a dozen straight white male former conversation partners to this blog. After naming identity as a critical component of theologizing, the silent treatment began and the conversations stopped including me–which to an extrovert is pretty hard to take.

And yet for the past year, I’ve felt more free and engaged with justice movements than I had in previous years. Maybe I stopped being the white liberal stumbling block (once in a while). And if so, maybe liberation means liberation for me too. Maybe straight white men can experience liberation by acting with others, serving others, and being actually present in the struggles of oppressed people today. By living into the stories, by being rooted in common experience, we can see that liberation is for us all, either as a claiming of our identity or as an overcoming our identity’s privilege.

Identity matters when it comes to theologizing. Whitewashing away identity through claims to orthodoxy or tradition is incredibly problematic in a world of interconnected difference. If your theology is silencing revolutions rather than enabling them, then you don’t really believe all lives matter.

And Justice For All.

We know God loves justly, perfectly, and thoroughly in a way far beyond our abilities to comprehend.

And we know God through Jesus Christ, who was the oppressed, the occupied, the forsaken, the executed, the “what good can come from Nazareth.”

Therefore, we live out that perfect love of God by saying #BlackLivesMatter. Jailed lives matter. Until they do matter. Then, and only then, will #AllLivesMatter in a way that reflects God’s perfect love.

May God be with you on your quests for justice, for a perfect love in public that reflects God’s perfect love for each of us.