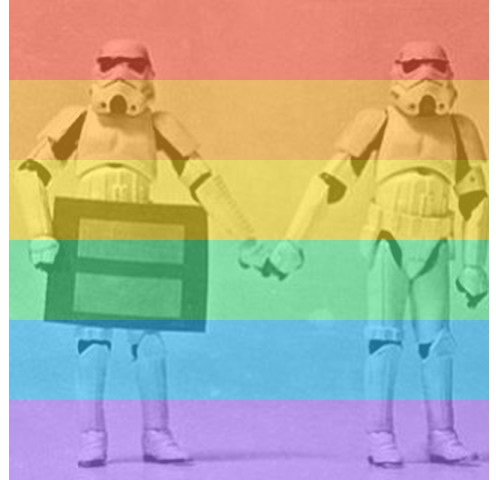 The following is a guest blog by a pastor in Kansas regarding how Christians can celebrate marriage equality by drawing on Scripture and Tradition, not in spite of them. 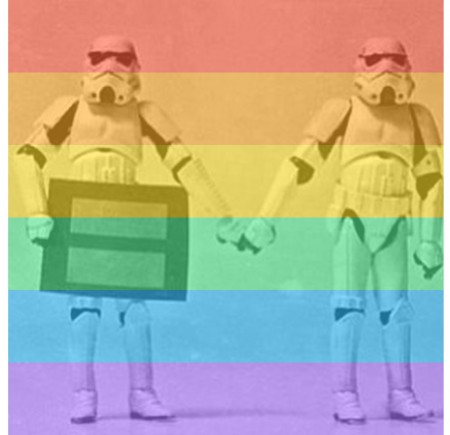 “The Day of the Rainbows”

Joining the avalanche of rainbow profile pictures on Facebook a few weeks ago in the wake of the Supreme Court ruling wasn’t something I put a whole lot of thought into.  If I had considered it more deeply, I most likely would have decided against it since “slacktivism” goes against my personal preference of deeper conversations and my desire to avoid fads.

Nevertheless, I was in the midst of a home/work move and, finding myself lacking the time and mental capacity to do more and wishing to not be totally silent, I made the simple addition to my picture. Responses to my change were generally positive and I had contented myself that it would be the extent of my response.

But one comment on the new picture spurred this contribution.  A long-lost friend from high school posted a friendly question asking how I “rationalized” my support for marriage equality in light of my work in the church.

Who does the Good News belong to?

One of the most important themes Christianity has had, beginning with the start of the church and continuing through the modern age, has been the ever-expanding circles of inclusion and belonging.

In the first days of the Church the questions were: “can Gentiles become part of this Jewish movement?” and “Who does the Good News belong to?” Peter (and later Paul) argued and eventually prevailed for a mission that looked beyond traditional culture lines and taboos in favor of a more expansive understanding of God’s grace through Jesus. They chose to answer the question by suggesting the crazy notion that the Good News might, in fact, belong to everyone. That’s the type of love that Phillip extends to the eunuch in the book of Acts, and when asked if there was anything preventing him from baptizing the man who was different (in a lot of ways: class, race, status, sexuality that the eunuch probably wasn’t given a choice in) Phillip finds that he cannot be the one to stand between the eunuch and God. Peter declares much the same thing about Gentiles in Acts: “So if God gave them the same gift he gave us who believed in the Lord Jesus Christ, who was I to think that I could stand in God’s way?”

We as the Church have not always been good at opening these doors and it’s important to note that some our darkest moments in Western civilization have been when faith has been wielded as a weapon to exclude rather than include. The Crusades, Inquisitions, our treatment of native populations around the world, and on-going and pervasive gender inequality are all easy examples of exactly how bad things look when we shut the doors of our hearts.

As a historical point I think it would be fairly easy to argue that the earliest conception of the Church was highly inclusive and diverse in thought and nature. Don’t get me wrong – there were still people who HATED the idea that someone else thought differently than them – they just didn’t have tools to use to stop it.  That all changed when Christianity was first legalized and then nationalized within the Roman Empire – the question became not “who does the Good News belong to?” but rather “who does the Good News belong to, REALLY?”.  Who are the real Christians? Followers of Valentinus? People who had learned from the theology of Origen?

Through the power now wielded at a national level, a sequence of church councils and the adaptation of a Greek word meaning “school of thought” (hairesis) into a word for wrong belief (heresy), Christianity solidified its positions – but fully 300+ years after Christ had died, setting the Christian canon of scripture and formalizing non-Biblically addressed issues of theology like the exact nature of the divinity of Christ, the nature of the Trinity and so on.

I would suggest that the following period in Western civilization could be characterized by the phrase “you’re welcome to join our church, as long as you are willing to look and act like us.”  Notice that Paul explicitly argues against this type of thinking in dealing with such Hebrew/Gentile differences such as circumcision and dietary laws. Due to a host of circumstances (fall of the Roman Empire, Dark Ages, Black Death, invasions and feudalism in general) the Church either shaped or began to reflect a pervasive attitude of fear for “the other.”  By the time of the Protestant Reformation kings and bishops sometimes even counted their own poor citizens as “the other.”

Can we ever turn back towards each other?

Whatever our mixed emotions on Luther, I think we can agree that translating the Latin Bible into common German in 1522 was one of several important turning points that once again opened us to the question “who was I to think that I could stand in God’s way?” I’m not arguing that it was all uphill from the 1500s, but putting scripture into a form normal people could access was the first of a series of vital steps that began to move the Church toward people rather than withdrawing from them.

On the issue of scripture: if you want a more in-depth discussion of this issue I would highly suggest the book “God and the Gay Christian” by Matthew Vines.  Although his work isn’t groundbreaking, it is an accessible and powerful book that brings the reader up to speed on the last 200 years of Christian scholarship on how we interpret scripture (and specifically scripture relating to homosexuality).

Quick version from my point of view (oh lord..): Jesus sums up the law by giving us the new commandment (mandatum novum) “Love one another as I have loved you” (which I would argue is a MUCH higher standard than the so-called ‘golden rule’).  Yet many Christians can get hung up on Matthew 5:18 where Jesus says that not a single letter of the law will not pass away – without realizing that this is an example of the late first-century Church in conversation with itself rather than with its Jewish heritage. It is more likely the author of the Gospel was attempting to directly refute the teachings of the Antinomians (who argued for such an extreme version of Grace that it left out moral responsibility entirely) or movements like the early Christian theologian Marcion (who rejected the Hebrew Bible) than it was intended to be a strong defense of purity laws.  If the early Church believed that not a single letter of the law would pass away then why did they accept God’s commandment for Peter to eat unclean animals and associate with unclean people in the book of Acts? Why did it lift up and record for posterity the stories of Jesus where major societal boundaries were crossed by the savior himself?

It seems that the early Church believed that God was interested in knocking down the walls we use to separate ourselves from each other, even if those walls had been previously set within Hebrew scripture.

If you could have dinner with one historical figure…

I like to think that if we could bring Paul forward in time, and once we finally got him to stop screaming in horror at all the noise and technology around us and found someone who could speak enough Greek or Hebrew to translate, it would still be a struggle for him to adapt his words into our modern contexts.

Paul deeply believed in the spiritual nature of humanity and thus a spiritual salvation – it’s what leads him to let down all the walls he knows how: Greek or Jew, slave or free, male or female. He also condemns acts which he sees as exploitative or “body-bound.” There is a larger debate here dealing with Greek words that Paul has seemingly invented, but that’s why I’d encourage you to read Matthew Vine’s book. Would Paul see exploitation in a 30-year loving relationship between two men?  I know I don’t.  It’s also important to note that Paul would probably be horrified with straight marriage, anyway – read 1 Corinthians 7 to get a sense of how much he was proud of himself for being celibate and how much he wanted people to follow in his footsteps.

In the end Paul speaks authentically from his time and place in history to what spiritual salvation entails – but are barriers around nationality, status and gender the only walls which are lowered when we fully accept Jesus into our hearts?

Gifts and Graces and Griffith

To close I want to quote one of my favorite letters. It was published on May 25, 1880, as the Methodist Episcopal Church (North) was just beginning a long struggle with the question of women in ministry.  It was written by a woman named Mary Griffith who had been elected as a delegate to General Conference but had been denied her seat:

“Our Church is composed of men and women.  Trite as this sentence is, its truth is constantly ignored.  There are at least twice as many women as men in the average membership.  In this two-third majority resides a moral, spiritual, social, and financial power, without which we can hardly imagine the Church existing at all; yet all through our economy, outside the higher places of privilege, opportunity, and power for good, there is a sex-line drawn, shutting women out.  If there is friction here, who are at fault but those who made the line?  If foam breaks against the wall, the builder is responsible, not the sea.”

I will not guard the walls upon which the sea is breaking. If there is but a single person to whom I can more effectively minister, extend the grace of Christ or love as Christ loves me then I shall pledge my heart, mind and strength to stand with those who are called but who are not welcomed… yet.

Acts 8:36 – As they were going along the road, they came to some water; and the eunuch said, ‘Look, here is water! What is to prevent me from being baptized?’

Acts 11:15 – And as I began to speak, the Holy Spirit fell upon them just as it had upon us at the beginning. And I remembered the word of the Lord, how he had said, ‘John baptized with water, but you will be baptized with the Holy Spirit.’ If then God gave them the same gift that he gave us when we believed in the Lord Jesus Christ, who was I that I could hinder God?”

Rev. Ben Hanne enjoys sailing in land-locked states and other apparent ironies. He is a Provisional Elder serving in the Great Plains Annual Conference and is half of the podcast “Preach, Pray or Die” (Facebook, Twitter) which features stories from the lives of people in ministry in the UMC.

Thoughts? Thanks for reading and sharing!