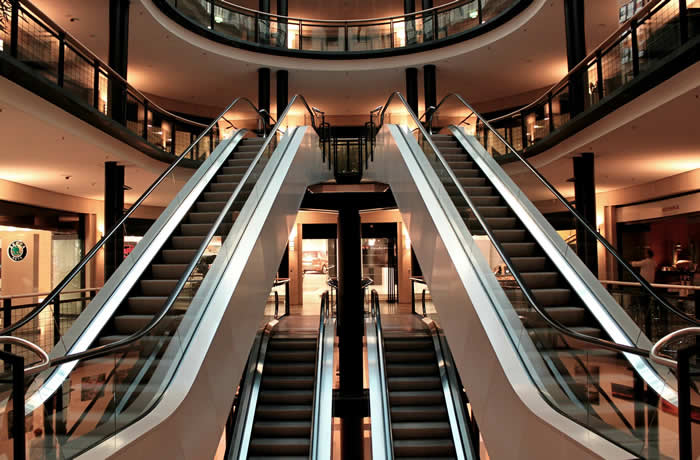 Some reflection on the theory of shopping malls and how they relate to the future of “one stop shop for Jesus” megachurches.

The Gruen effect is what happens whenever a person goes into a shopping mall and is overwhelmed by the sights and sounds and atmosphere and…they forget they were there for just one thing and become open to buying more things. It’s named after the creator of the first shopping mall–here’s how it came about:

[Austrian Victor] Gruen argued that good design equaled good profits. The more beautiful the displays and surroundings, the longer consumers are will want to stay in a shop. The more time a shoppers spend in a store, the more they will spend.

Gruen started making storefronts all over the country. And in his travels across the United States, Gruen saw how much time Americans spent riding around in their cars, cut off from the city and from each other. This was especially true in the suburbs.

Gruen presented his a solution for America: The Shopping Mall.

Many of us can attest to the Gruen effect. For me, there’s a mall in Portland, Oregon, that is the first mall I’ve frequented that is built in a loop, not one long hallway with different offshoots. So you can go round and round and forget where you parked your car and somehow you buy an Annie’s Pretzel while you search–or is it just me?

It can feel overwhelming, but that’s the point of the Gruen effect: to make us forget the focused reason we came and become open to more possibilities.

Come to think of it, I’ve felt that way whenever I walk into the foyer of a megachurch. I see the bookstore, the welcome center, the greeters with great hair, the live or streaming music over the air, the upper balcony with people looking down at the crowds, the themed hallways for different ages…it’s the same sense of disorientation when I walk into a shopping mall with the neon lights and canned cold air.

To be clear: The worship service usually isn’t disorienting as the service is focused on the stage, preacher, message, and music in a cavernous room with dimly-lit theatre-style seating. But the long walk to the car and back could has some elements of the Gruen effect.

Let’s draw out two parallels with Gruen’s work and with the megachurches that I’ve seen firsthand.

First, shopping malls served the purpose of being the third place where people could feel connected while doing a mutual task. If you’ve been at the mall on a Friday with the roving packs of teenagers dropped off by their parents, or a Monday morning with the (slower) roving packs of senior citizen walkers, you know what I mean. From the article:

The suburbs lacked what sociologist Ray Oldenburg calls third places.  If home is the primary place, and work is a second place, then a third place anywhere else one goes to be around other people—to build community, to hang out, to feel connected. Gruen wanted to give the American suburbs that third place…the Shopping Mall.

Churches for centuries have served as this third place, perhaps peaking in the 1950s/60s as civic life centered on the mainline churches. Church was where politics were done, connections were made, conversations were had. The third place is the heartbeat that pumped blood and energy into the home and work life–and the church fits into that well.

Second, the description of his first mall (Southdale Center in Minnesota) sounds a lot like non-denominational churches I’ve seen.

From the outside, Southdale Center is not much to look at. It looks like a mall: an ominous, amorphous, boxy shape. In designing the shopping malls, Gruen ended his razzle dazzle storefronts and window displays. Southdale hardly has exterior windows at all. The draw now is what’s inside the mall: Gruen wants his shopping centers to have blank facades, with no signage on them, that consumers would then enter and be dazzled by the interiors.

The point of the Gruen effect is to make the inside so well-designed that it feels like another world of wonder and possibility–and that is disorienting. The point of the Pastor Gruen effect is to give a mountaintop experience to worshippers and congregants so that it feels like another world, another place where possibilities happen, transformation is possible, and there are people there that can be companions or guides along the way.

But is it sustainable?

I’m not sure this Effect is sustainable in both shopping malls and megachurches–and if it isn’t, it has serious consequences for the Church.

Thanks for reading and commenting–what other parallels are there between shopping malls and megachurches, or a church of any size?