Home/Church Talk/Bible Study/Devotional for Justice-Seekers: There is Death in that Pot 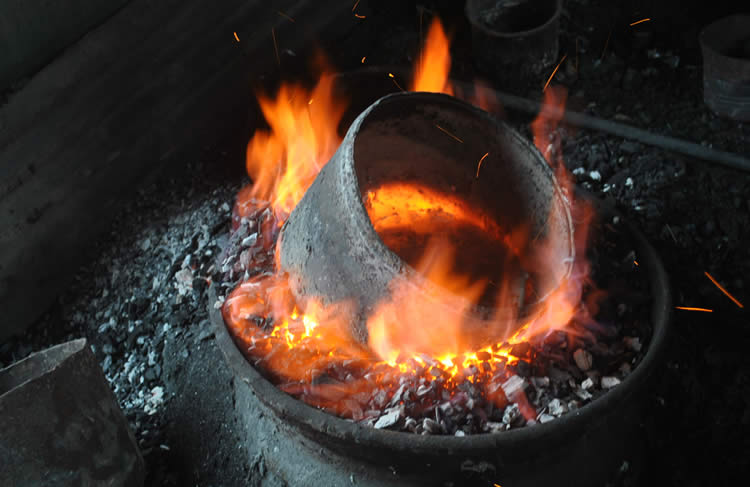 In the Hebrew Bible, Elisha is the successor to Elijah. And Elisha often does what prophets do best: yell at people and perform miracles.

One of the miracle stories of Elisha came to my mind recently: the miracle of the pot o’ death. At least, that’s my title for this story.

When Elisha returned to Gilgal, there was a famine in the land. A group of prophets was sitting before him. He said to his servant, “Put on the big pot and cook some stew for the prophets.”

So one of them went out to the field to gather plants; he found a wild vine and gathered wild gourds from it, filling his garment. He came and cut them up into the pot of stew, but no one knew what they were.

The stew was served to the prophets, but as they started to eat it, they cried out and said, “There is death in that pot, man of God!” They couldn’t eat it.

We know the death in the pot…

I don’t recall ever engaging this Scripture in all of seminary. My only memory of it, in fact, was at the 2005 Reconciling Ministries’ Convocation, where Rev. James Preston, who was in Texas at the time but since moved to Chicago, preached on the scripture. I remember him outlining the injustice in society, in our church, in our world, and repeating “there is death in that pot, people of God” over and over. It stuck in my mind.

But the death in the pot is not natural to it.

In this passage, Elisha has set a table and the servants gathered the stock for the stew. One servant went the wrong way and added something terrible to the pot. Something wild and unclean. Some racist structure or policy in our church. Something that keeps us from gender equity. Some little line about homosexuality added once and difficult to remove. Some legislative manipulation that rendered our social justice witness inert. Some close vote that kept divestment from injustice off our list of witnessings.

All it took was a few bad things to render the whole pot to be death and unable to sustain the prophets in our midst.

…and we are called to throw something in.

We who seek justice in our churches and our societies have death in our pots. And as much as we try to eradicate it, as much as we try to pull out the terrible roots and wild gourds from our pots, it may not be possible by our own will to pull the poison out. It’s there, it’s part of our history and tradition, it’s wrapped up in layers of legislative manipulations or powerful status-quo-keepers.

There’s death in that pot that we may not be able to pull out.

But what we can do is add something in.

Like Elisha, we can throw in the flour that renders the death inert. That removes its sting. That nullifies its poison and makes the pot palatable again. That makes our church just—if only one bowl at a time. We can throw in the love, mutual respect, and humanization of our enemies that is not afforded to us. We can add it in and redeem that pot, one token of appreciation, one kind action, one step towards justice at a time.

My hope for you, fellow seeker of justice, is that you keep your mind and heart on what you are putting into that pot full of death. Not only naming what you want to remove and renounce, but naming what you are adding in to create the church or society we want it to be known for. To throw yourself into the church that we love even when we don’t like it.

The pot is before you…

What are you putting into the pot that will allow the people to eat at God’s banquet of love and justice? No matter how strong the death is in the pot, Elisha reminds us that death can be nullified and the people perpetuating it redeemed into a helpful contribution to God’s table of justice and joy.

Thanks for reading. Thoughts?