I’ve been enthralled by the British TV show Black Mirror. It has a fascinating premise: take a single piece of technology that is available today and kick it down the road a few upgrades–then see how people would use it in horrifying ways. Amidst my reveling in its fantastic blend of science fiction, technology, and sociology, I also found some commentary on faith and the human spirit. 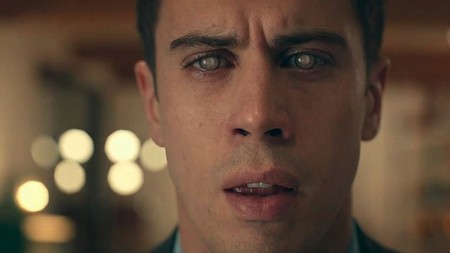 A History of You…

In Season One, the third episode “A History of You” depicts a future where a form of Google Glass is ubiquitous: people have memory chips implanted behind their ears that record their every memory. People can then replay any recording in HD video, zoom in, have a computer lip-read inaudible observations, and they can bookmark memorable moments.  They can watch the video either on their eye-screens or ala Continuity/Handoff throw them up on any flatscreen for others to watch. It’s pretty creepy to see people’s eyes go gray (like the screengrab above) whenever they are accessing a memory–gives a whole new meaning to “zoned out!”

We see then the practical ways that humans use these technological advancements. The airport screens a person’s memory before letting him/her board a plane. An infant’s record is replayed by the parents after being with a babysitter (to check if anything bad happened). A serial womanizer keeps all his relationship encounters bookmarked.

The primary storyline is a British couple who have a small child. Black Mirror then examines how a happy couple might use this technology when one partner suspects the other of infidelity. By using the technology, he is able to do things previously unheard of: He reviews how she laughed unnecessarily at things at a dinner with this third party; how her body language changes when her husband arrives; and in a rather violent scene, he attacks the third party and forces him to bring up their former tryst on the screen. By using the technology, he is able to weave through the small lies to get to where he knows everything–but at what cost?

The Cost of Certainty

In a world where everything is recorded and dissected, what is faith?

In the Christian tradition, faith is often defined as belief: believing in certain precepts which may not correlate with observable science. This type of faith does not exist in Black Mirror: everything is observable and dissembled, replayed and reviewed, such that certainty can be easily achieved. Happenstance can be explained; mystery can be overcome by observation; miracles can be disproven by multiple camera angles; dissected body language can reveal deception. This is the logical end of the “pic or it didn’t happen” world that we live in today: cautious about mystery, incredulous about the incredible, more godlike in technology and yet less Christlike in use of it.

So what would faith look like in this world?

The late Marcus Borg begins his book The Heart of Christianity by examining four types of faith, with only one defining “having faith” as believing certain things to be true. Borg draws out other understandings such as faith as trust, faith as fidelity, and faith as seeing through the eyes of God. The second one (seeing faith as radical trust) pushes back against this dystopian future by leaving certainty up to God.  Jesus exhibits this in Matthew 6 when he soothes the Disciple’s anxieties by pointing out that the lilies grow and the birds are fed and all is well in the processes unobservable by a pre-scientific society. Likewise in Black Mirror’s post-scientific society, anxiety over how things are explained dominates people’s lives. Trusting in God (a definition of faith) is significantly more powerful than beliefs about God.

Black Mirror turns a…well, a mirror to our very human desire for certainty in the midst of mystery. As technology advances and fewer and fewer things evoke that sense of mystery and uncertainty, there’s less a sense of awareness of God working in the world. There’s less desire even to imagine beyond one’s own reality! As Grantland points out, there’s something else missing from this future world: television shows, movies, and music. There’s no media whatsoever–and why would there be when reality can be recorded and replayed? There’s even a scene where one guy is showing the deterioration of his carpeting! A lack of nurturing of imagination taints this world overrun by certainty.

In a world where the empire controls what is known and observable, it has vanquished the rebellion of the uncertain and disempowered those who refuse to participate in the system of certainty (ie. a prostitute without a chip is not helped by the police). In a world where certainty is idolized, faith and imagination suffer.

And yet a better form of faith could emerge: faith as trust and fidelity, rather than faith as assent to a list of precepts which may or may not correspond with the observable world. That’s a faith I can believe would thrive in Black Mirror–and even more in the real world today that could resist the dystopian future through an embrace of imagination and trust.

The End of Faith?

The great irony in “A History of You” is that it begins with the husband making fun of the womanizer for archiving all his previous trysts and replaying them instead of being able to hold onto a real relationship. The episode ends with the (now ex-)husband alone in his empty house, replaying videos of happier days with his spouse and his child.

Was certainty worth it? To a point. He knew and could justify his actions–and blame her for her infidelity that “caused all this.” And yet is it worth the reality that he now lives in? One that he forced a confession out of her, instead of a mutual building of trust in their relationship so that when the truth came out, it wouldn’t destroy it? Like a memory on the chip, an entire relationship was lost in the blink of a powered-down monitor returning to its black mirror state.

In a fictional world where faith is usually defined as knowledge, such technology can rob us of our joy in the present moment.

In our present world where faith seeks certainty, mystery and trust suffer.

It may be that such technologies will emerge, but they will not rule us so long as trust is nurtured in relationships and communities. Seeing faith as trust and fidelity will go a long way to creating a world that will never be reflected in a Black Mirror.