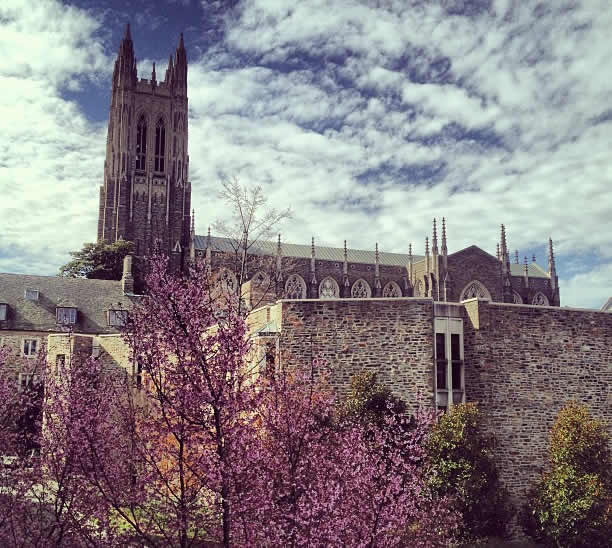 There were three odd sounds emanating from Duke University in North Carolina this past week as they weathered a controversy over whether to call for Muslim prayers to begin from the bell tower of the Chapel–a decision that was ultimately reversed due to threats of violence.

“While it might seem an odd juxtaposition to have the adhan chanted in the same tower from which bells toll daily (and twice on Sundays!), it is actually in keeping with the university’s commitment to fostering the spiritual development of all students,” Sapp wrote. “The chanting of the adhan communicates to the Muslim community that it is welcome here, that its worship matters, that these prayers enhance the community and that all are invited to stop on a Friday afternoon and pray.”

Outrage: Fueled by Franklin Graham’s call for alumni and donors to withhold their donations, as well as his distorting of what the prayers include, there were varied outlets of outrage. Most people commented on the dissonance of a university doing a call to prayer for a different religion from the peak of the symbol of their Christian heritage. Such comments mistook that these daily prayers were already taking place and the Chapel community is overwhelmingly Christian. There are daily carillions playing Christian hymns and in the same week as the adhan was to begin, no fewer than seven Catholic masses (three on Sunday), several adult Bible Study meetings, Christian Sunday school, children’s “Godly Play,” and a “Midweek Prayer” services were to be held (source).

Violence: Late in the day on Thursday, it was revealed that the university had weathered many credible threats to student safety. Whether or not there is a direct link between the threats of violence and hearing the outrage machine, what is clear is that Graham and others do not consider themselves responsible for the threats of violence. It is never acceptable for Christians (highly likely) to be threatening violence against Muslims, especially this week:

At a time when much of the world, appalled by the Charlie Hebdo massacre, is rightly standing up for the right to say things that offend Muslims, a peaceful gesture by Muslims has been quashed by a threat of violence—much of it emanating from Christians.

Silence: Finally, there was the sound of silence. The administration’s press release did not reveal that there had been threats of violence. While there’s certainly consideration as to student sense of security and wanting to avoid a panic, the news of threats would be unavoidable.

This was a wasted opportunity. Instead of a reminder to others of the power of their words had caused an escalation to violence, the release merely said the university did not succeed in their goals. That is highly discouraging.

As Elie Wiesel said “Silence encourages the tormentor, never the tormented.” What could have been a call to reflection–for people’s responsibility for their words and our sources of religious violence–included only silence instead.

What was not heard

With separate centers for Christian, Jewish and Muslim life and with dedicated prayer rooms for Catholics, Hindus and Buddhists, Duke responds to religious diversity not by reducing all traditions to one common denominator but by attempting to let each religious group on campus express itself in its own unique way.

Calls to Prayer: The only sound we didn’t hear from Duke Chapel this week was a call to prayer for the Muslim students. Instead of a weekly reminder of their value and their role as a student, they heard diatribes about their faith, their culture, and themselves, from the supposed images of Christianity. We must do better.

What must be heard

Duke Chapel continues to be a Christian church of uniquely interdenominational character and purpose. Through its tradition of inspiring worship and music, and a calling to walk with people of all faiths and circumstances, Duke Chapel acts a beacon of grace on campus and in the community. All are welcome to take part in worship, learning, dialogue, and service.

Calls for responsibility: The echo-chambers are stronger and stronger these days, as people only watch, listen, interact, and live with people who reinforce their beliefs. Any time a supposed leader speaks, they do so knowing that it will be escalated by those people. To not give nuance or intentionality or dissuade escalation is to be willfully ignorant of how the world works these days. To say what you are not saying is as important as what you are, if you are to combat extremism, fundamentalism, and people who use your words to justify violence.

Calls to Learning: Aside from a better standard of living, education and open communication are often our best tools in preventing extremism and other radical behaviors. Educated Muslim and Christian students can help combat extremism and fundamentalism in their traditions more authentically and directly than any of us on our armchairs. Let us support these students both in their academic studies but also in their faith traditions that guide them both towards peaceful coexistence.

Calls for Peace: May we all make this prayer today.