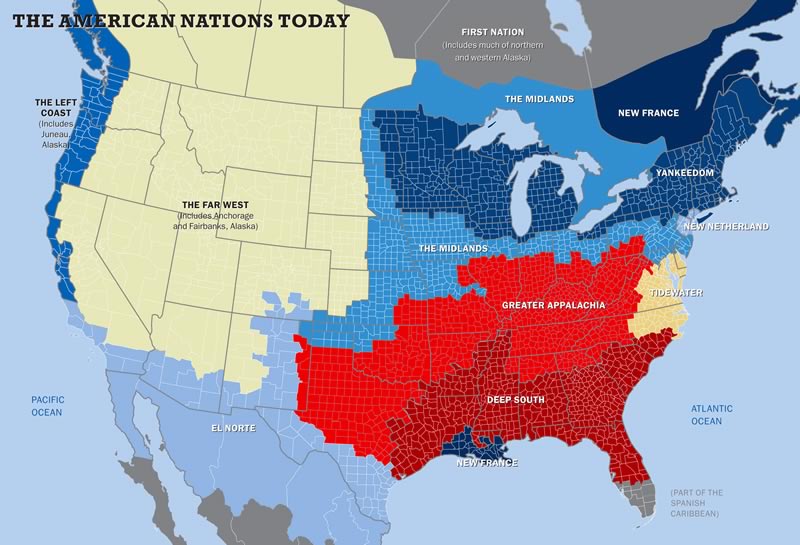 The picture above depicts Colin Woodard’s 2011 book American Nations, a history of 11 rival regional cultures that eventually became the United States of America. We know the Yankees and the Deep South, but what about Tidewater and New Netherland? Woodard draws out the cultural similarities of these regions as well as what differentiated them during colonial times. You can read some primers/reviews of Woodard’s book here, here, here, and here, as well as more maps using this lens here and here.

I find Woodard’s book and sketch to be pretty accurate. Having grown up & served churches in Greater Appalachia, studied in Yankeedom, and now live in the Left Coast, I’ve had both an insiders and an outsiders’ view to these regions, and I find Woodard’s rough sketches to be pretty accurate, as well as helpful to me as a minister to these regions. Many folks critique the book by pointing to the high level of mobility these days (my own story above being an example) and thus how the people who reside in these regions were not necessarily from there. But by and large, I find value in the model overall.

The Model and the UMC

The originating culture of the United Methodist Church came about alongside the birth of the United States of America. You can see the mutual impact in our history (we were born during the Revolution, split during the civil war, and did our last major unification after WW2), our structure (three branches: legislative, executive, and judicial), and our regions (our jurisdictions are in place so Northern bishops can’t serve in the South). It would then make sense to apply this model of American development to the UMC as it came about around the same time all these originating cultures existed.

While the United Methodist Church is now a worldwide church, with many nations large and small, we will use the term “nation” in Woodard’s vernacular as referring to the founding nations of America. 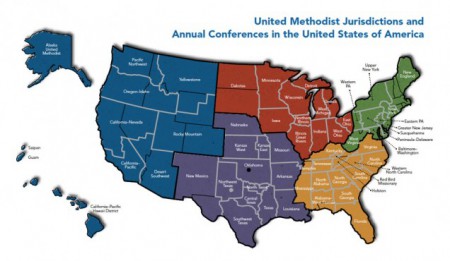 59 Annual Conferences in 5 regions (though some have merged since 2013). But if we overlay the Woodard book, look at what we get (click to enlarge). 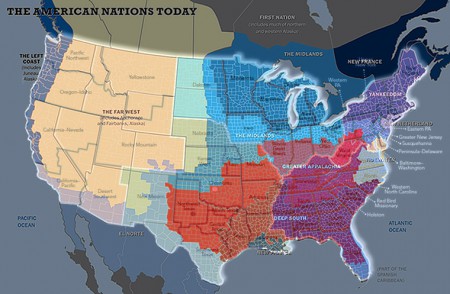 This is a bit confusing, but it’s the best combination of two maps I could find that more or less lined up (everyone makes America taller or wider in ways that don’t cause East and West Coasts to line up, so this is the best I could do).

Evaluating the Nations of the UMC

To answer the question of “who rules the UMC?” we will evaluate the United Methodist Church’s power structure based on two criteria:

Both of the above are considered ways to evaluate vitality: the most vital churches are the ones with a healthy balance of people in the pews, names on the rosters, and dollars in the plates (we’re saving the finances for a future post). While these are false proxies as they do not accurately evaluate who is most vital or the best disciple, I will use them for their ease of comparison.

To apply this model, I divided the Conferences into the Nations (See the list – pdf) and then added up the population or attendance in each from the 2013 UMC Data (see end of post). One acknowledged variable is that our Annual Conferences do not always fall neatly over Woodard’s lines (though they often do!). In those cases, I’ve made an executive criteria: if most of the conference is in one region, I put it in one. If it falls into two pretty evenly, I gave half its value to each. I don’t know them all so it may be one nation within an Annual Conference has higher attendance/membership than the other, but outside of going county-by-county, this rough sketch is the best we’re gonna get at the moment.

Using the list alongside the 2013 data of membership and attendance, here’s how the Nations compare with regard to worship attendance at the end of 2013:

Here’s how the Nations compare with regard to church membership at the end of 2013:

Summary: Barring other (significant) factors for the purposes of comparison, the cultural conditions of Greater Appalachia currently result in the greatest compatibility with the United Methodist Church’s mission and ministry. Greater Appalachia serves as the linchpin for two cultures that are highly different: the Midlands and the Deep South. By pairing cultural values with either of them, they reach 51% of the membership. Greater Appalachia is the strongest cultural force in the United Methodist Church, with a land mass that spans the midwest, to the plains of Oklahoma, to Texas, and the northern parts of what is considered to be “the South.”

There are serious problems with evaluating power based on attendance and membership. Regarding attendance, in my culture of the None Zone, many of my most dedicated members attend bible studies, outreach events, and volunteer opportunities 2-3 times a week, but are only in worship 1-2 times a month. Why are they only counted in one aspect? Regarding membership, Hispanic and Asian communities can have roadblocks to church membership as some are undocumented and may worship regularly but do not want to be “listed” in an official capacity. So at best, these are false proxies that are problematic for the biggest mission areas of the church (minority populations and the secular West) but they benefit the one area where there’s the most power (Greater Appalachia), so changing our evaluative process is an uphill slog.

I have a lot to draw from this map, but I wanted to gauge people’s perceptions of it first. One of the things we are proud of here at Hacking Christianity is our willingness to delve deep into data and draw some helpful narratives out of it. In our quest to be the Nate Silver of the UMC, we believe there are some conclusions that can be drawn from data and hopefully this was helpful for you.

Disclaimer: “The statistical data included herein were provided at no charge by the General Council on Finance and Administration of The United Methodist Church (GCFA) and may be obtained directly from GCFA, PO Box 340020, Nashville, TN 37203-0029. This data is proprietary and is owned by GCFA and may not be used in any commercial or exploitative way, to make a financial profit, or in a manner that defames the United Methodist denomination or its agencies or organizations. GCFA does not endorse any particular use of the data or accept responsibility for its interpretation or analysis by another.”