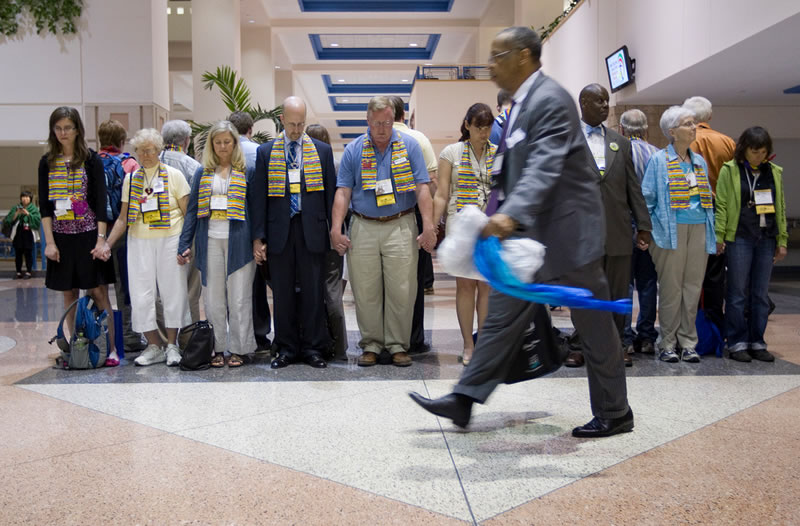 Current calls to “close” the highest doctrine-making body of the United Methodist Church are being made by persons of privilege who are ignoring what it means to put the abused in the same room with the abuser…alone.

General Conference Behind a Big Wall

Back in 2012, General Conference–the top legislative body of the United Methodist Church–was protested by progressives calling for the full inclusion of LGBT persons in the life of the church. Bishop Michael Coyner from Indiana called to close the General Conference and have police remove all non-delegates. While that decision was later reversed and no part of GC2012 was closed, the idea was retained in the consciousness of those seeking procedural advantage in the debate.

This past week in 2014, Dr. David Watson, Academic Dean of United Theological Seminary in Ohio, wrote that the 2016 General Conference in Portland should be closed to non-delegates from the get-go:

I suggest that we close the GC meeting space to all but delegates, bishops, and other essential personnel. Anyone who wishes to watch the proceedings can do so via live streaming. We should ban all caucus groups from having a presence inside our gathering space: no protests, no signs, no distribution of materials, no flash mobs, no stopping our work together. We should focus on the business at hand with as little distraction as possible…To have all of this business function in an atmosphere of constant distraction is unfair to the people who care deeply about [other] ministries.

The Via Media Methodists (sigh: this is the second post where The Watson and the VMM are together–what’s up with that?) also support this plan. However, they obviously haven’t attended GC: they say “the floor should be closed like Annual Conference” when that’s exactly how GC is set up now. They have an area closed to delegates only and with observation bleachers. Watson is proposing closing the entire room to anyone but delegates and pre-authorized people. Regardless, here’s why:

Closing the floor would prevent some of ideological grandstanding by unelected and uninvited parties.  No protests.  No propaganda.  No seizing the table.  No caucuses, at least inside the bar.  Just doing the work the church has called this body to do

Finally, Joel Watts also supports this idea because to him, holy = separate.

So from the perspective of these guys, the body needs to be closed for a matter of integrity: GC cannot do what they are charged to do with outside people in the bleachers or within visual range of the speeches.

What We Don’t Get

Looking at the list of people calling for such things, here’s the thing: there’s a lot of things that particular demographics just don’t get.

I know because I am a married straight white man and rarely not in the majority culture. And I often have to see beyond my privilege, and I’m thankful to gracious friends who call me on it.

So hear this and understand: General Conference is a big scary room for our LGBT members and delegates. Imagine being in a room with people who want to change you, who want to ignore you, who want to exclude you, and in some cases, if you were in their country, who would turn you in to face the death penalty.*

Now imagine you are alone.

You don’t have to imagine what is needed to remedy this situation. Look at this picture taken when LGBT and straight allies made a declaration from the floor of General Conference 2012:

There’s a reason why advocates are invited to be with people at decision-making moments: it’s scary going at it alone. The protestors and the silent witnesses who stand when a statement is made at the microphone–the ones who blow whistles when renounced churchmen like Albert Outler called LGBT people sinful and promiscuous–they aren’t there for you. They are there to support the delegates who love their church but are in the lion’s den, and the gay MethoNerd teens who might happen to be watching from home on the livestream, yearning for change.

That’s why an open and transparent General Conference is so important. Its current form (with a distinct bar where only delegates can be, but non-delegates are in the room) is both inclusive of the voices of the diversity of Methodism and functional to allow for clarity of voting. You want a  both/and? You got it already.

“As if the slogan ‘therefore, go’ weren’t enough of a marketing disaster for a denomination known for its exclusion of LGBTQ people, now comes the proposal to literally close the doors at General Conference and conduct its queer-bashing business away from any public scrutiny. This is a terrible idea, shockingly undemocratic and exclusive. What made the conferencing in 2012 unholy was not protest, but rather the abuse heaped on LGBTQ delegates by other delegates and the silent complicity of those presiding.

Public scrutiny is an essential antidote to abuses of power of all kinds, including the kind of  spiritual violence we have been subjected to at General Conference. The proposal to close the doors at General Conference is nothing less than an attempt to make  vulnerable minorities defenseless.”

So, yes, straight white men, it’s uncomfortable. Yes, it’s disruptive. Yes, those ministries that are So Important To You™ are not being given equal time.

Because the Church is doing violence and requiring the abused must be alone in the room with the abuser, without support or advocates, is a requirement that would be ludicrous in civil society.

If you want equal time, if you really want to stop the distractions at General Conference, then stop the abuse, fully include LGBT persons in the life of the church, and we can get back to peacefully discerning the best forms of the church in the rest of Christendom.

But if what you really want is to make decisions without seeing the consequences on people’s faces, and to use procedural motions to cow LGBT delegates into silent submission on the floor, then be honest about it.

Guys, I understand. It’s hard to see how a seemingly innocent change would actually make the room more harmful for persons without our privilege. But while General Conference cannot easily do what they are charged to do with an open forum, they cannot be the Church that “does no harm” with a closed one. Let’s start there.