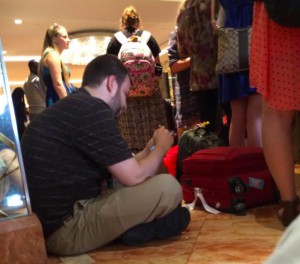 The Global Young People’s Convocation and Legislative Assembly (GYPCLA for you Methodist nerds) is an every-four-years gathering of young adults (clergy and laity) from United Methodist regions across the world. It was recently held last month in the Philippines during a hurricane.

From reading stories and having conversations with folks who went, it seems to have been a terrific experience.

The reporting, however, has had two odd frameworks that both bear correction to more accurately evaluate how this Convocation went and what it means for all of United Methodism.

The first odd framework comes from a familiar source of odd frameworks. The Institute on Religion and Democracy covered the Convocation in-person and on the way home breathlessly claimed that young United Methodists reject gay marriage petitions:

Three of these very clearly and directly addressed the question of church approval of homosexual practice…all three of these were considered, debated, and rejected…

This reverses the trend of the first two GYPCLAs, which both adopted homosexual-practice-affirming petitions. The first GYPCLA was held in South Africa in 2006 and the second was in Germany in 2010. The quadrennial event is organized by the Division on Ministries with Young People of the UMC’S General Board of Discipleship.

These recent votes also rebut the rather unnuanced claims some (generally older) people frequently make about how the church “has to” divorce itself from biblical and historic Christian teachings in order to pander to what “young adults” or “our young people” believe.

The problem with this framework is twofold:

The framework that the GYPCLA rejected gay marriage and reversed previous endorsements is faulty. A more honest framework would state that like previous Convocations, the question is a 50/50 split among young people delegates from United Methodist regions across the world and that mirrors their age brackets (GenX and Millenials). And that how legislation is written influences how it is voted on.

Update from the comments: The IRD corrects some of the numbers above in the comments, while Zzyzx reflects on the temperament before 2006.

The second odd framework is that the tactics and behaviors of young adults at the Convocation mean that we need to look to GC2016 for a better model, rather than hold ourselves accountable for our sins in the past.

The Northwest Texas Annual Conference made a video about their GYPCLA experience. It is a very odd video in that half of it is enlivening video, and half of it is big block scary letters across the screen. Here it is and watch especially the section after :48

There’s little dispute that such negative conferencing tactics were present. From two attendees that went and allowed me to anonymously use their quotes:

#1: I found the way that the group that kept trying to bog down procedure with stupid “questions” instead of proper questions toward the procedure was a little childish. Also there were three times people could go have conversation about the pieces of legislation and from what i could tell those where not as well as attended. The issue about translation was a little sketchy. they brought it up at that the 11th hour and not the two days we sat around waiting.

#2: [The] legislation was meant to neutralize or remove discriminatory language allowing all UMCs to practice what their clergy and congregations chose to. Nevertheless, questions and statements about how [the legislation] was trying to force people and churches who don’t believe in gay marriage to accept and perform them kept coming.

Finally, one of the allegations in the video was that “a pastor was influencing the presiding Bishop.” I found out who it was and contacted that accused pastor and he said he was simply providing his iPad to the Bishop which had a digital version of Robert’s Rules on it. I would definitely call him a church nerd, but not anything deceptive–and if you are still reading at this point, you are likely a church nerd as well.

But here’s the odd framing. Check out this screenshot from the end of the video:

Which is followed by the words:

“Who will be brave enough to give us a better example? GC2016, we will wait for you.”

Woah. Not so fast. We need to sit longer with that first slide a bit longer.

Hacking Christianity has previously articulated situations at other General Conferences that are perfectly in line with the rhetoric and tactics in the video.

Young people learn their tactics from the “real” adults. They aren’t needing guidance from a future group: they have already been guided how to act.

The framework that we need a better model from GC2016 is only half the story (or 1/11th of the story). The more honest framework is that young people learned these behaviors from annual conferences and General Conferences–and maybe from their local church meetings. If we are looking to change behavior, we need to look in a mirror, not at General Conference 2016.

As I soon begin my final year of being a Young Adult in the UMC (which is 35yo and younger, I’m told), I take frameworks of young adults and young clergy seriously. We write a lot about young clergy issues here at Hacking Christianity. Thus:

May we all be aware of frameworks and of drawing ever-more-closely to the truth of situations whenever we reflect on them for the general public.