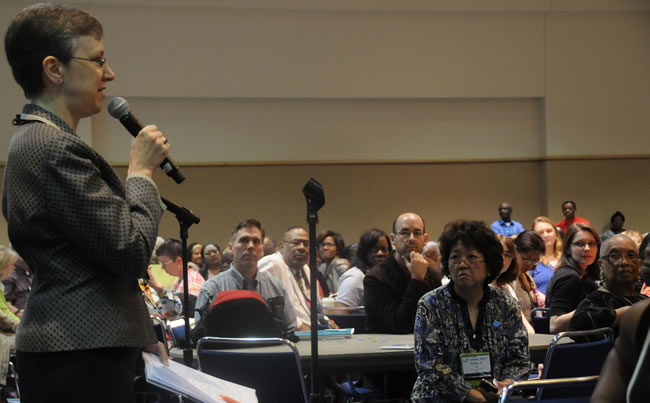 There’s an unfortunate narrative being perpetuated in the days since the Frank Schaefer appeal in the secular news coverage, and it merits correction. Some examples:

Host: We’re always talking about in the general public that attitudes are shifting so much, have you seen since this whole issue started until today, has there been a shift in the church that accounted for this ruling?…At the national level of polling, it’s gone over 50% in support, an outright majority support same-sex marriage in the United States: where is that split, that number, in the United Methodist Church?

O’Donnell: It seems like this is the period where the UMC is reconsidering whether there should be a penalty.

The appeals panel’s decision comes as public opinion, the legal landscape and religious doctrines toward gay rights are rapidly changing, often with considerable conflict. Polls suggest that a majority of Americans now support same-sex marriage, and it is now legal in 19 states and Washington, D.C.

The Methodist Church came about alongside the American Revolution and thus the makeup of the church today resembles the three branches of the U.S. government:

General Conference is thus comparable to Congress in that the delegates are allocated based on church membership population and they write the church laws.

The influence of caucus groups, political action committees, and special interest dark money means that Congress is not representative of the people. While money doesn’t mean success (ie. Eric Cantor, circa 2014), money and caucuses do heavily influence who sees the candidate’s message and thus elects them to Congress.

Delegate selection for General Conference is also a political event not unlike electing Congress. I know because I participated in two delegate elections in 2007 and 2011. In Oklahoma, the Mainstream United Methodists and the Wesley Fellowship caucus groups had their slates of who to vote for, and both times the only delegates elected were on those slates. In a Texas conference in 2007, the entire delegation was line-by-line the same as a Confessing Movement voter guide. I’m certain other annual conferences have similar experiences. The result is that the delegates elected represent the caucus groups interest, not the average Methodist in the pew.

Representative bodies are never truly representative, but controlled by politics, and the same can be said of General Conference in the United Methodist Church.

General Conference is also similar to Congress in that Congress does not accurately reflect the majority of US citizens.

For example, Congress’s religious makeup offers significantly inflated numbers of Jews, Mormons, Catholics, Episcopalians, and Presbyterians compared to the general population. Congress’s economic makeup of over 50% millionaires absolutely doesn’t reflect society. Even with a majority of US citizens affirming marriage equality, Congress could not possibly pass a law supporting it due to its makeup.

For years since their proportional takeover in 2000, Traditionalists have claimed that General Conference is not representative of United Methodism. In Joe Whittemore’s analysis of the 2012 General Conference, he states:

[The] Philippines Central Conference, despite a reported decline of nearly 28 percent in membership since delegation sizes were calculated for the 2008 General Conference, will nonetheless see a 14.3 percent increase in the size of its 2012 delegation…Meanwhile the European Central Conferences, despite a overall membership loss of 8.5 percent, will see no impact on the size of their delegations…The 2nd/3rd-largest areas of the UMC, the United States’ Southeastern and South Central Jurisdictions, respectively, will see their representation diluted…The SEJ, with 24 percent of total UMC membership, will have 22.3 percent of delegates. The SCJ, with 14.4 percent of members, will have 13 percent of delegates.

The noted lack of 100% proportionality is because General Conference includes a bit of the Senate makeup: mandatory minimum representation by an annual conference. Regardless of how small the conference is, regardless of how small that mission field is, they get a lay and clergy voice at the table. Why the South complains about losing a few delegates when they hold the 2nd/3rd highest voting blocs is beyond me.

Finally, to hold General Conference accountable for representing popular opinion in the United States is to forget that the United Methodist Church draws its delegates from across the world.

The journalists I’ve heard make the comments above are probably completely unaware that the United Methodist Church is a global church with over 40% of the voting delegates coming from outside the USA. Yes, the USA is moving quickly on marriage equality. Every new poll has equality creeping up. So it’s a logical question for these journalists to ask “Is the United Methodist Church that out of step with the rest of the nation?”

Obviously the answer is No…but we’re not sending delegates to GC that only represent the United Methodists in the US, in contrast to the delegations of the Episcopalians, Presbyterians, and the ELCA Lutherans who have made progress on human sexuality. Our American UM family is growing in its support of LGBT equality at least as rapidly as the nation, which is now majority supportive. But given our different system, the delegates that are sent to GC do not accurately represent the polls regarding full inclusion.

A Proper Framework for GC

As you can see by the above, General Conference is neither proportional (due to valuing all voices at the table) nor representative (due to politics just like Congress and a voting delegation that is not just national). To compare General Conference action to popular opinion in the USA is to forget that legislative bodies, like Congress, are political and not proportional representations of the public.

In the secular world, this is why most places win civil rights victories via courts, from district to SCOTUS, and why it’s all the more amazing when legislative bodies pass something like marriage equality (ie. in Vermont). Hence why in recent years since the heavy politicking began of General Conference delegates, most of the progress towards LGBT inclusion has been made by courageous bishops, fair-minded judiciaries, and bold annual conferences who are all outside of the legislative process.

The sooner we get into our heads that the doctrine of the United Methodist Church is not written by–nor honestly representative of–the majority of American United Methodists, but rather is the product of a terrific-but-flawed international political process, the better off we’ll be.