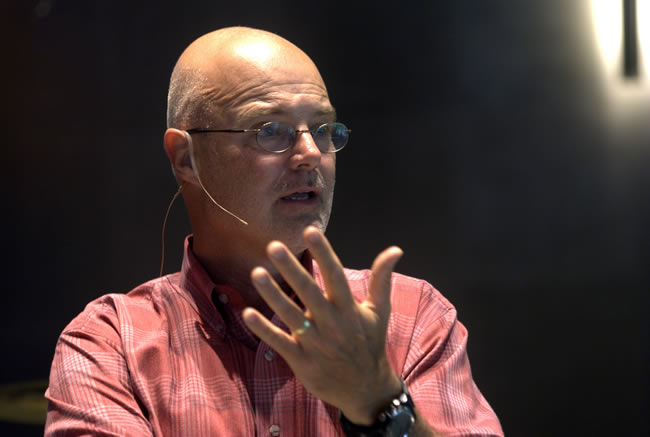 First noted by the Facebook Group “The New Methodists,” Ministry Matters recently had a video interview between Shane Raynor and author Brian McLaren. At the end of the interview, the conversation turned towards unity and schism in the United Methodist Church.

The Folly of Schism

Here’s the Ministry Matters article, but if you just want the video, it’s found here on Youtube starting at the 24th minute.

Like most things involving Shane Raynor, he can’t help editorializing the question he asks. But McLaren’s response is quite good.

The big question is, will the church divide, should it divide, will it stay together? I think the latest thing that has come out is Adam Hamilton from Church of the Resurrection has suggested that we have a local option. Well, you know, a local option a lot of times to United Methodists is anathema because of connectionalism and “are we becoming congregationalist?” if we do that. What is your opinion on what you’ve seen?

I would be very sad if the denomination splits. Let me tell you one reason why. The conservatives who want nothing to do with full inclusion of LGBT people. They need to know that 10 minutes after they split, the child, the son or daughter of 10 of their pastors, in the next year will come out as LGBT. More and more of their children and grandchildren will say they don’t want to go to any church that is unwelcoming to LGBT people.

So there are costs to splitting and many unanticipated costs. So the question is how do you stay together? I’ll just say that Adam [Hamilton] is a brilliant person who everyone should listen to. He has a good heart and a great mind. I think the United Methodist Church has to find a way, if they are going to stay together, they’re going to have to find a way for there to be difference in option.

McLaren is referring to “A Way Forward” which has been discussed for the past few weeks on this blog. Here’s the primary entry and here’s the latest in the series on LGBT voices.

McLaren has an important point that Ben Gosden and I have made before: a split or schism will not remove LGBT persons from any non-affirming jurisdiction or segment, so they will be in this again. It is best for everyone to end the cycle now.

However, the final comment by McLaren at the end is sobering to this solution. Here it is at 26:42:

One more comment: Don’t be naive about the fact that there are people who have been trying to split the United Methodist Church for a long time. And there are political reasons behind this. The issue of homosexuality theologically is related to how we interpret the Bible and so on. But politically, it’s related to a lot of other things. Just don’t be naive about the political forces behind this.

Like any church that has democratic structure and representatives who determine doctrine, politics is part of our way of being. We can lambast it, we can say the caucus groups are terrible, but no amount of railing against it will change that our doctrine and polity are politically influenced and driven.

McLaren’s point is simply to be aware that politics is a driving force behind some efforts toward schism, and it’s hard to tell those who are self-serving when they rattle their sabers. Thankfully, the 80 pastors who are calling for schism will be identified in July (I believe), so we’ll know a bit more clearly from their plan of schism what motivates their actions.

What do you think about McLaren’s primary argument: schism will not solve our “problem?” While I reject the language because we are talking about people, not issues or problems, McLaren is using the mindset of traditionalists with whom he has extensive contact.

I’ve heard one argument saying that the goal is not to exclude LGBT people but to change them and either through ex-gay ministries or the Texas Republican-approved reparative therapy, have them repent of their sin. Pastors do not feel they can do that if they are in a denomination with any ambiguity in it.

As our country becomes more polarized and ghettoized, living into the dissonance of the Gospel and the World becomes harder and harder for people. But I don’t think it is insurmountable. Traditionalists have lived with ambiguity regarding abortion language for several decades in our Book of Discipline and that hasn’t stopped a tremendous number of people from being Methodists. To add another aspect of Traditionalist dissonance for the sake of saving LGBT lives and having LGBT persons participate fully in the life of the church will have a tough period ahead, but it is one we can weather together so long as we authentically tell the difference between self-serving schismatics and heartfelt conservatism.

May the Spirit give us the wisdom in the days ahead to seek a more just United Methodist Church.