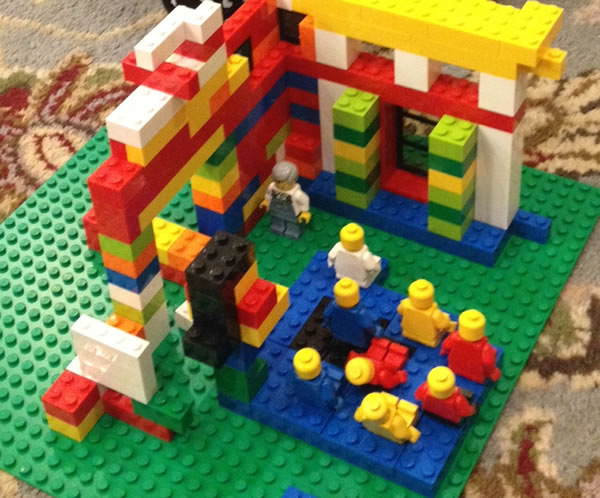 In an effort to not give up on the United Methodist Church, and to seek to find new ways for a divided church to live together, the progressive voices in the UMC have come up with a novel solution:

Let’s play at being Church in a new way.

And it has the power-brokers in the UMC absolutely scared.

Play in the Church?!

Play is not a term that one uses often in Church. In the Spring 2014 issue of FOCUS magazine, a publication by my alma mater Boston University School of Theology, Professor Dr. Courtney Goto names an absence of “play” as detrimental to the church:

Play is often considered frivolous—associated with children, adolescents, and entertainment—and irrelevant to the serious business of Christianity’s role in human liberation and Christian formation. On church grounds, play is often thought to be restricted to areas such as the nursery, the playground, or meeting rooms for youth. Churches intentionally isolate play from “serious” areas like the sanctuary and the pastor’s office. (pg.41)

Play is perceived as “for the children” except while they are in the sanctuary. But why do they play? Play can be seen as rehearsal for future choices and behaviors. Or play can be seen as refinement of tools to use in real life (see UMCLead’s article on “Why Every Pastor Should Play RISK“). And yet play is more than rehearsal or even limited to current realities. Goto continues

Playing allows a person to sense what is true or authentic by inviting the player to enter a world of imagination, creativity, and the senses. This entails setting aside just enough disbelief, appearances, or literal ways of thinking to shift temporarily into another way of engaging reality…In playing, possibilities abound. Alternatives and visions can be inhabited, explored, and abandoned (pg.41)

That’s all very nice. But for a United Methodist Church so distraught, lost, frustrated, segmented, and even sinful…how can play actually lend possibility to the very serious topics at hand?

The answer is this: To play is to show what the alternative looks like.

In a polarized church where no majority has emerged to effect transformative change, perhaps we should turn to play to offer up new possibilities. For oppressed minorities like LGBT persons inside a church that does not affirm their full humanity or participation in the church, play can be a cathartic and liberative act. Goto:

In the midst of slavery, African Americans continued to practice forms of play that preserved human dignity. Reframing an unfathomable reality by temporarily separating themselves from it was key to their survival, giving them hope, dignity, and vision. Playing allowed African Americans to experience who they truly were and to reject racist understandings of slaves imposed in everyday life. (pg.42)

In the spirit of play, the Progressives in the United Methodist Church have created separate (and legal) realities so that they can “play” at what church looks like to them without rule-mongering from the Traditionalists.

Like “house rules” that are variances on the established canon of a game, this allows conferences in more progressive areas of the country to play on a more equal playing field with those more traditional conferences that have long enjoyed their hegemony.

Play that does no harm

The purpose isn’t to play a radically different game. The purpose is to show that the imperfect aspects of a game can be overcome and still have an effective game. And rather than keep telling people this (say, for 40 years), the Progressives are showing by playing the same game in a new way.

That’s why these forms of play ought to be so thrilling to United Methodists in the West and Northern. This is also why play is so dangerous to the standard-bearers and Inquisition leaders in Houston, Indianapolis, DC, and Wilmore (Kentucky). Goto explains why:

By playing, [the slaves] were creating what Jürgen Moltmann calls an “anti-environment” or a “counter-environment.” Such an environment opens people to “creative freedom and future alternatives” through “conscious confrontation.” Playing with more liberating possibilities is vital to exploring them, claiming them, and making them real. (pg.42)

The Traditionalists want us to believe that our situation is untenable or our problems are intractable and schism is the only possible way forward. But such scorched-earth games are short-sighted. By seeing the actions by Progressives as forms of play that allow for new realities to come forth, these actions return United Methodism to its core purpose: making disciples of Jesus Christ for the transformation of the world.

Allowing conferences to play with new realities does no harm to other conferences playing by different rules, and empowers progressive conferences to make real their dreams and visions for the United Methodist Church. A rising tide lifts all boats! Indeed, it may show people what possibilities may be present to break through the ecclesial logjam and allow us to be one Church again in mission, ministry, and expression of grace, pregnant with possibility, to a world of polarization and cynicism.

Instead of taking our balls and going home in schism, let’s play it out and allow more variance in how we do church.

Let’s play our common game with a new set of rules so that the world can choose which variation they are attracted to in different contexts.

Let’s play this game that may become attractive to our cultures, and in doing so, may our game become one game (with no house rules) that everyone wants to play (see “The Release of Methodism 2.0“).

Because in play, in possibility, there is hope for more than we have now.

The Holy Spirit works within and among the willing faithful to empower them to do what they cannot accomplish alone. In Jesus’ life, it was in healing the sick and raising the dead. In contemporary times, playing can contribute to the process of liberation. Any leap toward freedom inevitably involves death— perhaps the death of holding patterns that have long held one captive—and it involves resurrection, including the birth of new critical awareness and more abundant ways of thinking, feeling, and doing. (pg.42)

(EDIT: corrected the first entry about the New York Annual Conference to narrow it to the marriage question)